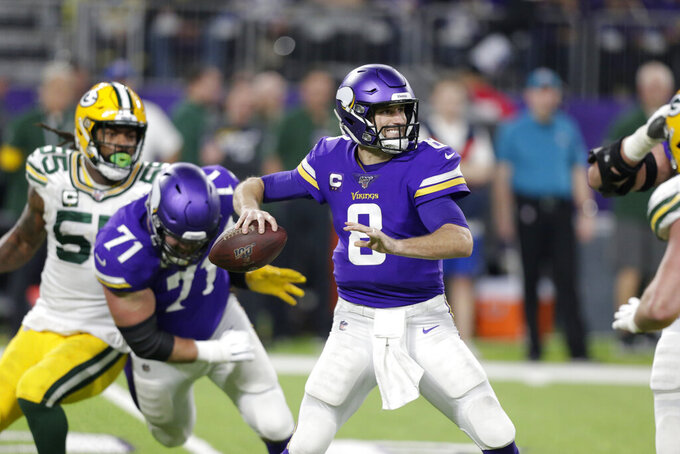 FILE - In this Monday, Dec. 23, 2019 file photo, Minnesota Vikings quarterback Kirk Cousins throws a pass during the second half of an NFL football game against the Green Bay Packers in Minneapolis. Minnesota Vikings quarterback Kirk Cousins says he’s unconcerned about catching the coronavirus. He says his worry on a scale of one to 10 is “about a 0.000001.” Cousins made his comments on a wide-ranging interview for an NFL-themed podcast that was released on Wednesday, Sept. 2, 2020. (AP Photo/Andy Clayton-King, File)

MINNEAPOLIS (AP) — The most consistent weapon the Minnesota Vikings have drawn against Aaron Rodgers since he became Green Bay's quarterback has been a defense built around a relentless pass rush and revved up by a raucous home crowd.

“We’ve done a fantastic job of getting rowdy, and we’re not going to be able to replace that," Vikings linebacker Eric Kendricks said. "It is what it is, but as far as the whole thing with playing with no fans, I feel like we’ve already kind of known that going into the season, so we’ve been mentally preparing for that. We still have to get ready to play the game.”

For the first time in the franchise's 60 seasons, the Vikings had their opener scheduled at home against the rival Packers, an immediate opportunity to avenge their decisive defeat at U.S. Bank Stadium on Dec. 23, 2019, that clinched the NFC North for Green Bay.

The Vikings' defense that has been dominant since head coach Mike Zimmer arrived in 2014 saw its effectiveness wane a bit last year and will have only five starters in the lineup on Sunday afternoon carried over from 2019. Five of the departed are on other teams, and end Danielle Hunter is injured and won’t face the Packers. There will be no crowd to draw from, either, only pre-recorded noise in a casualty of the COVID-19 pandemic.

“The motivational part and the extra push by the fans and seeing everybody up there is not going to be there, so you’ve got to lean on your teammates and just be ready to play,” Vikings running back Dalvin Cook said.

Vikings quarterback Kirk Cousins had a career-best season in 2019, but that was in spite of, not because of, his performances against the Packers. He threw three interceptions, half of his total for the year, and posted by far his two lowest passer ratings of the year: 52.9 and 58.8.

Green Bay's ability to generate a pass rush without sending blitzers was a big reason for this. Za'Darius Smith had 3 1/2 sacks in the second matchup, the most by a Packers player in seven years, and was credited with six quarterback pressures.

“You’re just aware of where we came up short. You’re aware of how you need to be better. I think they did a great job defensively, and we’ve got to have a great plan, and then we have to go execute that plan,” Cousins said.

The absence of the two-time Pro Bowl pick Hunter will be a relief for the Packers, who have yet to declare their starting right tackle. Rick Wagner was signed as a free agent after being released by Detroit. Minnesota native Billy Turner has been the front-runner, but he's battling a knee injury.

“He’s doing everything in his power to come back, and if he’s available and ready to play, then we’ll have a decision to make,” coach Matt LaFleur said.

Cook signed a five-year, $63 million contract extension on Saturday, receiving some added security the day before the season opener. Negotiations stalled earlier in training camp, but Cook never expressed any discomfort practicing or playing without a new deal.

“If coach Zimmer calls my name, I’ll be out there," said Cook, who missed the home game against the Packers last year because of a shoulder injury, but had 191 yards from scrimmage at Green Bay.

RIPE FOR THE PICKING?

Three of Minnesota's six new starters in the nickel defense will be cornerbacks, with Mike Hughes, Holton Hill and either Jeff Gladney or Cameron Dantzler, both rookies. All six cornerbacks on the roster are 23 years old or younger.

Fortunately for the Vikings, safeties Harrison Smith and Anthony Harris still form one of the league's best tandems. They'll be important not only for their own play but also for their guidance of this inexperienced group.

“The first thing I would mention is that the play might be longer than you’re used to. Every play seems to last a little longer when you play Aaron Rodgers and the Packers,” Smith said. “Everybody has an internal clock to some degree of how long a play is, and normally it lasts a little longer, so you might get a little more fatigued. You can’t relax when you think a play’s over.”

THE TIME IS NOW

Rodgers is 6-6 in his career at Minnesota, less than three months from his 37th birthday and likely in the twilight of his time in Green Bay after quarterback Jordan Love was drafted in the first round.

“Where he left off, man, he had a nice, clear mind,” wide receiver Davante Adams said. “He seemed like he was kind of in a different space. Coming into this year, you see that magnified a little bit. I’m excited for the juice that he’s been bringing, the attitude he’s been bringing.”