Von Miller under investigation by police in suburb of Denver 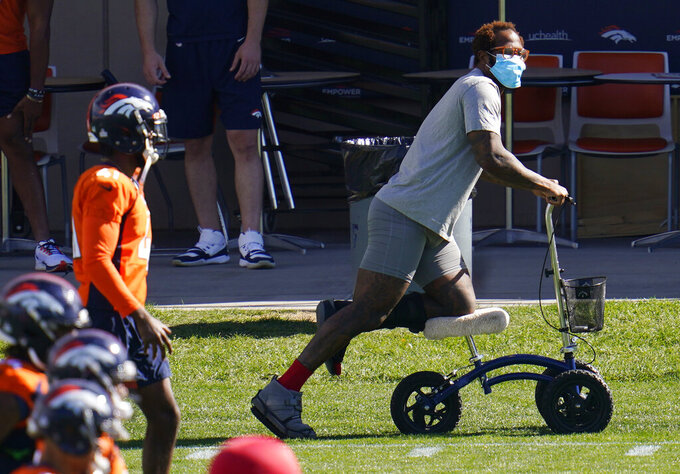 Injured Denver Broncos outside linebacker Von Miller uses a scooter to maneuver around as his teammates warm up before taking part in drills during an NFL football practice Wednesday, Oct. 14, 2020, at the team's headquarters in Englewood, Colo. (AP Photo/David Zalubowski)

DENVER (AP) — Broncos linebacker Von Miller is under investigation by police in a Denver suburb.

Parker Police Department spokesman Josh Hans confirmed the investigation Friday, but couldn’t provide additional details. Hans wrote in an email that, “if the investigation determines a crime has occurred, charges will be submitted to the DA’s Office for their review.”

The Broncos released a statement saying they were "aware of an investigation involving Von Miller and are in the process of gathering more information.”

Miller missed the 2020 season with an ankle injury he suffered just before the opener.

The Broncos have a decision to make on Miller for next season. They hold a club option that must be exercised by the first day of the new league year in March that would guarantee him $7 million.

The 31-year-old Miller is due $17.5 million in salary in 2021, the final year of the seven-year, $114 million contract he signed months after his Super Bowl 50 MVP performance.

Miller has 106 career sacks in 135 games since being taken second overall by Denver in the 2011 draft. He's been selected to the first-team All-Pro squad three times.