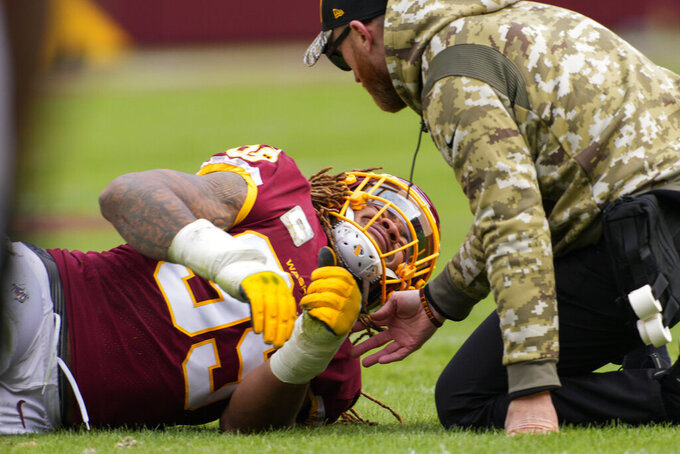 Washington Football Team defensive end Chase Young (99) is attended to after a play during the first half of an NFL football game against the Tampa Bay Buccaneers, Sunday, Nov. 14, 2021, in Landover, Md. (AP Photo/Nick Wass)

Chase Young will not play the rest of this season after injuring his right leg and is scheduled to undergo surgery.

Washington coach Ron Rivera confirmed the prognosis for Young on Monday in the wake of the reigning Defensive Rookie of the Year going down during the first half of an upset of defending Super Bowl champion Tampa Bay.

Rivera did not reveal whether Young tore the ACL in his right knee and did not specify what the surgery is for. Washington said Sunday that Young left the game with a knee injury, and Rivera said it was possibly an ACL tear.

The 2020 No. 2 pick finishes his second NFL season with 1 1/2 sacks. Rookie Shaka Toney is among the pass rushers who will fill in for Young at Carolina and the rest of the year.

"We’re going to rely on some young guys to step up and get opportunities," Rivera said.

Young got hurt Sunday while trying to get past left tackle Donovan Smith in order to pressure Buccaneers quarterback Tom Brady. He ended up on the grass, wincing and writhing around on the ground for a bit, all the while keeping his right leg straight.

After Young was checked by team trainers, a cart was driven out onto the field. But Young declined to get on and be driven off, instead motioning for teammate Brandon Scherff to give him a hand to help stand up.

Young then headed toward the locker room, draping his arms on the shoulders of two people for support while he limped off. He gave teammates a speech of encouragement at halftime and returned to the sideline on crutches later.

Washington's defense shined with and without Young against Brady and the Buccaneers, pressuring the 44-year-old quarterback plenty and intercepting him twice. Third-down defense, which was the unit's worst category during the first few games of the season, was much better, holding Tampa Bay to a 40% conversion rate.

“We eliminated the stupid mistakes,” defensive tackle Jonathan Allen said. “We made them drive the length of the field and not go over the top on us. This is what happens when you do things the right way. But what separates the good teams from the bad teams is being able to do this on a weekly basis.”

The offense is clicking, too, with quarterback Taylor Heinicke showing off some of the chemistry he has developed with the receivers. Heinicke isn't perfect, but the clock-killing, 19-play, 80-yard drive over 10:26 showed how he could manage a situation like a veteran and Washington's ability to run the ball.

“One of the things I was really pleased with was that we were able to run the ball when we knew they knew we had to run the ball,” Rivera said. “That was big.”

Red zone offense is still a bit of a concern after settling for two field goals from new kicker Joey Slye. Washington benefitted from a pass interference penalty on the undisciplined Buccaneers that set up an 1-yard touchdown run by Antonio Gibson, but the offense will still want to work on getting into the end zone consistently beginning Sunday at Carolina.

Allen continues to be Washington's best defensive player. He leads the team with six sacks and is justifying every penny of the $72 million, four-year extension he signed on the eve of training camp.

Cornerback William Jackson III took an unnecessary facemask penalty on the final play of the second quarter Sunday, allowing Tampa Bay to get a field goal on an attempt that never should have happened. He did pick off Brady on a ball that tipped off Bucs receiver Jaelon Darden's hands, but the big-money free agent addition is still working to find consistency in defensive coordinator Jack Del Rio's system.

Beyond Young and the absence of fellow pass rusher Montez Sweat, Washington's other new injury is to tight end Ricky Seals-Jones, who Rivera called day to day with a right hip injury. Rookie right tackle Sam Cosmi was in uniform against the Buccaneers after getting cleared from an ankle injury but did not play.

1991 — The previous time Washington put together a drive of 19-plus plays as it did Sunday came 30 years ago, on the way to the franchise's third and most recent Super Bowl title.

Prepare for Cam Newton and the Panthers this weekend in Rivera's return to Carolina. The Panthers are 2½-point favorites, according to FanDuel Sportsbook, after blowing out Arizona 34-10.