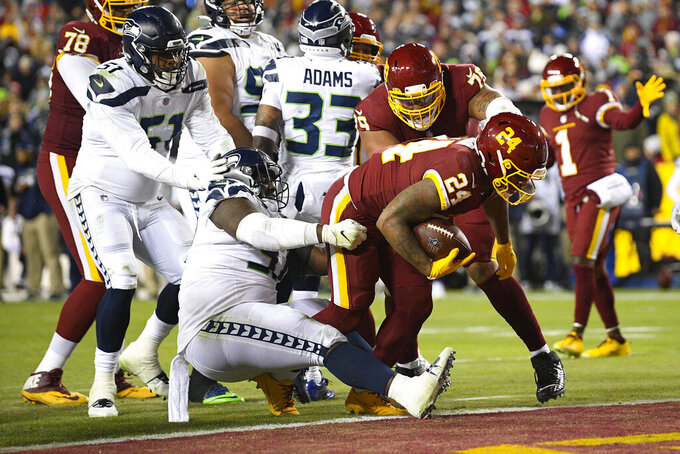 Washington Football Team running back Antonio Gibson (24) scores on a two-point conversion against the Seattle Seahawks during the second half of an NFL football game, Monday, Nov. 29, 2021, in Landover, Md. (AP Photo/Nick Wass)

The recipe involved running the ball, controlling the clock and shortening games. The result has been a three-game winning streak to move into the final playoff position in the NFC at 5-6.

A strong running game led by second-year back Antonio Gibson has been at the heart of it. Washington outrushed the Seattle Seahawks 152 yards to 34 in beating them 17-15 on Monday night.

“It’s interesting because if you go back and you look at the statistics of who wins the Super Bowl and how do they win it, it all points to the yards rushing,” Rivera said. “There is a physicality and mentality to it. If you can throw the ball well and yet at the same time still be able to keep that run game going, I think if you come up against a team that all they do is rely on the passing game, you have a chance, I think, to win and win big, and the reason being so is you can grind it out.”

Rivera pointed out that Washington has been able to minimize the impact of quarterbacks Tom Brady, Cam Newton and Russell Wilson by keeping them off the field. Brady made some self-inflicted mistakes that hurt Tampa Bay, but since then Washington had a time of possession edge of 39:08-20:52 against Carolina and 41:40-18:20 against Carolina.

Gibson's growth, quarterback Taylor Heinicke's evolution as a game manager and the play of the offensive line have paved the way for this style of play. Gibson had a career-high 29 carries for 111 yards against the Seahawks, something he thought would have been “crazy” when he was a receiver at Memphis.

“(It's) starting to look good for us: holding the ball, taking control of the game,” Gibson said.

The defense ranks fourth in the NFL since Week 10, allowing 279 yards a game. Rivera credits better communication, and using Landon Collins as a hybrid safety/linebacker has helped get playmakers Kamren Curl and Bobby McCain on the field.

“With Landon, it gives us an opportunity to take advantage of a skillset that I really appreciate,” Rivera said, comparing Collins to Shaq Thompson playing the “buffalo nickel” position with Carolina. “When you watch Landon, you watch his productivity over those last few weeks, what he’s done and how he’s impacted games, that's pretty special.”

Washington is on to its fourth kicker after Joey Slye pulled his left hamstring chasing down Rasheem Green on the blocked extra point attempt Monday night. The team signed Brian Johnson, who was on Chicago's practice squad and spent time earlier this season with New Orleans.

Johnson made all eight of his field-goal attempts with the Saints, but missed three extra points and was released after four games. After releasing Dustin Hopkins and having blocked kick problems with Chris Blewitt, Rivera said Washington wanted a kicker who can get the ball in the air quickly and elevate it.

DeAndre Carter continues to be Washington's best free agent signing, and it goes beyond his return specialties. Carter made four catches for 42 yards against the Seahawks and has developed chemistry with Heinicke.

Rookie cornerback Benjamin St-Juste has not gotten a defensive snap in either of the past two games. That's more a credit to Kendall Fuller and Danny Johnson than a knock on the third-round pick, but he looks more like a developmental prospect than a part of the current secondary.

"We’ve just been very pleased with what we’ve gotten from the guys that are on the field right now," Rivera said. “Benjamin’s still a young man that’s in our plans. We believe he’s got a bright future, and it’s just a matter of opportunities coming up again because it’ll happen.”

In addition to Slye's absence, Washington could be without running back J.D. McKissic and interior offensive lineman Wes Schweitzer. McKissic was carted off in the final minutes against Seattle with an undisclosed injury, and Schweitzer's ankle injury pressed fourth-stringer Keith Ismael into snapping duty at center.

Rookie right tackle Sam Cosmi will miss at least the next two games with a hip injury after going on injured reserve Monday. Rivera said the team did it out of necessity to open a spot for tight end Logan Thomas, who was activated off IR after missing six games with a hamstring injury.

Try to prepare to visit Las Vegas on a short week, which is especially challenging given that the Raiders played on Thanksgiving and will have a big rest edge.