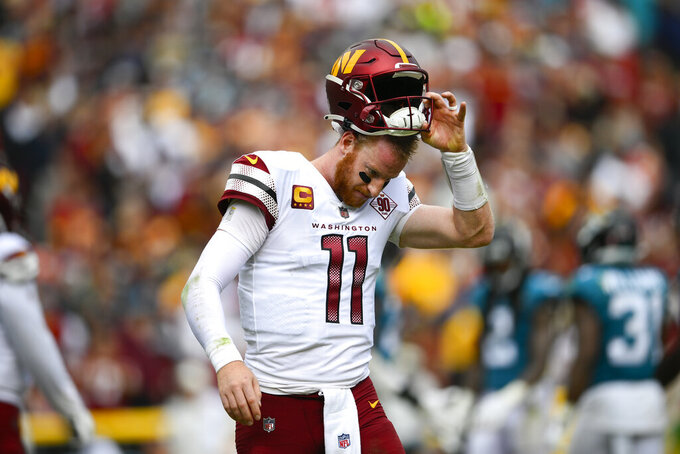 Washington Commanders quarterback Carson Wentz (11) taking off his helmet as he heads back to the sidelines during the second half of an NFL football game against the Jacksonville Jaguars, Sunday, Sept. 11, 2022, in Landover, Md. (AP Photo/Nick Wass)

“Hey, you're going to have to win this,” Rivera said. Wentz responded, “I will," before walking away.

Wentz did just that, rebounding from the costly mistakes to complete his third and fourth touchdowns and lead Washington a 28-22 comeback victory against the Jacksonville Jaguars on Sunday in his debut for the team now known as the Commanders.

"You make a couple bad plays, it’s time to go fix it," Wentz said. "It’s a tough stretch there to bounce back from, but guys did a good job. Everybody was rallying around each other, and obviously we got it done.”

It was Wentz's first four-TD game since the day he tore the ACL in his left knee while with the Philadelphia Eagles in 2017. And it came with former Eagles coach Doug Pederson on the visiting sideline in charge of the Jaguars for the first time.

“He played a heck of a football game," Pederson said. ”Showed a lot of composure and brought his team back. Hats off to him and his team for doing that."

Wentz connected with Terry McLaurin on a 49-yard TD and then hit rookie Jahan Dotson in the end zone from 24 yards out to put the Commanders ahead with 1:46 left after they squandered an early lead. With fans chanting, Wentz engineered a 13-play, 90-yard drive that kept him from losing to the Jaguars in consecutive games following a similar two-turnover effort in Week 18 last year with the Indianapolis Colts.

He finished 27 of 41 for 313 yards and produced enough points to make up for two bad mistakes on the interceptions.

"To come back and respond in the way he did, I think that’s the true test of his character," McLaurin said. “The real key point is just the way he responded and the way he came back and stayed poised under pressure and hit the throws that he needed to to win the game.”

Jaguars second-year QB Trevor Lawrence was intercepted with 1:10 to go, ending any chance of a comeback by the team that was last in the league each of the past two seasons. Lawrence was 24 of 42 for 275 yards, a touchdown pass to James Robinson and the pick. Robinson also ran for a touchdown.

Pederson said the Jaguars beat themselves, and there were notable mistakes that kept points off the board. Lawrence overthrew Travis Etienne early on what should have been an easy TD, Jacksonville failed to convert on fourth down deep in Washington territory and kicker Riley Patterson hit the right upright on a 37-yard field goal attempt.

“We shot ourselves in the foot a lot,” Lawrence said.

The Jaguars lost on the road for an 18th consecutive game and extended their NFL-record streak of losses to NFC opponents to 17.

After missing much of last season with a nagging groin injury, Curtis Samuel showed early why the Commanders signed him to a $34.5 million, three-year contract in 2021. Samuel caught eight passes for 55 yards and a touchdown and also ran four times for 17 yards.

When he reached the end zone on his first touchdown since Nov. 22, 2020, with Carolina, Samuel said out loud, “I'm back.”

“Curtis, that’s what we’ve been hoping for,” Rivera said. “That’s the guy that we know what he’s capable of and he came out and played to his ability, played to his skillset.”

No. 1 pick Travon Walker became the first rookie since T.J. Watt in 2017 to have an interception and a sack in his NFL debut. Walker, who came down with Wentz's second interception, said he had a pick in practice and called his dad to tell him he'd do the same for real in a game.

“It will have to be more than just one sack, one pick,” Walker said. “Obviously we didn’t win the game so therefore a player like me that they drafted No. 1 is supposed to make plays like that, so I need to keep continuing to play better.”

Jaguars free agent signing Christian Kirk made six catches for 117 yards, including a 49-yarder, in his first game with the team. Kirk signed a $72 million, four-year contract with Jacksonville, which spent the most money of any team in the league in free agency the past two offseasons.

Washington defensive back Mike Bass had his name and No. 41 added to the team's ring of honor at FedEx Field. Bass played seven seasons with Washington from 1969-75.

Jaguars: DT Foley Fatukaski was active after being limited in practice all week with a calf injury.

Commanders: Rookie DT Phidarian Mathis injured his left knee in the first quarter and was carted off the field. Rivera said the team was “concerned” about the severity of the injury. ... RG Wes Schweitzer left in the second quarter with a hamstring injury and was replaced by Trai Turner, and Washington also rotated guards all game.