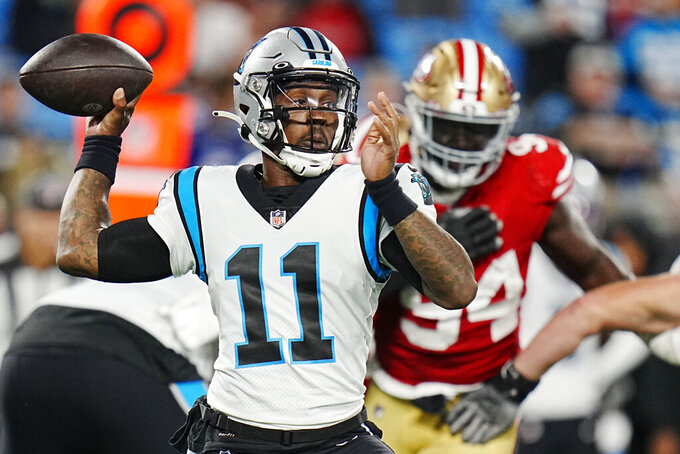 INGLEWOOD, Calif. (AP) — Not many NFL offenses have struggled more than the Los Angeles Rams' unit this season.

The Carolina Panthers' offense is one of them.

Wilks' quarterback is all but certain to be P.J. Walker, the seldom-used veteran backup who's the last man standing behind Baker Mayfield and Southern California natives Sam Darnold and Matt Corral.

“I’m confident in P.J., and I think the players are confident in P.J.,” said Wilks, the fourth head coach in the past four seasons for a franchise that had only two coaches in the previous 17 seasons. “This is one of those situations where, you’re sitting where we are right now this season, and everybody could start pressing and trying to do things outside the system. We don’t need one guy to go out and win the football game. Just go out and do what you do.”

The Rams haven't been able to do practically anything consistently on offense, with a barely functional running game and an NFL-high 21 sacks allowed. Although offensive line injuries are the primary culprit, mistakes and missed assignments have infected the entire group to a degree that coach Sean McVay has rarely seen in his six seasons.

“It’s hard to beat another team if you don’t stop beating yourself,” McVay said. “So those are the things that we’ll continue to focus on: great communication, great command, great clarity from us. I do believe those things are correctable, and I think that’s going to be reflected this week.”

A struggling opponent in turmoil would seem to be an ideal foe for the Rams, whose back-to-back losses to San Francisco and Dallas have put them below .500 for only the second time in McVay's career. But a coach's firing frequently generates energy in professional team sports, and Carolina is equipped to cause problems for the Rams' dismal offensive line with stalwarts Brian Burns and Derrick Brown up front.

“They're a really impressive group,” Rams quarterback Matthew Stafford said, singling out Burns and linebacker Shaq Thompson. “Probably in a little bit of a transition with what's gone on, so there's an element of that to get ready for, but you've really got to just go out there and trust your rules and play.”

Wilks said the plan is for the Panthers to be more aggressive on offense and not allow opposing defenses to dictate what they do.

That might mean more downfield passes -- something the Panthers haven’t done much of this season.

“We aren’t going to sit back and react to the defense,” Wilks said. “We want to put pressure on them and have them react to us and mix things in, whether it’s inside or outside on the perimeter, and then try to go over the top.”

NFL receptions leader Cooper Kupp has been the best part of the Rams' offense, racking up 49 catches for 527 yards and four TDs. Jaycee Horn has been one of the NFL's top cornerbacks in coverage this season, but he missed practice time this week with a rib injury after being unable to finish last week's game.

The Panthers signed receiver D.J. Moore to a three-year, $61.8 million extension this year, but his production has suddenly dropped off.

Moore, who is coming off three straight seasons with at least 1,150 yards receiving, has 17 catches for 197 yards and one touchdown through five games with Mayfield at the helm. Mayfield and Moore appeared to have great chemistry in training camp, but it hasn’t translated to games, in part because of Mayfield’s accuracy issues.

Wilks is hoping to get Moore more involved in the offense, whether Mayfield or Walker is playing.

The Rams will see a familiar face on the Panthers’ offensive line: right guard Austin Corbett, who built a career in Los Angeles and won a Super Bowl ring before leaving last spring for a three-year, $26.25 million deal in free agency. The Rams promoted from within to replace him, but the first two contenders — Coleman Shelton and Tremayne Anchrum — are both hurt. Alaric Jackson is the current starter, but the longtime tackle doesn’t appear to be adapting swiftly to guard.

Thompson said this may be a good week for the Panthers to get away from home and play a road game, given the firing of Rhule and the team being roundly booed in recent weeks at home.

“We’re playing against the world champions,” Thompson said. “They just came off a loss at home like we did, and we’re going to trying to give them another one.”