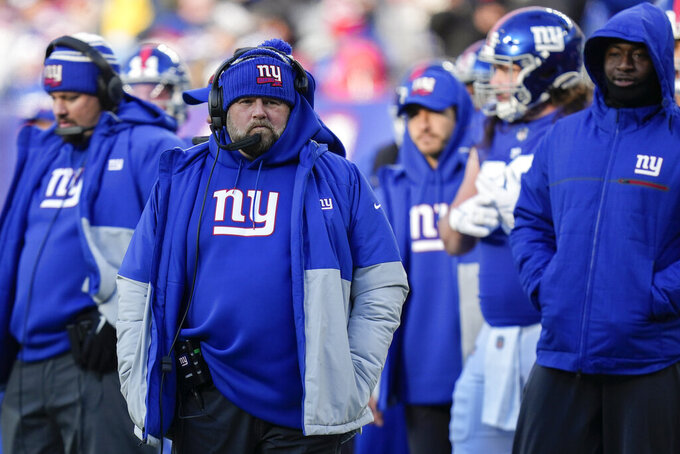 EAST RUTHERFORD, N.J. (AP) — While the Detroit Lions are starting to find their way under second-year coach Dan Campbell, the New York Giants looked lost for the first time this season under first-year coach Brian Daboll.

“Everything that we said we had to do and needed to do to beat this team, we did that for almost all of the game,” Campbell said. “There were a couple of spots in there. These guys are playing their (butts) off and they’re starting to figure out a way to win.”

Defensive end Aidan Hutchinson, the No. 2 overall pick in the draft in April, intercepted a pass and recovered a fumble to help set up 14 points. Jared Goff and the Lions' offense didn't have a turnover for the second straight game.

Michael Badgley added a 24-yard field goal for Detroit (4-6), which until beating Chicago 31-30 last week had not won a road game under Campbell.

The mistake-prone Giants (7-3) got 3-yard touchdown runs by Daniel Jones and Matt Breida. Jones also threw a meaningless late TD to Richie James but also was intercepted twice, his first picks since Week 3.

Jones' touchdown run gave the Giants a 6-3 lead late in the first quarter and New York was still in front with a little more than six minutes left in the half when Hutchinson changed the momentum.

Jones (27 of 44 for 341) dropped back to pass on a second-and-6 at his own 31. He didn't see Hutchinson drop back in coverage and the big man made his second interception of the season at the 37 and returned it 19 yards to the 19. Williams scored three plays later and the Lions led 10-6 and never trailed again.

Jones said he never saw Hutchinson drop back, and said it was simply a good play by the Lions rookie.

“That was the play that we needed at that moment,” Campbell said. “Look, this is why they’ve (the Giants) won. They play the long game, they play smart football and they wait for the opponent to beat ’em and they capitalize on a mistake.

"We were able to play that game today ourselves.”

“He’s our horse,” Goff said of Williams, who has 12 rushing touchdowns this season. “Anytime we get down there, tight in the red zone, it feels automatic with him at times. As a quarterback, sometimes you want to throw them in, but Jamaal is automatic.”

“I think we’re all pretty disappointed with our effort today and how we played," Jones said, "and we’re not up to our standard to, you know, what we’re capable of doing.”

Giants: Travel to Dallas for a rare Thanksgiving game for New York.