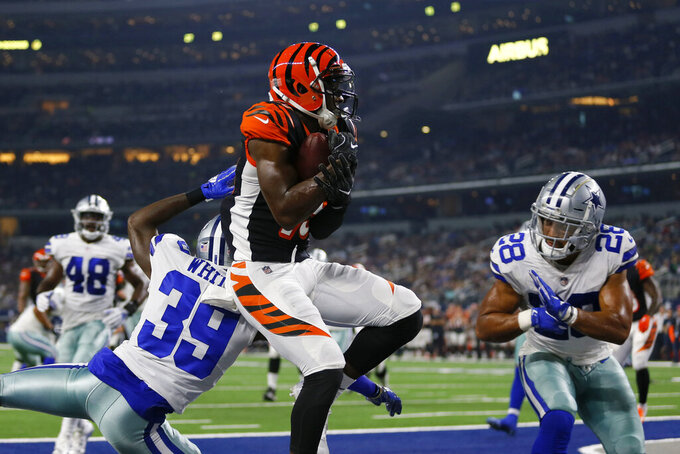 CINCINNATI (AP) — John Ross III spent a couple of weeks catching passes from Andy Dalton on the scout team during Bengals practices, something neither of them imagined doing when the season began.

Ross was recovering from a shoulder injury. Dalton was banished to backup role while coach Zac Taylor got a look at rookie Ryan Finley for three games.

Ross and Dalton put their time to good use, re-establishing their timing on pass routes. They're back together again Sunday when the Bengals (1-11) play in Cleveland (5-7) with an offense that's starting to look familiar.

The Bengals set a club record by dropping their first 11 games, with the offense struggling to run the ball or complete deep passes. They lost both of their deep threats when A.J. Green tore his left ankle during training camp and Ross landed hard on his right shoulder and dislocated it during a 27-3 loss in Pittsburgh the fourth week of the season.

It was an especially difficult setback for Ross, a first-round pick who missed 16 games his first two seasons because of shoulder, knee and groin injuries. He was sidelined for much of camp this year with a hamstring injury, but finally emerged as a threat in the first four games.

Ross had 16 catches for 328 yards — a 20.5 average — with three touchdowns, including a 55-yarder in the season opener in Seattle and a 66-yarder in the second week against San Francisco. Two weeks later, he was back to rehabilitating an injury.

"You feel like you've finally got it and you finally figured it out and I felt like I was so ready and everyone could see it was going up," Ross said. "Then to have it at a standstill kind of sucks."

Ross spent a lot of time in the offseason conditioning so he could avoid the muscle injuries that slowed him the first two years. The latest injury was the result of landing wrong on his shoulder while being tackled.

“I felt like I had done everything I was supposed to do to prevent a lot of soft tissue injuries and then I go out and get something that is a rare injury,” Ross said. "It's almost like sometimes woe is me."

Ross got past the woeful feeling and gets to be part of what the Bengals hope will be soothing final month in their fourth straight losing season. Although Green will miss the game in Cleveland, Ross' return gives the offense a big-play dimension it has lacked with both of them hurt.

“The whole speed factor,” Dalton said. "Regardless of what he’s doing, wherever he lines up, they’re going to know that he’s the fastest guy in the league. His ability to play at that level and to have that speed on the field helps us out a lot.”

Tyler Boyd has been the only consistent threat, catching 68 passes for 758 yards and three touchdowns despite being the focus of opposing secondaries.

“The thing is, we get John Ross back,” running back Joe Mixon said. “That helps me a lot, and that helps Tyler a lot and also Andy.”

“He’ll have a spot on the offense moving forward for sure,” Callahan said. “He’s got speed that people fear. We would like to get that back on the field.”

Notes: Defensive end Sam Hubbard was held out of practice Wednesday with a sore knee, but Taylor expects him to play in Cleveland. Linebacker Nick Vigil (ankle) and safeties Shawn Williams (ankle) and Brandon Wilson (hand) were limited. ... Receiver Damion Willis signed onto the practice squad. The rookie had nine catches for 82 yards in 10 games. He was waived Tuesday to open a spot on the active roster for Ross.