Colts bottom out in blowout loss to Saints 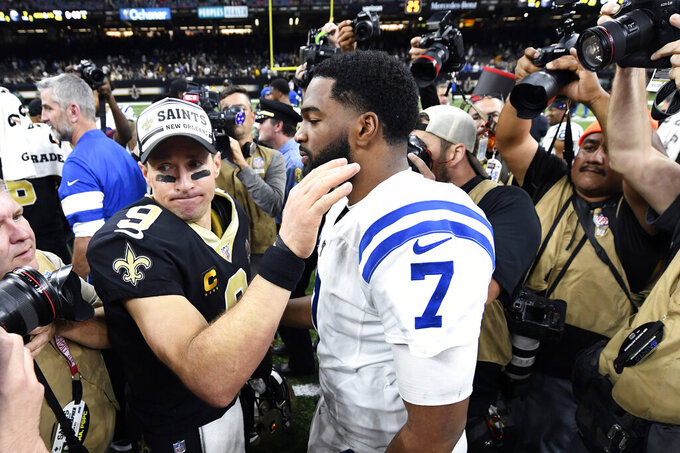 On the next play, a holding penalty wiped out a punt that was downed at the Saints 2-yard line. When Rigoberto Sanchez punted again, the Saints' Dwayne Washington deflected it.

It was a rough start for Indianapolis — and it didn't get any better.

The Saints scored on their first six series, including four touchdown passes on a record-setting night for Drew Brees. Shredding the Colts’ secondary, he set an NFL single-game mark for accuracy, going 29 of 30 for 307 yards in New Orleans' 34-7 victory Monday night.

The Colts (6-8) were eliminated from the playoff race with their fourth consecutive loss and sixth in seven games overall.

They were tied for the AFC South lead as recently as Nov. 17, but had nothing left in New Orleans in a collapse that bore no resemblance to their other, far more competitive losses.

“It’s hard to swallow, and that starts with me,” coach Frank Reich said. “I’ve got to get the guys prepared better and we have to coach better. We got our butts beat in all three phases. Obviously we haven’t had one like this.”

The Colts had either led or been tied in the second half in 12 of their first 13 games. The lone exception was a tight 31-24 loss to Oakland.

Brissett struggled with his accuracy, completing 5 of 15 passes in the first half and 10 of 22 through three quarters.

Indianapolis wasn't able to get anything going on the ground either. It averaged 2.7 yards on 17 carries with a long gain of 7.

The Colts never picked up more than two first downs on a drive until late in the fourth quarter, when they averted a shutout with an 80-yard touchdown drive.

The Saints gave up 48 points in a loss to San Francisco in their previous game Dec. 8.

“There were a lot of self-inflicted things,” Brissett said. “It starts with me playing better and trickles down. Today was rough.”

It also was a rough one for the Colts’ defense, which did not force a punt until the fourth quarter.

When Brees broke the NFL record for career touchdown passes in the third quarter, the Colts were completely fooled by a play-action fake, letting tight end Josh Hill run free into the left side of the end zone on first-and-goal from the 5 — even though everyone in the Superdome knew Brees was going to throw.

“It was one of those performances you don’t want to be a part of,” cornerback Pierre Desir said. “This is hard.”

Penalties were a problem, too, particularly on the deflected punt.

Not only did the deflected punt travel only 3 yards, but another flag on Indianapolis for holding allowed the Saints to start their initial drive at the Indianapolis 33 — a difference of 65 yards.

“You play this game to win championships, and now to not even be able to compete for a championship stinks,” linebacker Darius Leonard said. “I just don’t know what went wrong.”