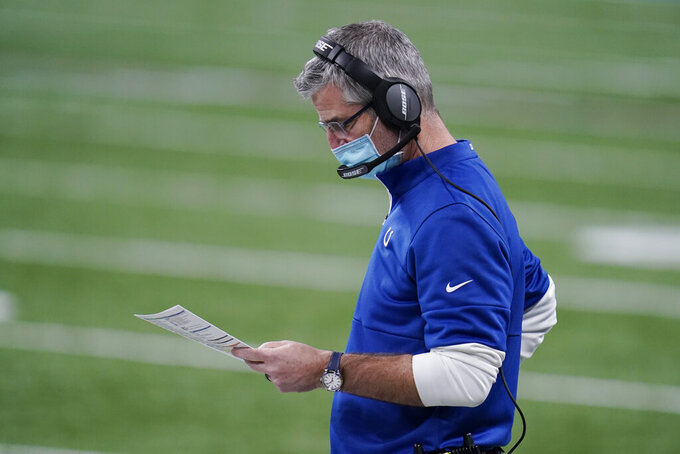 Indianapolis Colts head coach Frank Reich looks at his play chart during the second half of an NFL football game against the Jacksonville Jaguars, Sunday, Jan. 3, 2021, in Indianapolis. (AP Photo/Michael Conroy) 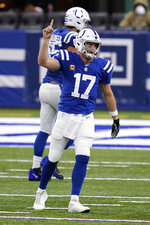 INDIANAPOLIS (AP) — Six times, Philip Rivers led the the Chargers to the playoffs. Six times, he failed to reach the Super Bowl.

The one time Rivers got close, he played with a serious injury.

Now the 17-year veteran will get one more chance — perhaps his last — to earn that elusive Super Bowl ring, this time with the Indianapolis Colts. The quest begins Saturday at Buffalo.

“He’s had an unbelievable career and fulfilling that dream starts with getting in (the playoffs),” coach Frank Reich said. “That’s where we want to end up, that’s where he wants to end up. We have to seize the opportunity. ... Let us be the first seventh seed to win a world championship.”

Twelve months ago, almost nobody gave Rivers a chance.

When he threw 20 interceptions in his final season with the Chargers, most figured the 38-year-old's was over. Rivers wasn't ready to call it quits, though.

Instead, the trash-talking quarterback with the shot put-like throwing motion acknowledged making too many mistakes in 2019 and insisted there was still some juice in his right arm. Reich and general manager Chris Ballard pored through game tapes before agreeing to take a low-risk, one-year, $25 million flier on an eight-time Pro Bowler.

Rivers made the Colts' bet pay off — handsomely.

But Rivers refuses to worry about the one glaring omission on an otherwise sterling resume.

“It’s really hard to put into words and really maybe make someone understand or believe you, I guess," he said Tuesday.

“Do I want to be a part of a team and help a team win a championship? Of course. But that’s not the only driving factor to play. It’s really not. ... Is that the ultimate goal this year and right now as we sit here? No question it is, but I don’t carry that with me day-to-day that, ‘Man, played 16 years, never been a part of a championship.’ I really don’t.”

The reasons are many.

He backed up Drew Brees for two seasons before running into roadblock after roadblock.

When Rivers finally reached the AFC championship game, at New England in January 2008, the Chargers never really had a chance.

Rivers played despite tearing the anterior cruciate ligament and meniscus in his right knee during the previous week's victory at Indy, and Hall of Fame running back LaDainian Tomlinson was forced out after only two carries because of a sprained medial collateral ligament in his left knee. The result: New England 21, San Diego 12.

“The thing about playoff games, unless you win it all, you’re obviously going to lose one,” said Rivers, who is 5-6 in the postseason. “The games we’ve won, you didn’t go back and go, ‘Man, you could make highlight tape from that win.’ ... The games we lost, the AFC championship game in 2008, we kicked four field goals against the undefeated Patriots, got beat 21-12 and had a couple interceptions.”

He's only made it beyond wild-card weekend three times since then.

But Rivers never let the lingering questions define him or his career, taking pride in being a model of consistency.

His 4,000-yard streak is tied with Peyton Manning for third in NFL history. He's tied with Brady and Brees for the second-most 4,000-yard seasons in a career (12). Rivers has made 240 consecutive starts, 251 including the playoffs, the second-longest streak since the 1970 merger behind Brett Favre.

It's a legacy that commands respect.

“I think he’s a great leader, a great guy,” said defensive end Justin Houston, who faced Rivers 13 times before calling him a teammate.

“Meeting him on the field, he has a mouth on him so he definitely is going to talk his trash. I didn’t know how cool he was and how cool of a person — you actually love to be around him as a teammate, you love him. But I knew, going against him, he used to call out everything we did so his football smarts are second to none.”

And on Saturday, Rivers won't play it any differently.

“I think actually some of those games earlier in my career, you end up playing a little tight. I think that’s the one thing I’ve gotten a little bit better at," he said. “Play free, play focused, play all the same ways. I think that gives yourself the best chance to win."