Darnold's dismal day could have long-term impact for Jets 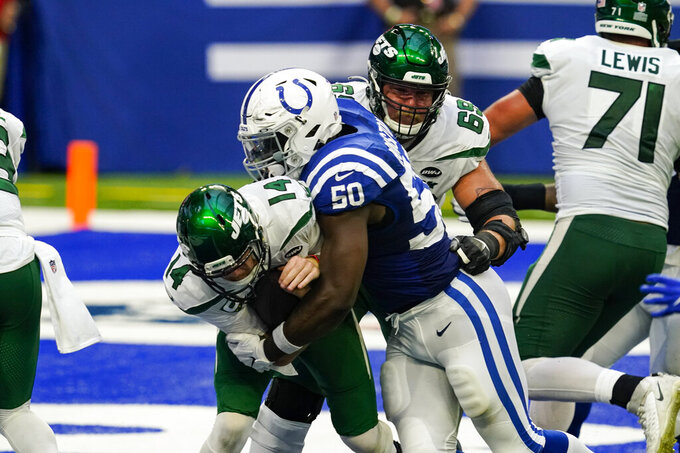 INDIANAPOLIS (AP) — Sam Darnold started dismally Sunday. His first official pass was picked off by Xavier Rhodes and returned 44 yards for a touchdown.

It went downhill from there — and might not get any better this week.

When the embarrassing 36-7 blowout at Indianapolis finally ended, the third-year quarterback had thrown three interceptions, two returned for touchdowns, and was taken down for a late safety as he produced an ugly quarterback rating of 53.2.

“I’m not playing consistent enough to play well in this league," Darnold said. “And so for me, I just need to, you know, play more consistent. Make the plays when they’re there. When they’re not, just get rid of the ball or check it down.”

Clearly, Darnold hasn't done that enough in his short career.

At Indy, though, he was at an obvious disadvantage with starting receivers Breshad Perriman and Jamison Crowder both inactive because of injuries and right tackle George Fant out, too. Then, during the first half, rookie left tackle Mekhi Becton departed with a shoulder injury and did not return.

So perhaps Darnold's numbers — 17 of 27 with 168 yards, one TD pass and two sacks and the three turnovers — shouldn't be all that surprising.

But the ramifications from another 0-3 start, New York's second straight, may linger well beyond Sunday.

The Jets have lost all three games by double digits and defensive players publicly complained this week about the intensity during practices.

And with the offense struggling mightily, too, there are now reports coach Adam Gase could be under fire. Gase has gone 7-12 with the Jets in a little more than one season, though expectations were high after New York posted the league's third-best record (6-2) over the second half of last season.

Instead, Jets fans have been watched more of the same, even as Gase looks for solutions.

“I’m going to do what I always do, come to work tomorrow and try to get things fixed," he said. “(Job security) is something I can’t worry about. I have to focus on getting our guys right.”

The Jets already have nine players on injured reserve and it's unclear how serious Becton's injury could be. Starting center Connor McGovern played through a hamstring injury and receiver Chris Hogan, the third starting receiver, also played despite a rib injury.

So despite starting the game with 19 consecutive plays, nearly 10 minutes of possession time and 188 total yards against NFL's No. 1 defense in the first half, New York finished with just 260 yards.

Those inside the locker room continue to support Darnold — and Gase.

“To the fans that are calling for his head, I never really understood that," said right guard Greg Van Roten, who played last season in Carolina. “I was on a team last year, we fired our coach (Ron Rivera), it’s not like we started winning games. You go further in the tank. So, I’m not really sure what that solves. But I get the frustration. I understand that. No one outside of our facility believes in us right now, and it’s just kind of how things are going.

"So we need to rally together as a team and start getting things on track.”

The Jets are allowing 31.3 points per game, in part because the franchise quarterback gave away 16 more on Sunday courtesy of three ill-advised plays.

But they haven't played well enough on either side of the ball to overcome so many mistakes. Gase knows it, and so does Darnold.