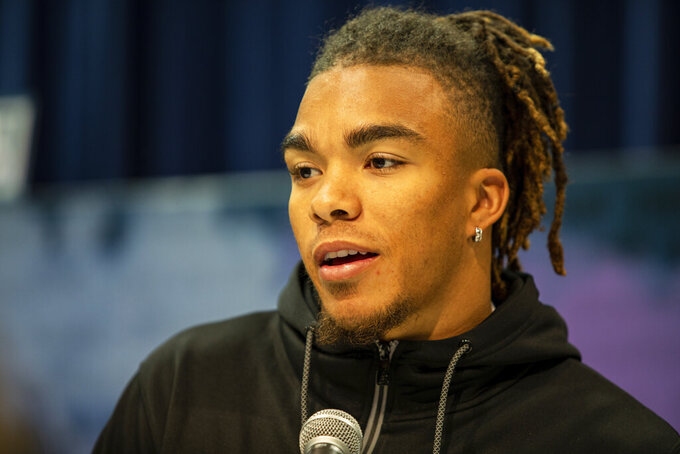 Chase Claypool talks to the media at the NFL Scouting Combine on Tuesday, Feb. 25, 2020 in Indianapolis. (Detroit Lions via AP)

PITTSBURGH (AP) — Chase Claypool had no idea he was on the Pittsburgh Steelers' radar. Funny, the thing that struck offensive coordinator Randy Fichtner the most when he met the wide receiver at the NFL combine is how you couldn't miss him.

“He has an air about him,” Fichtner said.

Size and speed too. So much that the Steelers selected the 6-foot-4, 238-pound Claypool in the second round of the draft on Friday night, hoping his arrival will give quarterback Ben Roethlisberger another red-zone target in his return from right-elbow surgery. Pittsburgh used its third-round pick to add depth at outside linebacker, grabbing Alex Highsmith from Charlotte.

Claypool caught 66 passes for 1,037 yards and 13 touchdowns last year for Notre Dame. He joins an offense in search of another playmaker following an eventful 2019 when the Steelers finished 8-8 after losing Roethlisberger to a for the season at halftime of Week 2.

“His production this past season was off the charts,” Fichtner said. "It’s been growing every season. He’s one of those guys that scores the ball. There’s ways to do it and he’s a guy that finds a way to score a touchdown in just about every game he plays.”

Roethlisberger is on schedule to play in 2020 and Claypool is the second big body to join the passing game in the last month. The Steelers signed tight end Eric Ebron to a two-year deal in free agency. Ebron can create mismatches on the inside. Claypool — who ran a 4.42 40-yard dash — can do the same on the outside.

Claypool, who is from Abbotsford, British Columbia, is the earliest Canadian selected in the draft since 2011 when Baylor offensive lineman Danny Watkins went in the first round (No. 23 overall) to Philadelphia and Orlando Franklin of Miami went to Denver in the second round (No. 46 overall).

The 21-year-old Claypool said he models himself after a handful of players, including Steelers wide receiver Juju Smith-Schuster. Smith-Schuster texted Claypool shortly after Pittsburgh selected him with the 49th overall pick and Roethlisberger made it a point to call the rookie.

The COVID-19 pandemic means Claypool has no idea how long he will have to wait to get to Pittsburgh. He's been working out with former NFL wide receiver TJ Houshmandzadeh and isn't concerned about the unusual “virtual” offseason program the league installed during the lockdown.

If anything, it just means he'll get more one-on-one instruction from Fichtner and first-year wide receivers coach Ike Hilliard.

Claypool dabbled with basketball growing up but always returned to football. A hype tape he put on Facebook helped him land a scholarship at Notre Dame and after a slow start he finished with a flourish. He caught 116 passes for 1,676 yards over his final two seasons, a breakout Claypool was confident would come.

“You could say I’m a late bloomer in the sense that I never really got my time to shine until my junior and senior year,” Claypool said. "I always thought I had the skill set. It just improved year after year.”

Still, Claypool admits he had “no clue” Pittsburgh was considering him until the phone rang on Friday night and coach Mike Tomlin was on the other end. There are worse ways to start your professional career.

“I think being on a team, a historic team with a proven background, especially for a quarterback like Ben, I think I was fortunate enough to be put in the right situation,” Claypool said.

Highsmith, a walk-on at Charlotte, was named a third-team All-American last fall after racking up 14 sacks while playing along the defensive line. He will move to outside linebacker in Pittsburgh, joining a group in need of depth after the team cut reserve Anthony Chickillo.

Highsmith will get the opportunity to learn behind one of the top edge combinations in the league. T.J. Watt is one of the best young pass rushers in the league and Bud Dupree broke out in his fifth season in 2019, playing well enough for the Steelers to place the franchise tag on him. Dupree signed the $15.6 million tender on the eve of the draft.

General manager Kevin Colbert reiterated the team will attempt to lock Dupree down to a long-term deal. Highsmith will get some time to adjust to playing upright after playing in a three-point stance at Charlotte but will be expected to be an immediate contributor on special teams. And there will be the occasional shot to get on the field on defense and get after it.

“We’ve got three Heisman Trophy winning quarterbacks in the (AFC) North,” Tomlin said. "And we need guys to hunt them down.”