High hopes for Falcons defense have been thoroughly dashed 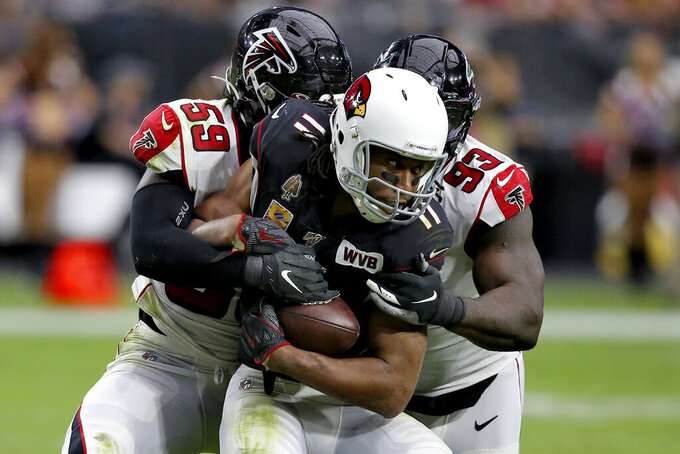 FLOWERY BRANCH, Ga. (AP) — The Atlanta Falcons had high hopes for their defense, with several key players were coming back from injuries and head coach Dan Quinn taking over as coordinator.

Those hopes were quickly dashed.

Six games into what is turning into a dismal season, the Falcons (1-5) have one of the NFL's worst defensive units in virtually every category.

The Falcons rank next-to-last in points allowed, surrendering an average of 31 per game. Only the hapless Miami Dolphins are lower at 36 a game.

No one is less successful when it comes to getting opposing offenses off the field. Atlanta is giving up a staggering 56% conversion rate on third down.

And on it goes:

"We ain't playing the best right now," linebacker De'Vondre Campbell said Thursday, sounding a bit testy. "The only people who can change it are us."

The Falcons had a top 10 defense in 2017, relying heavily on a young, aggressive unit to capture a wild-card spot and reach the divisional round of the playoffs.

The defense took a tumble last season, but that could be blamed in part on a devastating rash of injuries that took out three key players up the middle: linebacker Deion Jones and safeties Ricardo Allen and Keanu Neal.

Quinn decided to shake up his coaching staff by appointing three new coordinators — including himself to run the defense. It was a reprise of the role he held at Seattle, where he guided one of the top defenses in NFL history.

He hasn't come close to duplicating the success he had with the Seahawks.

While Neal went down with another season-ending blow in Week 3, the Falcons can't really blame injuries for their problems this season.

This is mostly self-inflicted.

The issues run the gamut, from a line that rarely makes things uncomfortable for opposing quarterbacks to a secondary that struggles to stay in the same area code with receivers to some truly baffling calls and formations.

The Falcons have only five sacks — tied with Miami for fewest in the league and a far cry from Carolina's NFL-leading 27. The two guys who are supposed to provide the bulk of the pressure from the outside, Vic Beasley and Takk McKinley, have combined for just two.

Beasley's performance is especially troubling. The No. 8 overall pick in 2015 out of Clemson, he was the NFL leader with 15.5 sacks in Year 2, an All-Pro who contributed mightily in Atlanta's run to the Super Bowl. In 36 games since then, he has managed just 11.5 sacks.

But Atlanta's problems can't be traced to one or two players.

This is a team effort.

The secondary has been burned over and over again by quick passes, often within a couple of seconds, before anyone could reasonably expect the pass rushers to make an impact.

"To be really good on defense, you need to have the whole thing going together," Quinn said. "It usually comes down to a combination of things,"

He called 17 blitzes last week against the Arizona Cardinals in hopes of getting more pressure, but it didn't have any impact. Rookie quarterback Kyler Murray wasn't sacked — shoot, he wasn't even hit. Not surprisingly, he carved up the Falcons for 340 yards and three touchdowns in a 34-33 victory.

"If you don't affect the quarterback, the game is really hard," Quinn said.

On Sunday, the Falcons face another stiff challenge when the reigning NFC champion Los Angeles Rams (3-3) visit Mercedes-Benz Stadium. While the Jared Goff-led offense has yet to show its full potential, this seems a good week for the Rams to break loose.

For Atlanta, it's a chance to finally start living up to those high hopes.

"The only thing we can do," Campbell said, "is get better."