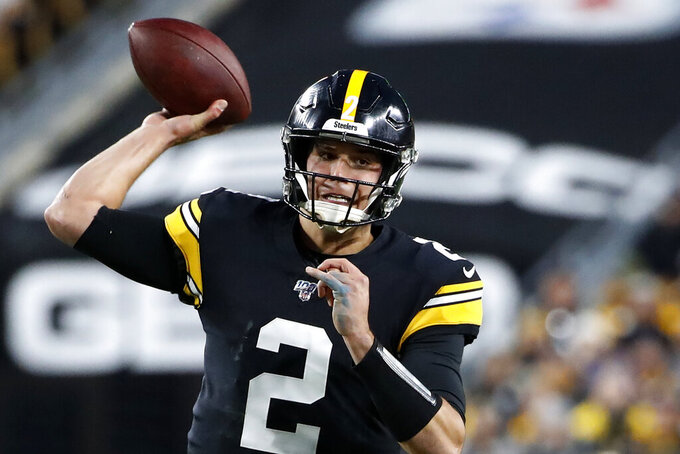 CLEVELAND (AP) — Separated by roughly 130 miles and six Super Bowl titles, the Pittsburgh Steelers and Cleveland Browns have a hostile, historic rivalry resuscitated from being heavily one-sided to much more competitive the past few years.

The hatred has never waned.

“It’s a big game. It’s Browns vs. Steelers,” said Cleveland running back and native Kareem Hunt, who is about to get his first on-field taste of the long-running football feud. “I’ve been watching this my whole life.”

The Steelers and Browns are getting together again Thursday night for the 135th time, renewing their deep disdain for each other in front of a national TV audience in what have been unexpected seasons for both teams.

The Steelers have salvaged theirs.

Cleveland has work to do.

“Everything’s at stake, man,” said Browns cornerback T.J. Carrie. “We have no more time to waste.”

Their margin for error expunged by a flurry of penalties, turnovers, questionable plays calls by rookie coach Freddie Kitchens in several disappointing early season losses, the Browns (3-6) will try to keep their faint playoff hopes flickering against the Steelers (5-4).

Pittsburgh, meanwhile, leaned on its championship pedigree to regroup after moving on from Le’Veon Bell and Antonio Brown and then losing quarterback Ben Roethlisberger in Week 2 to injury. Led by a ball-hawking defense, the Steelers have wiped out a 1-4 start.

“We are still scratching and clawing to make this thing happen and to keep winning games and keep stacking victories and let the chips fall where they may,” said second-year quarterback Mason Rudolph, who has settled in after replacing Big Ben. “We are not in the position where we can take anyone lightly.”

Talent and commercial endorsements haven’t been nearly enough in Cleveland. The NFL’s most publicized team in the preseason has failed to live up to expectations.

However, the Browns, who stopped a four-game skid with their first home win of the season Sunday over Buffalo, have a soft schedule ahead and haven’t given up on ending the league’s longest playoff drought going back to 2002.

Another loss would all but end their chances.

The key for Cleveland will be ball security. The Steelers are second in the league with 26 takeaways, the most for a Pittsburgh team through nine games since 1987.

“They are making a lot of plays right now,” said Browns quarterback Baker Mayfield, who hasn’t thrown a pick in two games after having a league-high 12 through seven.

During their winning streak, the Steelers have forced 14 turnovers, with safety Minkah Fitzpatrick returning two for touchdowns. Fitzpatrick came over in a trade from Miami and already has five interceptions and a fumble recovery in seven games.

Browns guard Joel Bitonio isn’t surprised by the Steelers’ surge. It’s who they are.

“I know a lot of people probably tried to write ‘em off at the beginning of the year when they lost all those guys and had the injury to Ben,” he said. “But they fight. ... They rallied around their defense and their culture and said, ‘Hey, we’re not giving up on this season.’ It’s really been impressive to see.”

Mayfield and Rudolph have history. They played each other three times in college, with Mayfield leading Oklahoma to a 3-0 mark against Rudolph’s Oklahoma State squad in a rivalry known as “Bedlam.”

In their last meeting, Mayfield passed for 598 yards and five touchdowns and Rudolph had 448 and five TDs in a 62-52 loss to the Sooners.

Rudolph isn’t looking for revenge or at the past.

“You want to win every game you can and do your rival games hurt more when you lose? For sure. You wouldn’t be human if you said otherwise,” Rudolph said. “We are trying to push the mud off us from the earlier September run we had.”

Now that Hunt is back from an eight-game suspension, the Browns are likely to pair him often in the backfield with Nick Chubb, who is closing in on 1,000 yards.

Both backs can run and catch, and Steelers coach Mike Tomlin knows his defense can’t focus on one or the other.

“They have big-time weapons,” he said. “Obviously, the two-back set is something that they did a week ago with a great deal of success. ... They are very multiple. That is one of the things that is challenging about them. Our hands are going to be full.”

Steelers running back James Conner is expected to play after missing two games with a sprained shoulder suffered against Miami on Oct. 28. Conner will wear larger shoulder pads for extra protection.

Pittsburgh’s running game has languished much of the season. The Steelers are 27th in yards rushing, 28th in yards per carry. Those numbers need to change if Pittsburgh wants to take pressure off Rudolph.

“Having James back will be big for us, especially with the confidence that he'll have coming into it,” tight end Vance McDonald said.

Conner lit up the Browns last season, piling up 404 yards of total offense and four touchdowns.

Steelers cornerback Joe Haden remembers his days with the Browns fondly even though they didn’t have a single winning season during his tenure.

“It's always going to be a little special because I spent seven years there,” said Haden, drafted by Cleveland with the No. 7 overall pick in 2010 and cut in 2017. “That's not going to go away. I just want to win a little more. I don't know if that's possible."

The 30-year-old has revived his career in Pittsburgh, signing a contract extension in August.