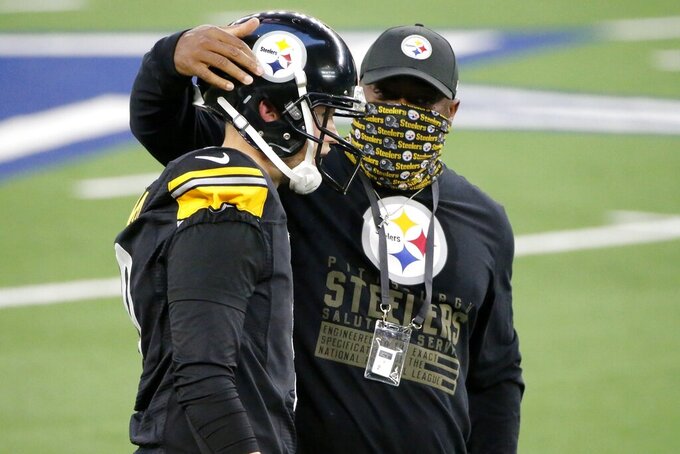 PITTSBURGH (AP) — The style points are lacking. The win total is not. The Pittsburgh Steelers are hardly complaining.

The NFL's last unbeaten team, the one that improved to 8-0 for the first time in franchise history following a closer-than-it-had-to-be 24-19 win over the Dallas Cowboys on Sunday, finds itself with the epitome of first-world problems in 2020: mildly expressing frustration even as the victories pile up.

“We can’t keep having these conversations every week because one of these weeks we’ll be doing it with an ‘L’ if we’re not careful,” head coach Mike Tomlin said.

Pittsburgh spent an inordinate amount of time chasing the injury-ravaged Cowboys. Just like it did the week before in Baltimore. Just like it did in Week 3 against Houston. Just like it did for a hot second in the season opener at the New York Giants. Each of the Steelers' last three games has come down to the final snap. A missed field goal in Tennessee. A pair of heaves to the end zone — one by reigning MVP Lamar Jackson, one by the well-traveled by largely anonymous Garrett Gilbert — both of which were broken up by Minkah Fitzpatrick

The Steelers aren't overwhelming opponents as much as they are outlasting them, very aware of the fine line they are walking. They are third in the NFL in point differential (plus-74), behind defending Super Bowl champion Kansas City (plus-103) and the two-loss Ravens (plus-84). Their run defense has shown signs of slippage each of the last two weeks. The offense has looked lifeless recently when quarterback Ben Roethlisberger isn't going no-huddle and working out of empty sets, in some ways making it up as he goes along. The special teams, which had been so solid through seven games, spent most of Sunday looking like a discombobulated mess.

And in the end, it didn't matter. They found a way, just as they've throughout the first half of the most unusual season in league history.

“I kid on the sideline, I feel like I’m too old for this stuff," the 38-year-old Roethlisberger said. "My body gets worn down.”

Maybe, but he isn't playing like it. A year removed from right elbow surgery, Roethlisberger is on pace to set a career high in touchdown passes and is largely avoiding mistakes. Three of his four picks came against the Titans, and his current interception rate (1.4 per 100 passes) would be a career low if he keeps it up.

“I think that so many times, the line and guys are looking at me on the sideline, ‘Ben, we believe in you,'” Roethlisberger said. "So I want to give everything I have. I wish we didn’t have to have fourth-quarter comebacks. I wish I’d played better early in the game. ... But as long as we win, we’ll take it.”

Despite walking into territory no other club in the franchise's 87-year history has tread, the Steelers are doing their best to keep their heads down. They're not lighting up scoreboards like the Chiefs. They don't have Baltimore's explosiveness. What they do have it the league's best record.

Yeah it's nice, but as defensive tackle Cam Heyward put it, all it's done is assure the team that it will finish .500 or better for the 17th straight year, a streak that happens to coincide with Roethlisberger's arrival.

Still, the Steelers have the inside track to the only AFC bye under the new playoffs format. While there's no talk of going 16-0, the schedule isn't overwhelmingly difficult. The Ravens visit on Thanksgiving night. There are trips to Cleveland and Buffalo in the final month. If the Steelers don't beat themselves, they believe nobody can beat them.

“We have a target on our back,” tight end Eric Ebron said. “We're undefeated.”

And for the first time since the franchise was established during the first year of Franklin Roosevelt's first term in the White House, no one else is.

Exactly how much leeway Roethlisberger has in calling plays when the team goes no-huddle is up for debate. The results are not. In each of the last two weeks Roethlisberger's freelancing has allowed the offense to snap out of a first-half funk to spark comebacks from double-digit deficits.

Perhaps no team in the NFL does as good a job at finding wide receivers outside the first round of the draft. Second-round pick Chase Claypool is the latest find, vaulting into the Offensive Rookie of the Year conversation by racking up seven touchdowns in eight games.

The special teams went from mistake free to mistake prone against the Cowboys. Chris Boswell missed two extra points and the team opted against a short field goal attempt late in the fourth quarter because Tomlin feared the dreaded “double-thud” ... coachspeak for a blocked kick.

“I am not about that life,” Tomlin said.

Inside linebacker Devin Bush and right tackle Zach Banner have been lost for the season. Pittsburgh is relatively healthy otherwise, though fullback Derek Watt has appeared in just four games mostly due to a balky hamstring.

Finding a way to get off to faster starts so each week doesn't come down to the last snap, starting on Sunday when Cincinnati (2-5-1) visits Heinz Field.