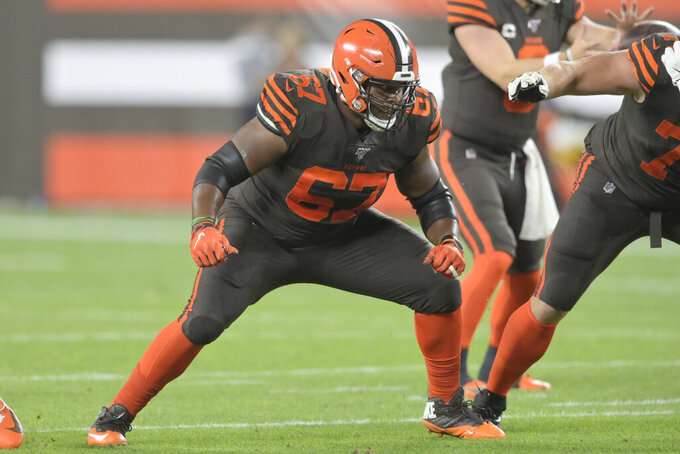 FILE - In this Sept. 22, 2019, file photo, Cleveland Browns guard Justin McCray (67) blocks during an NFL football game against the Los Angeles Rams in Cleveland. Browns starting left offensive tackle Greg Robinson has been benched. It’s likely that he will be replaced by Justin McCray, who has not started an NFL game at left tackle and has played their sparingly during his career. (AP Photo/David Richard, File)

CLEVELAND (AP) — The Browns have pushed big Greg Robinson to the bench.

Cleveland's left tackle said Friday that he's been demoted to a backup role after making 14 straight starts over the past two seasons. Robinson's insertion into the starting lineup midway through last season sparked a second-half surge by the Browns. Quarterback Baker Mayfield was only sacked five times in the final eight games.

Now, Robinson is being sacked.

"I'm not really satisfied with what's going on," the 6-foot-5, 330-pound Robinson said. "I'm just going to work my butt off until I'm back starting."

Browns coach Freddie Kitchens has been considering a shake-up to his line since the bye week and decided to make the switch before his struggling team visits the unbeaten New England Patriots (7-0) on Sunday.

Kitchens didn't reveal any changes in his lineup, but it's expected that Justin McCray will make his first career start at New England.

The 27-year-old McCray started 13 games over the last two seasons for the Green Bay Packers, mostly at guard. The Browns (2-4) acquired him in a trade on Aug. 31.

During Cleveland's bye week, general manager John Dorsey said Robinson needed to be "more consistent." Dorsey has also explored trading for Washington Redskins Pro Bowl tackle Trent Williams, who has not played this season due to a contract holdout.

That hasn't happened, so the quickest way to fix things was to drop Robinson, a former No. 2 overall pick by the Los Angeles Rams who was rewarded with a $7 million contract in February after bouncing back with the Browns.

"There's critical moments where I feel like I've hurt the team, and that's unacceptable on any level regardless," he said. "I won't say I wish I could have them back, but I do. I feel like I've basically owned up to my faults, the things that I can improve on. All I was just asked for was just to be more consistent and that's just my approach."

"They're still letting me know that they believe in me at this point, and going into the game I believe I will be a backup, listed as a backup," Robinson said. "But anything can happen, I just have to be ready and basically I can't be caught off-guard, whatever the case may be."