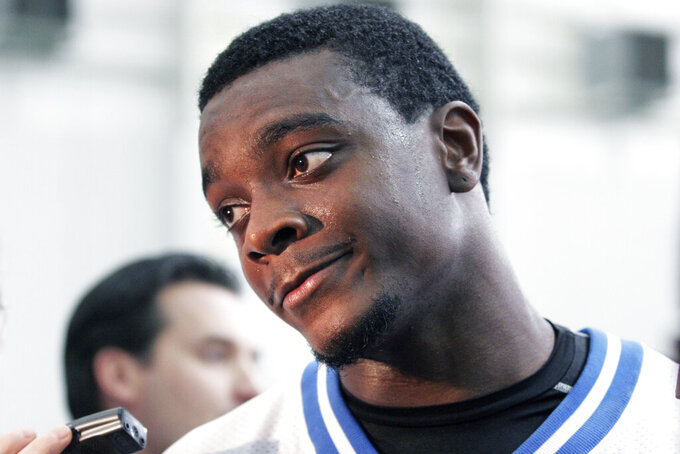 FILE - In this Nov. 2, 2005, file photo, Detroit Lions wide receiver Charles Rogers listens to a reporter's question after working out in Allen Park, Mich. Former Michigan State University star and Lions' Rogers has died. A woman who identified herself as Cathy Rogers, his mother, confirmed the death Monday, Nov. 11, 2019, in a phone call from The Associated Press. (AP Photo/Duane Burleson, File)

A woman who identified herself as Cathy Rogers, his mother, confirmed the death Monday in a phone call from The Associated Press. Other details were not immediately known. Marshall Thomas, Rogers' former basketball coach at Saginaw High School in Michigan, told MLive.com that Rogers died Monday of liver failure and also had cancer.

At Michigan State, Rogers was an All-American wide receiver who had 135 receptions for 2,821 yards in two seasons. He was college football's top receiver in 2002 and the second overall pick in the 2003 NFL draft. He scored twice in his NFL debut, but suffered a broken collarbone that ended his rookie season and suffered the same injury a year later. Rogers failed a drug test in 2005 and was cut entering the next season. He had 36 career receptions for 440 yards receiving and four touchdowns in 15 NFL games.

"We are deeply saddened to learn of the passing of Charles Rogers," the Lions said in a statement. "From Saginaw to East Lansing to Detroit, Charles' connection to the state of Michigan and its football community was felt by many during the course of his life. We extend our heartfelt sympathies and condolences to his friends and family during this difficult time."

"I was here as an assistant coach during Charles' first year on campus in 2000, and as a defense, we had to go against him in practice every day," Dantonio said in a statement.

"I have nothing but good memories of Charles," Williams told The AP in a telephone interview. "When he looked at you and smiled, you knew he was in a good place."

Rogers was arrested in 2008 in suburban Detroit and charged with assault and battery involving his fiancée. He pleaded no contest to trespassing and entered in a treatment house as part of his probation.

"May God hold Charles in the palms of His hands and give him eternal peace," Mannie said. "And may He give the family comfort and solace."