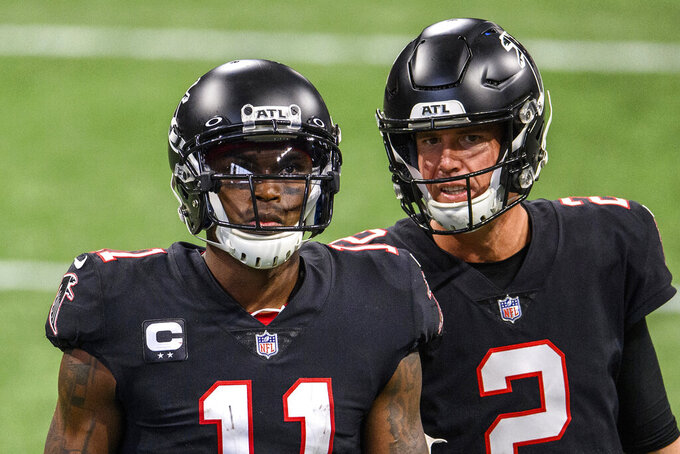 FILE - Atlanta Falcons quarterback Matt Ryan (2) speaks with wide receiver Julio Jones (11) during the second half of an NFL football game against the New Orleans Saints, in Atlanta, in this Sunday, Dec. 6, 2020, file photo. The Atlanta Falcons began their offseason training program Tuesday, May 25, 20921, without longtime star receiver Julio Jones, who apparently has no intention of returning to a rebuilding team that is still struggling to get under the salary cap. (AP Photo/Danny Karnik, FIle)

Now that the calendar has turned to June, NFL teams can trade or release players and spread the salary cap hit over two years instead of one.

That doesn’t mean Aaron Rodgers is going anywhere but the Packers couldn’t afford to deal him from a financial standpoint until now. Other star players such as Julio Jones and Zach Ertz are more likely to be moved.

With the salary cap expected to increase up to $208.2 million in 2022, teams have more flexibility to make blockbuster moves now that this important date has arrived.

Here’s a look at some players who could be traded or released:

The reigning NFL MVP has expressed his frustration with the Packers, but the team has insisted he’s staying in Green Bay. The Packers would have incurred a $38.4 million dead cap charge in 2021 by trading Rodgers before Tuesday. The Eagles took a record $33.8 million hit this year when they sent Carson Wentz to Indianapolis. By waiting to move Rodgers, the Packers would free up $22.85 million in salary cap space in 2021 and another $25.5 million for 2022 while clearing the contract off the books entirely for 2023.

Of course, the club hasn’t reached the point it wants to part with the three-time league MVP.

“We want him back in the worst way,” Packers coach Matt LaFleur said last month during the team’s rookie minicamp. “I know he knows that and we’ll continue to work at it each and every day.”

The seven-time Pro Bowl wide receiver said last week that he’s ready to leave Atlanta. The Falcons have salary cap issues and Jones counts $23 million against it for 2021. Trading him now can save Atlanta $15 million.

The 32-year-old Jones had 51 receptions for 771 yards and three touchdowns in nine games last season. He’s guaranteed $15.3 million this season but it’s possible a team looking to acquire him will restructure his deal.

The 30-year-old Ertz is coming off his worst season in which he caught just 36 passes for 335 yards and one TD in 11 games. He’s scheduled to earn $8.5 million this season.

The three-time Pro Bowl quarterback wanted out of Houston, but his future is uncertain after 22 women filed lawsuits alleging Watson sexually assaulted or harassed them. Houston police and the NFL are investigating the allegations.

The Texans would’ve incurred $21.6 million in dead cap money if they traded Watson before now. That number has been reduced to $5.4 million. Still, his off-field issues must be resolved first.

“I have nothing to say about Deshaun,” Texans coach David Culley said last week.

The seven-time Pro Bowl quarterback became the topic of trade speculation when he raised questions about whether Seattle was doing enough to put a winning product around him, but Seahawks coach Pete Carroll and general manager John Schneider squashed those rumors in April.

Seattle would’ve taken a $39 million cap hit by trading Wilson already. The amount has been reduced to $13 million.