McCaffrey races into NFL history in Panthers' down season 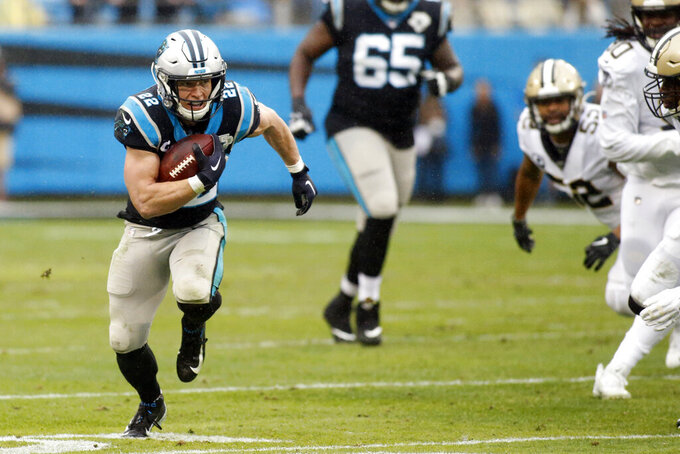 Carolina Panthers running back Christian McCaffrey (22) breaks a tackle during the second half of an NFL football game against the New Orleans Saints in Charlotte, N.C., Sunday, Dec. 29, 2019. McCaffrey broke a record on the play to become the third player in NFL history to tally 1000 rushing and 1000 receiving yards in the same season. (AP Photo/Brian Blanco)

CHARLOTTE, N.C. (AP) — Christian McCaffrey has made a habit of writing down goals before every season.

One of those was becoming the third player in NFL history to record 1,000 yards rushing and 1,000 yards receiving in the same season after coming up just short last year. McCaffrey reached that milestone on Sunday, joining Roger Craig and Marshall Faulk in that elite club.

“It's cool to accomplish one of the goals that you write down,” McCaffrey said. “But I can't reiterate this enough, the most important statistic is winning. And it's a shame when I look at guys like Luke Kuechly and Greg Olsen and they deserve better. There's a lot to learn from this season.”

But McCaffrey quickly turned the attention away from himself, saying he's more focused on rectifying the team's struggles. Carolina finished 5-11 after losing its final eight games, including a 42-10 drubbing by the Saints on Sunday, a prolonged stretch of miserable play that cost coach Ron Rivera his job with four games left.

“The individual statistics are great and they're cool and there will be stuff that you can look back on and be proud of yourself,” McCaffrey said. “But we would love to get this thing fixed and get it fixed quick.”

McCaffrey needed 67 yards receiving to reach 1,000 for the season.

He hit that number late in the third quarter, then capped that drive with his 19th touchdown of the season.

The Panthers waited until McCaffrey was on the sideline before making the official announcement to a half-empty stadium. Those still remaining stood to applaud him while his teammates lined up to hug him on the sideline.

With little else to play for, the Panthers had set out to get McCaffrey the record.

“It’s no surprise that he’s our offense,” interim coach Perry Fewell said. “We just ran our offense. We definitely wanted him to obtain that record, so yeah, that was a big focal point for us.”

Questions remain about whether the Panthers have overused McCaffrey, particularly over the last two seasons. He's received more touches than any player in the league during that span and he rarely leaves the field.

McCaffrey said his body "feels good," although he is looking forward to a little rest.

McCaffrey's frustration with the season was consistent with the mood in the locker room.

He called it a “whirlwind” with the Panthers losing former league MVP Cam Newton after two games, then rebounding to win five of the next six games under Kyle Allen to get to 5-3 before their winless second half of the year.

“It's not what we wanted,” McCaffrey said. “It's not what a lot of people wanted. But you win or you learn. Obviously, we lost a lot. There's two ways you can go about it. You can mope about it and cry about it and whine, but that does no good. Like I say every week, win or lose, you've got to treat the next Monday and Tuesday as reflections and get back to the drawing board and correct your mistakes and capitalize on what you did well and go on from there.”

McCaffrey said he is looking forward to taking on more of a leadership role in his fourth season.

“Definitely,” McCaffrey said. “We've got a lot of young guys, especially on the offensive side of the ball. The quicker we get those guys to realize that they're also leaders, the faster we can start moving forward with this thing. Because we have a lot of guys who have earned their stripes. The biggest thing with us is to set a high standard in this offseason and go from there."