Rushing champs headline next round between Colts, Titans 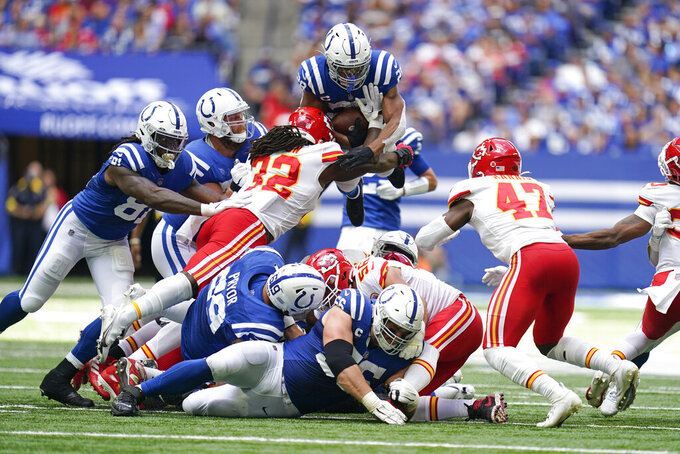 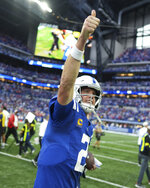 OPENING LINE: Colts by 3, according to FanDuel SportsBook.

AGAINST THE SPREAD: Tennessee 1-2; Indianapolis 1-2.

TURNOVER DIFFERENTIAL: Titans minus-3; Colts minus-3.

TITANS PLAYER TO WATCH: RB Derrick Henry. The 2019 and 2020 NFL rushing champ was on his way to a third straight title until he broke a bone in his right foot at Indy. He still finished ninth last season despite missing the rest of the season. Since returning from the injury, he's averaged 3.6 yards per carry and facing the Colts could be just what he needs to get a jump start.

COLTS PLAYER TO WATCH: RB Jonathan Taylor. Since dethroning Henry to win last year's rushing crown, Taylor has been among the league's top runners. Despite getting only nine carries against Jacksonville and being limited to 3.4 yards against Kansas City, Taylor is still No. 4 in the league with 286 yards. With Tennessee's run defense ranked among the league's worst, Taylor could shine Sunday.

KEY MATCHUP: Henry vs. Colts run defense. This always seems to be a favorite matchup. Henry's highlight reel is filled with clips from a rivalry in which he's logged 201 carries for 1,045 yards and six scores in 12 games, continually frustrating Indy. But Henry's struggles coupled with the Colts allowing just 77.0 yards rushing per game could swing this matchup toward Indy.

SERIES NOTES: Tennessee has won three straight and four of the past five in a series the Colts once dominated. ... Both franchises have relocated from their original cities. The Colts moved from Baltimore to Indy in 1984. The Titans moved from Houston to Nashville in 1997. .... These teams have only met once in the playoffs and Tennessee won the first playoff game ever played in Indy, 13-3.

STATS AND STUFF: Titans coach Mike Vrabel needs one more win to surpass Jack Pardee (44) for third on the team's career wins list. ... The Titans are chasing a franchise-record fourth straight win in the series. ... Tennessee is 10-2 against AFC South foes over the past two seasons. It's the NFL's second-best division record (Buffalo). ... The Titans have scored on the opening drive in all three games. ... Henry has TD runs in each of the past two games and needs three to tie Hall of Famer Earl Campbell (73) for second in franchise history. ... QB Ryan Tannehill is 4-1 against Indy since becoming the Titans starter. ... Tennessee's defense limited Las Vegas to 1 of 12 on third down conversions (8.3%), matching the franchise record set against Kansas City on Sept. 7, 2014. The Titans rank third in the NFL on third down conversion rate (22.9%). ... Last week, Titans S Kevin Byard had his 24th interception in his 100th game. He leads all safeties in that category since 2017. ... Titans P Ryan Stonehouse is the league's first rookie with two or more punts in a three-game span to average 55 yards per kick. ... Matt Ryan's final TD pass against Kansas City sent him past Eli Manning (8,119) for eighth on the NFL's career list for pass attempts. Ryan needs 15 more to surpass Philip Rivers (8,134) for No. 7. ... Taylor has topped the 100-yard mark 13 times in 36 games and needs one more to break a tie with Hall of Famer Marshall Faulk for fourth in Colts history. ... Taylor also needs one game with 100 yards and one TD run to pass Hall of Famer Eric Dickerson for second in franchise history. ... Colts r ookie Jelani Woods caught TD passes on each of his first two career receptions last week and is now tied for the second-most scores among NFL tight ends. ... The Colts have allowed 12 sacks in three games after giving up just 32 all of last season. ... Indy's defense has allowed the second-fewest 100-yard rushers (six) since 2018. Henry has done it four times against the Colts during those eight games. ... The Colts again rank among the league's best in converting turnovers into scores. They have 14 points off three takeaways.

FANTASY TIP: Neither team provided much help for fantasy owners in September. Perhaps October will be different. Henry's numbers against Indy are hard to ignore this weekend even though he's been out of sorts. And if Indy's offensive line can open some holes. Taylor could be headed for a big day. They are the surest bets in a game where there are no real safe options.