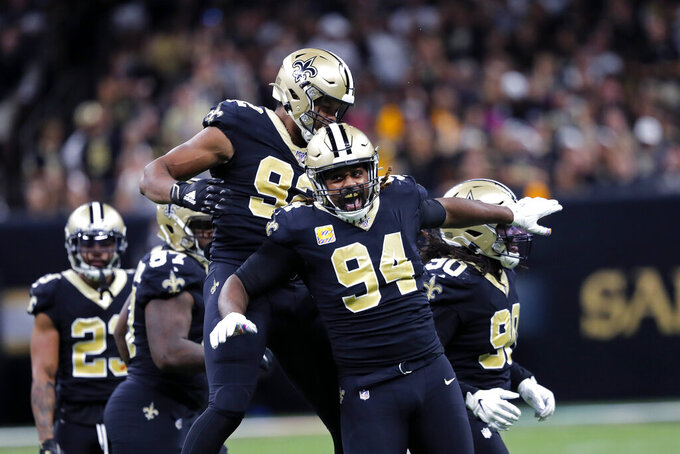 New Orleans' 31-24 triumph over Tampa Bay on Sunday illustrated why. For the second straight week, the Saints shut down an opponent that entered the Superdome on a roll.

"I'm glad I was on the Saints and not the Tampa Bay Bucs," Bridgewater said.

After holding Dallas to a season-low 257 yards while handing the Cowboys their first loss, 12-10, New Orleans limited the Buccaneers to a season-low 252 yards in a game that was not as close at the score indicated. The Bucs scored a touchdown with 13 seconds left after Saints coach Sean Payton elected not to try a 40-yard field goal on fourth down a little more than a minute earlier.

Tampa Bay was coming off a 55-point outburst against the Los Angeles Rams in which Jameis Winston threw for 385 yards and four touchdowns. This time, he managed 204 yards on 15 of 27 while being sacked six times.

"We affected the quarterback," Payton said. "We quickened the clock in (Winston's) head. We went into the game understanding the down-the-field throws were something that could get you beat, and we handled that element really well."

Other than a pair of 26-yard touchdown passes to Chris Godwin_one on the Bucs' last offensive snap_Winston's longest completion went for 16 yards. The Saints held receiver Mike Evans without a catch for only the second time in his six-year career.

Cornerback Marshon Lattimore, victimized for several big gains by Evans a year ago, had primary coverage responsibilities on him, but it was a complete defensive performance.

"We're as talented as anyone in the NFL," Jordan said. "I'm excited about what we can be if we keep growing."

After scoring three touchdowns on their first four possessions against the Rams, the Bucs punted away any opportunity to win in New Orleans_and punted, and punted and punted. They picked up one first down through their first three possessions and duplicated that during three series in the second half.

The Saints held Tampa Bay to 94 yards on 22 carries, extending their streak of not allowing a 100-yard rusher to 21 games.

"If you stop the run, you get more opportunities to rush the passer," said David Onyemata, who led the linemen with four tackles. "We take pride in stopping the run and rushing the passer and playing both sides. We just pay attention to detail, so we know what to expect."

The unexpected result was Bridgewater's performance. A game manager in his first two weeks as a starter, he went 26 of 34 for 314 yards as New Orleans (4-1) improved to 3-0 without Brees, who is expected to miss as many as three more games with a right thumb injury.

"With the weapons we have in the offensive room, we knew we could go out there and put up the numbers that we did yesterday," said tight end Jared Cook, who caught one of Bridgewater's four touchdown passes. "It was just (a matter of) going out there and doing it."

Almost everything. The Saints beat the Bucs across the board, outgaining them 457-252 and even rushing for 112 yards against the NFL's stingiest run defense. If Bridgewater continues to produce like that, the Saints will be tough to beat regardless of when Brees returns.

Rookie punt returner Deonte Harris, undrafted out of Assumption College , muffed a punt for the second time this season before recovering it. He appeared to fumble another one, but officials ruled there was no clear recovery discernable on video review and possession remained with the Saints.

Harris leads the league with 138 punt return yards, but needs to eliminate the mistakes.

"When you hit a little adversity, (you need) to not let the bad play affect plays later in the game, but that's part of the process," Payton said. "We're going to work our tails off and clean a lot of that up. He's a talented player and we'll continue to work on the technique."

Davenport, a first-round pick in 2018 who made only 21 tackles as a rookie, has 15 through five games. He had two sacks for the second time in his career, earning praise from Payton.

Receiver Tre'Quan Smith is struggling to stay healthy. He left with an ankle injury after missing the two previous games with the same ailment. He has five catches for the year with one touchdown after making 28 receptions with five touchdowns as a rookie.

In addition to Smith, Harris came up gimpy after his near fumble, but he did not miss any time.

3 — The defense has allowed three points while forcing four punts on opponents' opening possessions. Slow starts were a weak point last year, when New Orleans gave up eight touchdowns and a field goal on opening drives.

The Saints face Jacksonville and Chicago on the road in back-to-back games as they try to stay atop the NFC South.