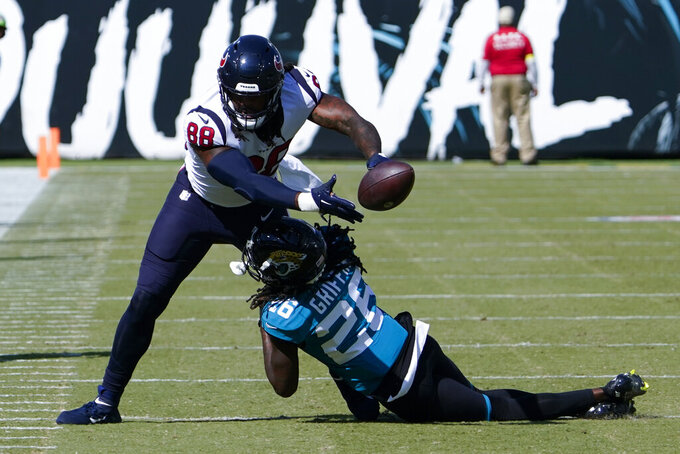 The AFC's only one-win teams had extra time to try to figure out why they are looking up at the rest of the conference in the standings despite being competitive almost every week.

“I actually got a really good feeling from watching the tape,” Raiders star receiver Davante Adams said. “Obviously, you look at the record and none of us are proud of that part. ... But you even look at some of the power rankings and the fact that they have us where they have us after having one victory at this point shows that there’s something that we’re doing out there that people are taking notice of and just not finishing to the best of our ability.”

The Texans (1-3-1) have a similar lament to the Raiders (1-4) heading into Sunday's meeting in Las Vegas as both teams have played four one-score games with Houston getting the only win out of those contests. The Texans beat Jacksonville 13-6 heading into the bye week.

Houston had previously blown a 17-point lead in the fourth quarter of a Week 1 tie against Indianapolis, blew another fourth-quarter lead in Week 2 in a loss at Denver, lost on a walk-off field goal by Chicago in Week 3 and was neck and neck with the Chargers in Week 4 until a late Los Angeles TD made it a 10-point loss.

“We’ve had our moments ... (but) I don’t like the way we’ve finished the games as much as anything,” Texans coach Lovie Smith said. “We had so many opportunities early on, but that’s a part of the growth too, to figure out how to finish a game.”

The Raiders have been in similar positions. They had late comeback attempts fall short in losses to the Chargers, Tennessee and Kansas City and blew a 20-point lead to Arizona in their other loss.

Their 0-4 record in one-score games comes a year after they thrived in those situations, going 7-2 to earn a surprising playoff berth.

“We didn’t win as many games as we thought we would at this point, that’s for sure,” quarterback Derek Carr said. “But it’s all within so many points. We know that we’re close, and again we’ve always said this — close doesn’t count, it doesn’t matter.”

The Texans love the performance of rookie running back Dameon Pierce so far and are looking for him to do even more as he gains more experience.

Pierce ranks eighth in the NFL and first among rookies with 412 yards rushing. The fourth-round pick from Florida ran for 99 yards and Houston’s only touchdown in the team’s win over the Jaguars in Week 5. He has broken 18 tackles in five games, which leads the NFL.

“After a quarter of football, we like where he is,” Smith said. “Much more to go, but I like the way he’s trending.”

The Raiders have gotten a big boost early this season from running back Josh Jacobs, who joined Marcus Allen and Bo Jackson as the only players in franchise history with back-to-back games with at least 140 yards rushing.

Jacobs is showing the explosion that he had early in his rookie season in 2019 but had been lacking the past two years as he fought off several nagging injuries.

“He’s running extremely violent, and not just the physicality, but his cuts are violent, his mentality is violent," Carr said. “You see it when he gets in the open field. We all know he can make people miss and stuff like that, but you’ve seen a couple of times in the last couple of weeks, him eye the safety out and say, ‘Okay, here I come.’ And he’s going to do it play after play after play.”

The matchup is a family affair for the McDaniels clan with Josh McDaniels in his first year as coach of the Raiders and younger brother, Ben, in his second year on Houston's staff where he is currently wide receivers coach and passing game coordinator.

This is the third time the brothers have squared off in the NFL with Josh winning matchups in 2013 between New England and Tampa Bay and in 2021 between the Patriots and Texans.

“These are always interesting,” Josh McDaniels said. “I’ve got a lot of respect and admiration for my brother and the job he does. He’s a very good coach, and these are fun things to look back on years from now talking about, you know, when we’ve played each other and coached against one another. I’ve tried to recruit my mom and dad to silver and black for sure this week, which I think I’m winning that war right now.”

The Raiders are dealing with a big loss on defense after cornerback Nate Hobbs went on injured reserve this week with a broken hand. Hobbs has been Las Vegas' best player in the secondary with the ability to play in the slot and outside. Anthony Averett, who broke his hand in the opener, could return this week and provide some help.