2 of a kind: Chubb, Hunt give Browns powerful backfield 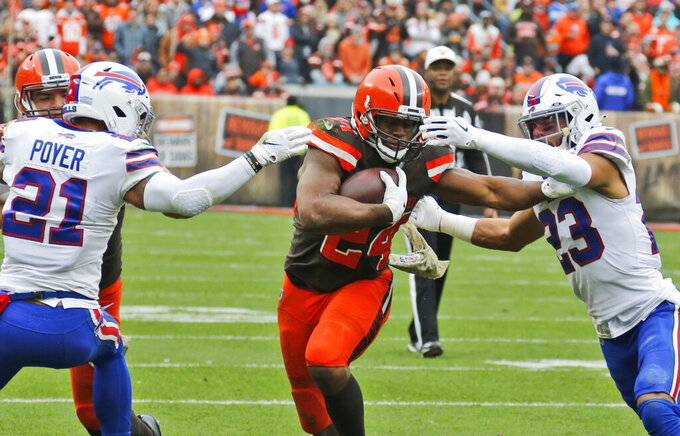 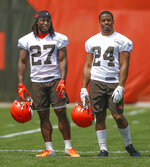 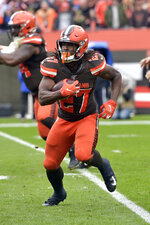 That's not necessarily a bad problem.

With Kareem Hunt returning from his eight-game NFL suspension to join Nick Chubb in Cleveland's backfield, the Browns (3-6) have a dynamic duo that will test opposing defenses on the ground and through the air.

In Sunday's 19-16 win over Buffalo, the Hunt-Chubb tandem debuted and combined for 196 total yards while helping the Browns snap a four-game losing streak that halted this season shaped by high expectations from dissolving into another maddening mess.

Kitchens, whose future was beginning to look bleak and remains unclear, understands that Chubb-Hunt can be a potent 1-2 combination.

"Anytime you can get guys who can do things with the ball in their hands and they can also play off of other people, that definitely impacts decisions, alignments and assignments," Kitchens said Tuesday as the Browns prepared for Thursday night's game against the surging Pittsburgh Steelers (5-4) "When you have more than a couple of options, it's always, from that positon in particular, very good."

To this point, the Browns have lacked a clear offensive identity.

The two-back, Chubb-Hunt set may change that.

Quarterback Baker Mayfield hasn't developed any consistent chemistry with Pro Bowl receiver Odell Beckham Jr., who has just one touchdown catch as teams have focused on taking him away with double teams. The Browns went out of their way to get Beckham involved on Sunday as he was targeted 12 times — Mayfield just missed him on two long throws — and had five catches.

Jarvis Landry had one of his best games this season with nine receptions for 97 yards and a touchdown.

The Browns have already seen how Hunt's versatility will prevent teams from keying on Chubb, who is on the verge of a 1,000-yard season, while creating more downfield opportunities for Beckham and Landry.

"We kind of did some experiments on just how much we can do with that package," Mayfield said. "Obviously, two dynamic players with Nick and Kareem, we are able to do a lot but kind of make to where we format it where it all looks similar, but we are doing different things out of it. It can be an explosive package for us. We just have to go out there and do our job."

From the start on Sunday, Hunt did his job, unleashing months of pent-up energy.

On Cleveland's second play, he lined up alongside Chubb and then delivered a kick-out block that cleared a path for his teammate on a 21-yard run. It was a tone-setter and perhaps a sign of things to come.

"They're both willing blockers, they both can catch out of the backfield, then can line up in different spots and they both run with great energy," said left guard Joel Bitonio. "It was cool to see 'em both out there. Hunt ran the ball hard the few times he got it. The cool thing was he was lead-blocking a few times and some of those were big spring plays. You know we don't have a fullback in there, but he kind of acted like it a couple times.

"That was really cool to see, his willingness to be that guy."

Hunt's debut for the Browns was a revelation in many ways.

The 24-year-old former NFL rushing champion is determined to change his personal narrative following two ugly, off-field incidents that led to his release by the Kansas City Chiefs last year and subsequent league punishment. To some, the disturbing video of Hunt shoving and kicking a woman during an argument last year has painted him as an unforgivable villain.

However, the Browns have been impressed with his attitude and maturity. He's made strides off the field. On it, he's a potentially game-changing player.

"Whatever the team needs, he'll do," said center JC Tretter. "He showed it."

Hunt understands there may be people not thrilled that he's getting a second chance. That's something else he has avoided focusing on.

"I really do not pay too much attention with that," he said when asked if he senses how fans have received his return. "It is up to you. If you like me, you like me."

NOTES: DE Olivier Vernon (knee) and S Eric Murray (knee) remain sidelined and will likely miss Thursday's game. ... The season's first significant snowfall forced the Browns to practice indoors. But kicker Austin Seibert, punter Jamie Gillan and long snapper Charley Hughlett went outside to get their work in. ... Mayfield will match up Thursday against Steelers QB Mason Rudolph for the first time as pros. They faced each other three times in college with Mayfield leading Oklahoma to a 3-0 record against Rudolph and Oklahoma State. "Mason is a great guy," Mayfield said. "He is playing well, taking care of the ball, putting them in a good position to win."