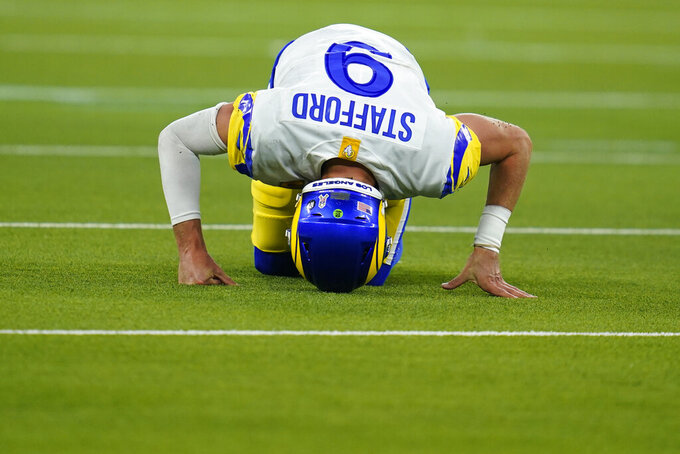 TURNOVER DIFFERENTIAL: Rams plus-5; 49ers minus-9.

RAMS PLAYER TO WATCH: WR Cooper Kupp leads the NFL with 74 catches, 1,019 yards receiving and 10 TD catches to join Jerry Rice as the only players in the Super Bowl era with at least 1,000 yards receiving and 10 TD catches in his team's first nine games. Kupp's streak of 13 straight games of at least five catches is the longest active one on the NFL.

49ERS PLAYER TO WATCH: QB Jimmy Garoppolo is coming off his first back-to-back 300-yard passing games since 2017. Garoppolo threw for 648 yards in those games and had a passer rating of at least 100 in both. The only Niners quarterbacks ever with three straight games with at least 300 yards and a 100 rating are Hall of Famers Steve Young and Joe Montana.

KEY MATCHUP: Rams DL vs. 49ers OL. Von Miller could make his debut for the Rams to join Aaron Donald and Leonard Floyd on a fearsome defensive line. Even if Miller can't go, the Niners will have their hands full, especially with RT Mike McGlinchey is out for the season with a torn quadriceps. RG Daniel Brunskill has struggled in pass protection and could have to deal with Donald on the inside.

SERIES NOTES: The 49ers have won four straight in the series, their longest in the series since a five-gamer in 2008-10. ... San Francisco is 5-3 since Kyle Shanahan took over Niners and Sean McVay was hired as coach of the Rams in 2017. ... Garoppolo has won all four career starts against the Rams despite throwing five INTs. ... Donald's 12 1/2 sacks are tied with Kevin Greene for the most ever against the 49ers.

STATS AND STUFF: Los Angeles is 4-0 on the road. ... Rams QB Matthew Stafford is the only quarterback with nine games with at least 250 yards passing this season. ... Los Angeles RB Darrell Henderson has gained at least 50 yards from scrimmage in eight games this season. ... Donald needs two sacks to become the fourth player since 1982 with at least eight sacks in each of his first eight seasons. ... The Rams lead the NFL with 28 sacks. ... The 49ers have lost their first four home games of the season for the first time since 1982 and third time ever. ...San Francisco is 1-8 at Levi's Stadium the past two seasons with the only win coming Oct. 18, 2020. ... The Niners' minus-9 turnover differential is tied for second worst in the NFL. ... San Francisco's 39 yards rushing last week were the second fewest of the Shanahan era and the 11 rush attempts were the fewest in a game since 2009. ... San Francisco TE George Kittle had six catches for 101 yards and a TD last week. ... WR Deebo Samuel's 882 yards receiving are the most for the 49ers through eight games and stand second in the NFL.

FANTASY TIP: After being an afterthought early in the year, Niners WR Brandon Aiyuk has taken on a bigger role the past two weeks after regaining Shanahan's trust. Aiyuk had six catches for 89 yards and a TD last week.