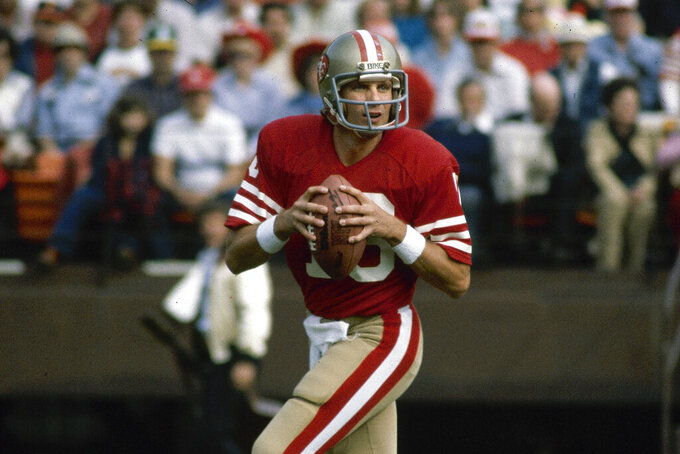 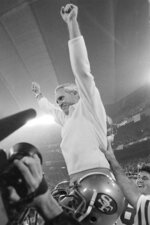 SANTA CLARA, Calif. (AP) — A first-time NFL coach turning a losing franchise into a contender in his third year and getting the label of an offensive genius.

A charismatic quarterback in his third season in San Francisco emerging as a leader and a face of the franchise.

A talented defensive rookie who transformed a defense from a struggling one into a dominant unit.

What coach Kyle Shanahan, quarterback Jimmy Garoppolo, defensive end Nick Bosa and the rest of the San Francisco 49ers are doing this year harkens back to 1981 when Bill Walsh, Joe Montana and Ronnie Lott led the franchise to its first Super Bowl title.

"No one expected us to be where we wound up in terms of the playoffs," longtime 49ers executive Carmen Policy said about the 1981 team. "The truth of the matter is no one expected these 49ers to be in the playoffs, either. They were hoping for a good solid year and maybe just maybe, depending on what happened in the NFC West, then sneak into a wild-card spot.

"Absolutely no one would have been able to credibly predict that we would be able to be the No. 1 seed this year. I feel that the harmony that existed in the 1981 season in the front office, on the field and in the locker room is the same as this iteration."

Both versions of Super Bowl-bound 49ers teams got there after long stretches of losing. They are two of the three Super Bowl teams to make it that far after losing double-digit games for three straight seasons.

Walsh and Shanahan both took over two-win teams that had been on a coaching carousel and lacked any stability. The first steps were installing the innovative offenses both coaches became known for and instilling a selfless ethos in the locker room.

Then came the quarterbacks, with Walsh picking Montana in the third round of his first draft and Shanahan acquiring Garoppolo midway through his first season for a second-round pick.

The two quarterbacks each started only eight games those first two seasons. Montana needed time to supplant Steve DeBerg, and Garoppolo was sidelined three games into his second year by a season-ending knee injury.

But each showed enough to provide at least a little hope heading into the third year of the new regime.

"I think '81, didn't exactly sneak up on us," Policy said. "Once Joe started in 1980, that was a little spark there toward the end of that season. Bill was actually thinking of quitting after the first year. That's how bad it got. During the beginning of the second year he was having some problems, like, 'Whoa, what's going on here? Do I have this in me?' But then Joe took over at the quarterback position and there was a little bit of a spark. Then we had the draft."

The Niners upgraded their defense when they drafted Lott eighth overall. As a rookie, he had seven interceptions, with three returned for touchdowns.

That's the kind of impact Bosa made on this year's version as the No. 2 overall pick, recording nine sacks and turning the unit into a fearsome one.

Then the victories started mounting. The 1981 team won seven in a row following a 1-2 start and this year's version started the season 8-0.

Shanahan has likened a win in October at the defending NFC champion Los Angeles Rams as having the same kind of impact that the victories over Dallas and Pittsburgh had 38 years ago.

For Policy and then-owner Eddie DeBartolo, who grew up in Youngstown, Ohio, it was winning 17-14 against the Steelers, who had won four of the previous seven Super Bowls that really signaled the Niners had arrived.

"You came from that part of the country, you didn't even think of beating the Steelers in Pittsburgh," Policy said. "All of a sudden the San Francisco 49ers beat the Steelers in Pittsburgh and we beat them at their own game. We were physical, we were ready. We started looking at each other and we were almost afraid to say it out loud, but it was kind of like we can go further than we ever dreamed this year. You know the rest of the story."

The 1981 Niners lost only one more time the rest of the season, beating the Cowboys again in the NFC title game thanks to the most famous play in franchise history, The Catch, and then finishing it off with a Super Bowl win over Cincinnati.

This year's version will need to do the same against the Kansas City Chiefs to make the comparison work — to be the last team standing.

“That's when you feel really special,” Lott said. "Even right now the 49ers know this isn't a special year unless they win."