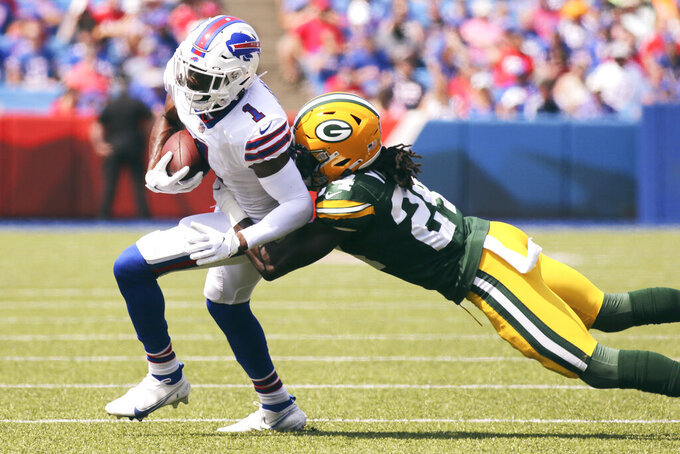 ORCHARD PARK, N.Y. (AP) — After most of his teammates had long retreated to the locker room, Bills receiver Stefon Diggs lingered at midfield, hands on hips, watching a mob of people surrounding members of the newly crowned AFC champion Kansas City Chiefs celebrating in the end zone.

Buffalo’s breakthrough season had come to an abrupt end with a 38-24 loss to the Chiefs in January, yet Diggs wanted to take in one last glimpse in a moment captured by photographers.

“There’s definitely an image in my head. I was there. I don’t need too much of a picture to relive it," Diggs said, as to whether he has a copy of the photo upon opening training camp in July.

"But it’s definitely something that’s extremely motivating,” he added, before looking to the future. ”(The Chiefs) have a great team. I look forward to seeing them again.”

Diggs’ comments are a reflection of the sky-high expectations which remain in Buffalo, and of a team confident in it’s potential of taking a step — maybe two — farther.

“We went from a team that was huge underdogs to people got a target on your back, and that’s just how it works when you win games,” Diggs said. “So as far as us, you welcome the struggle, you welcome the challenge and you look forward to it.”

There’s much to look forward to from a roster mostly unchanged from the one which led to Buffalo winning its first AFC East title since 1995 and making its deepest playoff run in 27 years.

The Josh Allen-led offense returns 10 starters from last year, when the unit set numerous single-season passing and scoring records, with Diggs becoming Buffalo's first player to lead the NFL in yards receiving and catches. The only change is the addition of receiver Emmanuel Sanders, who fills the vacancy left by John Brown’s departure.

The defense also returns 10 starters with the only “new” addition being defensive tackle Star Lotulelei, who returns after opting out last year for COVID-19 concerns.

Lotulelei’s hulking presence in the middle should shore up issues Buffalo had in stopping the run last year. Another difference is the commitment the Bills placed on upgrading their inconsistent pass rush by using their first two draft picks to select defensive ends Greg Rousseau and Carlos Basham, and signing Efe Obada in free agency.

“If getting noticed was the goal, then maybe we accomplished that. But if winning and the goals that we had set up was it, we know we didn’t accomplish that last year,” McDermott said. “This is a new season.”

Allen’s teammates, last month, noticed a few differences in the quarterback in the days after he signed a six-year, $258 million contract extension that locks him up through 2028.

The Bills are counting on having fewer COVID-19 practice restrictions and a three-game preseason schedule to get their pedestrian running attack better prepared for this year. Buffalo finished 20th in the NFL with 1,723 yards rushing — the team’s fewest since 2014 — behind the tandem of Devin Singletary and Zack Moss.

The debate over player vaccination was an offseason-long topic in Buffalo, with receiver Cole Beasley threatening to retire in June because of restrictive league protocols. He didn't retire, but concerns over Beasley's availability were raised last month when he was one of four players forced into five days of self-isolation for having close contact with a vaccinated team trainer who tested positive for COVID-19.

Beasley and fellow receiver Isaiah McKenzie were also fined by the NFL for not wearing masks inside the team facility. McKenzie has since announced he has received his first or two vaccination shots.

GM Brandon Beane expects the Bills to have all players available for the season opener against Pittsburgh on Sept. 12. Diggs did not appear in a preseason game and missed two weeks with a knee injury. Defensive tackle Harrison Phillips is expected to be ready after hurting his knee against Detroit on Aug. 13.

The Bills face a familiar tough stretch in their schedule come October, when they travel to face Kansas City and Tennessee on consecutive weeks. Last year, Buffalo dropped to 4-2 after losing back-to-back outings at Tennessee and at home to Kansas City in mid-October.

Buffalo also faces a familiar foe in Tom Brady, when the team travels to play the defending Super Bowl champions at Tampa Bay on Dec. 12. Brady set an NFL record for most wins against a single opponent during his 20 seasons with New England by going 32-3 against Buffalo.