After landing Hill, the draft may be uneventful for Dolphins 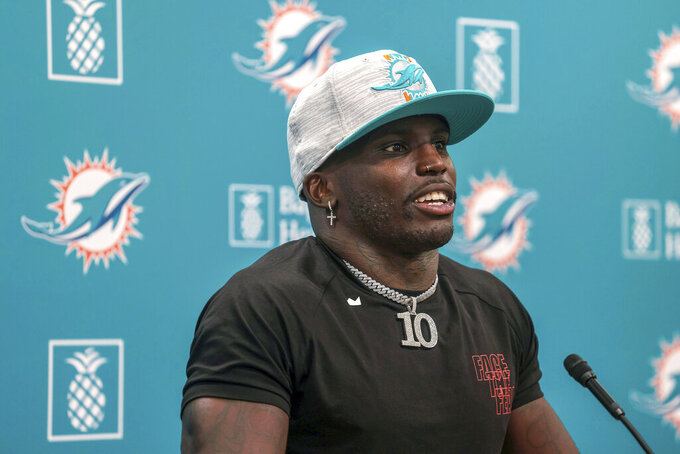 While most other general managers will spend the early rounds of the draft fretting over who to take and who might be available, Dolphins general manager Chris Grier can relax. The Dolphins don’t have a first- or second-round pick in this year’s draft because of the blockbuster trade that brought wide receiver Tyreek Hill from Kansas City to Miami, and that move alone already has Grier believing this draft was a success.

“We were trying to figure out what we were going to do on draft day,” Grier said. “And one of the guys said we’ll just watch Tyreek highlights in the draft room to make us feel good.”

By the time the Dolphins will be on the clock, they might be able to get through a whole lot of Hill highlights. Barring a trade — something Grier hasn’t ruled out, though indicated such a move would be unlikely — Miami’s first pick this year will be the 102nd of the draft. If it happens that way, this year would be the first in Dolphins history in which they didn’t make a pick in the top 100.

Every other team, except one, is scheduled to have at least one draft selection before No. 102 rolls around. The exception: the Super Bowl champion Los Angeles Rams, who, for now, aren’t expected to make a pick until No. 104.

But the Dolphins will be ready if things change, Grier said. Having only four picks doesn’t mean Miami could evaluate any differently.

“We haven’t changed our process because I think you end up shortchanging the organization if you do that,” Grier said. “Because at the end of the day, you never know when opportunities arise to do something, whether you make a move or not.”

It has been an offseason of change and, in some cases, tumult for Miami.

Brian Flores was fired as coach, then sued the organization and the NFL alleging racial discrimination among other things. Mike McDaniel was hired as coach, and his player-friendly approach is already paying dividends. The Dolphins landed left tackle Terron Armstead, wide receiver Cedrick Wilson and quarterback Teddy Bridgewater as part of a massive haul of free agents, plus kept defensive end Emmanuel Ogbah and tight end Mike Gesicki.

Also notable: the fact that quarterback Tua Tagovailoa is still the Miami starter, after he and the Dolphins were dogged by the team’s acknowledged interest in the embattled Deshaun Watson — who wound up going to Cleveland from Houston.

Months later, Tagovailoa didn’t have much to say about Flores’ dismissal.

“I’ll tell you this,” Tagovailoa said. “I’m very thankful that he drafted me to come here to play for the Miami Dolphins. That’s what I’d say.”

It’s now up to Grier to find four more players who will be thankful to be Dolphins.

Miami doesn’t have a first-round pick for the 10th time in franchise history and the first since 2003. The Dolphins didn’t have a first-rounder that year (or 2002) because of a trade for running back Ricky Williams. Entering the draft, barring trades, the Dolphins are among eight teams without a pick in Round 1. The others: Chicago, Denver, Cleveland, Indianapolis, Las Vegas, San Francisco and the Rams.

Past 102nd picks in the draft have included quarterback Kirk Cousins (2012), running back Stephen Davis (1996) — and a couple of Hall of Famers, including one with deep ties to Miami. Linebacker Nick Buoniconti went at No. 102 in 1962, playing his first seven seasons with the Boston Patriots before playing his last seven with the Dolphins. And quarterback Johnny Unitas also went 102nd, by Pittsburgh in 1955, though he never played for the Steelers.

The Dolphins took three players from colleges in Florida in the 2013 draft — all from the Florida Gators, with linebacker Jelani Jenkins at No. 104, running back Mike Gillislee at No. 164 and kicker Caleb Sturgis at No. 166. The team hadn’t taken a player from a Sunshine State school again until last year, when it grabbed linebacker Jaelan Phillips out of Miami at No. 18.