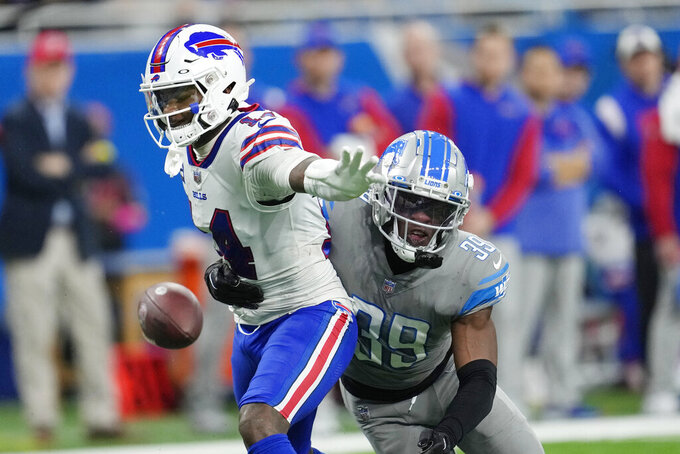 TURNOVER DIFFERENTIAL: Bills plus-1; Patriots plus-1

BILLS PLAYER TO WATCH: QB Josh Allen. In his past three starts at New England, he has nine touchdown passes with no interceptions for a 115.3 passer rating. Allen is also second in the NFL with 3,744 combined yards this season and ranks third with 28 total TDs.

PATRIOTS PLAYER TO WATCH: LB Matt Judon. He leads the league with a career-high 13 sacks. He has 10 sacks in five home games this season and has a sack in two of his past three meetings against Buffalo.

KEY MATCHUP: Allen vs. Patriots pass rush. Allen used both his arm and legs to hurt the Patriots in Buffalo’s two most recent wins. He had three passing TDs and rushed for 64 yards in the second regular-season meeting last season. He followed that up with five passing TDs and 66 rushing yards in the playoff victory. Preventing Allen from getting outside the pocket and extending plays will be the top priority for the Patriots defense.

KEY INJURIES: The Bills will be without top pass rusher Von Miller, who has been ruled out with the knee injury from Buffalo’s 28-25 win over the Detroit Lions on Thanksgiving. LT Dion Dawkins (ankle) sat out the first two practices of the week. ... The availability of Patriots RB Damien Harris (thigh) and OL Isaiah Wynn (foot) are up in the air after they missed practices Monday and Tuesday. Wynn was inactive last week.

SERIES NOTES: The Bills have won three of the past four regular-season meetings. ... The road team has won each of the past three regular-season meetings. ... The teams split last year’s regular-season series, with the Patriots winning in Buffalo 14-10 in Week 13, and Buffalo winning in New England 33-21 in Week 16. The teams met again in the wild-card round of last year’s playoffs, with the Bills defeating the Patriots in Buffalo 47-17. It marked the second postseason meeting between the two clubs. Allen set career highs in touchdown passes (five) and passer rating (157.6) in the victory. ... The Patriots won 15 straight games against the Bills from 2003 through 2010, tied for the fourth-longest winning streak over a single opponent in NFL history.

STATS AND STUFF: The Bills enter the game in second place in the AFC East behind Miami (8-3), which holds the head-to-head tiebreaker over Buffalo. The Bills are 0-2 against division rivals with losses at Miami and to the New York Jets. ... Buffalo has won at least eight of its first 11 games of a season for the 14th time in franchise history, and third time in four years. ... Since 2020, Buffalo has scored an average of 30.4 points per game against New England, while holding the Patriots to 16.4 ppg. ... Buffalo’s three losses have been decided by a combined eight points. ... WR Stefon Diggs is looking for his third game in a row with a TD catch. Diggs has four TD catches in his past three games against New England. ... Buffalo ranks second in the NFL with 13 interceptions, led by safety Jordan Poyer, who is tied for the AFC lead with four INTs. Last week, Poyer led the team with a season-high 10 tackles. ... LB Matt Milano has at least one tackle for a loss in each of his past five games and leads the team with 11 TFL this season, his second straight year with at least 10 in the category. ... DT Ed Oliver had two TFL, a sack and his first forced fumble and fumble recovery of the season on Thanksgiving. He aims for his third in a row with multiple TFL. ... New England’s 77 wins over the Bills are the most by the Patriots against any other opponent. ... Bill Belichick has a 101-38 (.727) all time regular-season record against the AFC East as coach of the Patriots. ... New England ranks second in the NFL with 37 sacks. ... QB Mac Jones is coming off a career-high 382 passing yards and season-high marks in completions (28), TD passes (two) and passer rating (119.8). He is looking for his third consecutive start with a rating of 100-plus. ... RB Rhamondre Stevenson led the team with 112 scrimmage yards last week. ... Harris rushed for 103 yards and a career-high three TDs in the previous regular-season meeting. In each of his three games against Buffalo, Harris has totaled at least 100 rushing yards and a rushing TD. ... LB Josh Uche has a sack in three of his past four games. ... DB Jonathan Jones has a team-leading three INTs.

FANTASY TIP: Allen has shined in Thursday games with a 4-0 record and 108.1 passer rating (73.6 percent completion rate, 10 passing TDs, three rushing TDs). In those games the Bills have an average margin of victory of 19 points.