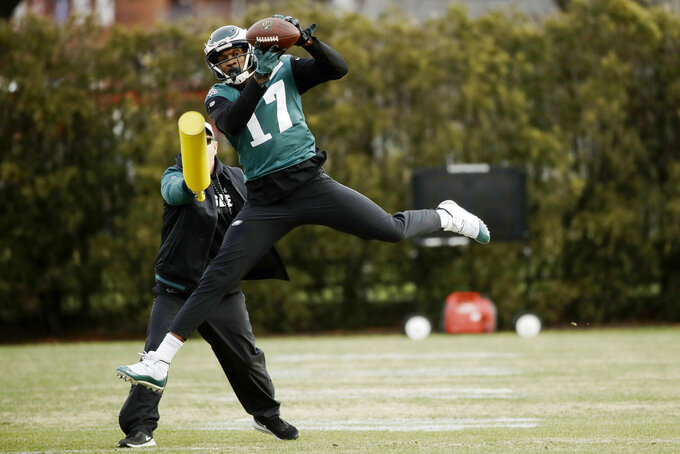 PHILADELPHIA (AP) — Alshon Jeffery is all business this week.

The talented wide receiver is playing in Chicago for the first time since he left the Bears after five seasons and joined the Philadelphia Eagles. He's not feeling sentimental. The Eagles (9-7) have a tough road trying to defend their Super Bowl title, starting with a wild-card game against the Bears (12-4) on Sunday.

"I don't have any emotions. I don't have any feelings, honestly," Jeffery said. "It's a playoff game and they're just in the way of where we want to go. I can't wait for this game, for sure. That's all I got to say. We're playing the Bears, but if we were playing anybody else I still couldn't wait to play this game. I'm excited to be in the playoffs."

Jeffery established himself as one of the NFL's top receivers during his time in Chicago. He went to the Pro Bowl after the 2013 season when he caught 89 passes for 1,421 yards and seven touchdowns. He followed with 85 receptions for 1,133 yards and 10 TDs in 2014. Jeffery missed 11 games over the next two years and his numbers dipped.

He turned down more money in free agency from the Vikings and signed a one-year, $9.5 million deal to play for the Eagles in 2017. Jeffery played a key role in helping Philadelphia capture its first Super Bowl championship and was rewarded with a four-year, $52 million contract.

Jeffery had no problem adjusting to a different role his first season in Philadelphia, where he became one of several targets instead of being the main guy. He had 57 catches for 789 yards and nine TDs in 2017 while playing through a shoulder injury that required surgery after the season. He missed the first three games this season and still posted 65-843-6 in 13 games.

"The way he approaches each and every day and each and every practice, the way he takes care of himself, and certainly from a competitive maturity standpoint," Eagles wide receivers coach Mike Groh said, explaining how he's seen Jeffery grow since they were together in Chicago. "He understands the moment and what it takes and when he has to ramp it up and when he has to make plays to help us win. He's in a really good groove right now. I think he is playing with a lot of confidence."

Jeffery has been at his best with Nick Foles at quarterback and in the biggest games. He caught 16 passes for 301 yards and a touchdown in the past three games, all must wins with Foles behind center.

Jeffery knows he might hear some boos when he walks out onto Soldier Field, which he called "terrible" from a footing standpoint.

"Boos? It don't matter to me," Jeffery said. "I play for the Eagles. That comes with the nature of the business."

Jeffery already faced the Bears last season in Philadelphia, a 31-3 rout for the Eagles. He had five catches for 52 yards and one TD.