Annika Sorenstam contemplating a return to US Women's Open 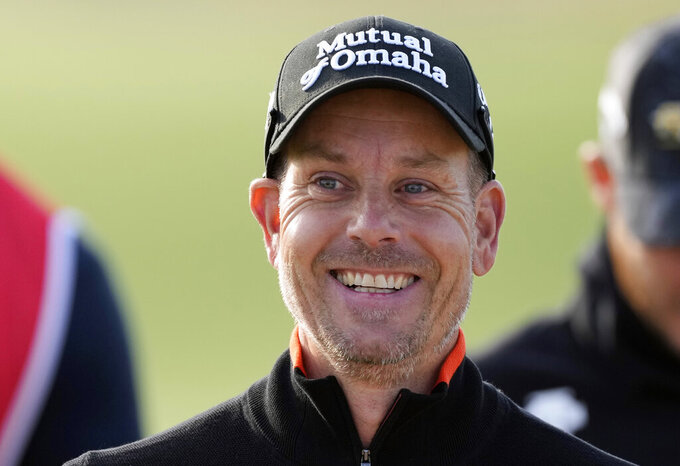 After 13 years in retirement, Annika Sorenstam returned to competition last year. She made the cut in the Gainbridge LPGA, playing only because it was her home course of Lake Nona in Orlando, Florida. And then she won the U.S. Senior Women’s Open.

That victory earned her a spot in the U.S. Women’s Open this year, which is being played at Pine Needles Lodge in North Carolina. That's where she won her second straight Women’s Open in 1996, an eight-shot victory.

Will she play? Sorenstam called it a “big possibility.”

“Obviously, I’m flattered about that and it’s Pine Needles, good memories with Peggy Kirk Bell. She won’t be there this time around, but the place has a fond place in my heart,” Sorenstam said last week. “But it’s hard to go out there and play against these young players, so if I can just go out there and have a good time and not be so competitive ... which is my biggest issue. I am so competitive, even though I don’t play as much.”

She said the objective would be to “go out there and relax and swing and see what happens.”

There appears to be some movement toward Europe finding its next Ryder Cup captain.

The Daily Mail reported last week that outgoing captain Padraig Harrington, who is part of the five-member committee picking the next captain, has thrown his support behind Luke Donald.

“Behind the scenes, he does a terrific job,” Harrington told the British newspaper. “He’s got the experience, and I’d thoroughly recommend him.”

Donald played in The American Express last week, saw the comments and expressed interest, referring to himself as detail-oriented.

“I would love to have the opportunity to do that,” Donald said. “I haven’t spoken to anyone at the European Tour so nothing is confirmed. I don’t know where I stand with that.”

Lee Westwood was thought to be a lock for Italy in 2023 until saying he was not interested this time around. Another name in the mix is Henrik Stenson.

“It’s good to be in the mix as a potential captain,” Stenson told Golf Digest. “I’ll have to wait and see though. I haven’t had any discussions with those making the decision.”

CBS Sports begins its coverage of the PGA Tour this week at the Farmers Insurance Open, and lead announcer Jim Nantz won’t miss it.

He just won’t be in San Diego.

The 17th game on the NFL regular-season schedule moved everything back a week. Torrey Pines used to be the week before the Super Bowl, and now it’s the week of the conference championship games. That’s why the schedule this year goes from San Diego to Pebble Beach (now the NFL off week) and then to Phoenix, which prefers to be held the week of the Super Bowl.

Nantz will be in Kansas City for the AFC title game between the Chiefs and the Bengals, calling the action from a production truck at Arrowhead Stadium.

“I didn’t want to miss it,” he said last week during a CBS preview of its golf coverage.

The tournament will start on Wednesday and end on Saturday to avoid the NFL. Nantz doesn’t expect his work during the final two rounds to interfere with his football preparation.

“You find after all these years that the anticipation of the next season is something that’s a part of your life,” Nantz said. “The end of the school year, the end of a fall semester or whatever it might be. In my world, I get to the end of certain seasons in a sport, and I can’t wait for the next one to begin. But my longing for golf to come back into my life again is the one that I feel the most.”

When golf returned after the shutdown caused by the pandemic in June 2020, Nantz was the only broadcaster at the course for several months. The others worked remotely.

Jon Rahm won the Vardon Trophy for the lowest adjusted scoring average on the PGA Tour, and he picked up one another award that won’t be announced until this summer.

Rahm went to No. 1 in the world when he won the U.S. Open, kept it for three weeks, regained it with his fifth-place finish in the British Open and then held it the rest of the year. He was No. 1 for a total of 27 weeks, giving him the Mark H. McCormack Award for most weeks at No. 1.

The trophy typically is presented at the British Open.

And if the Spaniard keeps the top spot until St. Andrews, he could be on his way to becoming the first player since Tiger Woods in 2009 to stay at No. 1 for an entire calendar year.

Dustin Johnson had won the award three of the last four years. Brooks Koepka won in 2019.

Jim Furyk, Jerry Kelly and Matt Kuchar all left the Sony Open for the Big Island last week. Only two of them played in the PGA Tour Champions season opener.

Kuchar simply headed back to his winter vacation home. He brought his family to the Big Island on Dec. 21 and won’t be leaving until he gets on a plane for the AT&T Pebble Beach Pro-Am.

For years, Kuchar headed to Palm Springs, California, which was his home base while he played the West Coast swing. Now it’s Hawaii.

Hudson Swafford was No. 166 in the world ranking when he won The American Express. That ended a stretch of 47 consecutive PGA Tour events (opposite-field events excluded) where the winner was among the top 150. ... Vidanta Vallarta has a three-year deal to host what will be called the Mexico Open at Vidanta. It's a result of a new alliance between two big Mexican companies, Grupo Salinas and Grupo Vidanta. It was Grupo Salinas that first brought a World Golf Championship to Mexico City. It now has a PGA Tour event in Puerto Vallarta that will be held the last week in April. ... NBC Sports says it will have 650 hours of LPGA Tour coverage this year, an increase of roughly 60 hours on mainly Golf Channel, with NBC, USA or CNBC at majors and the season-ending Tour Championship. The lone event available only through streaming on Peacock is the LPGA Drive On Championship next week. ... For the first time since it began in 1998, the Qatar Masters will not be part of the early Middle East swing on the European Tour. Originally scheduled for Feb. 10-13, it has been moved until later in the spring because of COVID-19 restrictions. In its place will be the Ras Al Khaimah Classic, which follows the Ras al Khaimah Championship. Both events are at Al Hamra Golf Club.

Dustin Johnson has gone 20 straight PGA Tour events without winning, his longest such stretch since 29 starts between victories at Doral in 2015 and the U.S. Open in 2016.