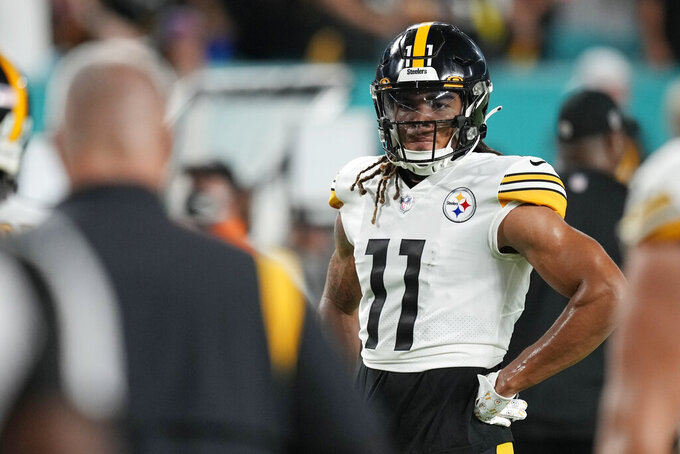 A person with knowledge of the deal tells The Associated Press the Pittsburgh Steelers have traded Claypool to Chicago for a second-round pick in the 2023 draft. The person spoke to the AP on condition of anonymity because the deal was not official.

The trade gives Chicago quarterback Justin Fields a downfield threat in an effort to boost a passing attack that ranks last in the NFL, averaging just 126.9 yards per game.

Claypool has 32 receptions for 301 yards and one touchdown this season for the Steelers (2-6). He also threw the first touchdown pass of his career in last week's loss to Philadelphia with a short flip to fullback Derek Watt on a gadget play.

The 6-foot-4 Claypool, however, became expendable thanks to the emergence of rookie George Pickens.

Pickens has quickly emerged as Pittsburgh's No. 2 receiver, bumping Claypool to third on the depth chart behind Pickens and Diontae Johnson.

Claypool was a revelation in 2020 after being grabbed in the second round, scoring 10 touchdowns (eight receiving, two rushing) in his first 10 games while helping Pittsburgh get off to an 11-0 start on its way to the AFC North title.

Replicating that production has proven difficult. Claypool has just four touchdowns in his past 29 games.

The trade gives the rebuilding Steelers more capital in the 2023 draft to help out a group searching for a new identity in its first year without Ben Roethlisberger, who retired in January.

Pittsburgh's 2-6 start is its worst since 2013. The defense has struggled without injured star linebacker T.J. Watt and the offense is sputtering behind rookie quarterback Kenny Pickett.