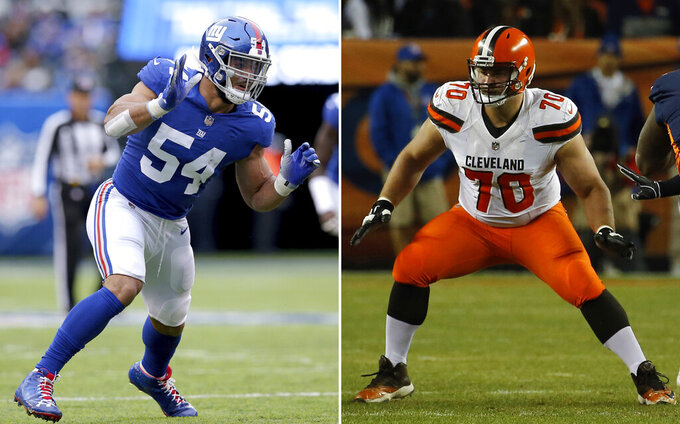 FILE - At left, in an Oct. 28, 2018, file photo, New York Giants linebacker Olivier Vernon (54) plays against the Washington Redskins during an NFL football game, in East Rutherford, N.J. At right, in a Dec. 15, 2018, file photo, Cleveland Browns offensive guard Kevin Zeitler (70) plays against the Denver Broncos during the first half of an NFL football game, in Denver. A person familiar with the deal says the Cleveland Browns have traded guard Kevin Zeitler to the New York Giants in exchange for defensive end Olivier Vernon. The teams are also swapping the second-round picks, said the person who spoke Friday, March 8, 2019, to the Associated Press on condition of anonymity because the teams have not announced the trade. (AP Photo/Files)

Looking for a pass rusher to bookend with Pro Bowler Myles Garrett, Cleveland has agreed to acquire defensive end Olivier Vernon from the New York Giants in exchange for guard Kevin Zeitler, a person familiar with the deal told the Associated Press.

The teams are also swapping draft picks, with the Browns getting No. 132 for pick No. 155, said the person who spoke on condition of anonymity Friday because the teams have not announced the trade.

The trade won't become official until 4 p.m. on March 13, the start of free agency and the NFL's calendar year.

The 28-year-old Vernon started 39 games over three seasons with the Giants. He'll give the Browns needed depth and experience up front. Vernon has 51 sacks in seven seasons, including seven last year when he was named a Pro Bowler in New York. Vernon, who has had some injury issues, spent his first four with the Miami Dolphins.

Vernon's arrival as another edge rusher could free up Garrett from double teams and allow the Browns to focus on a defensive tackle in the draft. There is depth at that position in this year's class, and Cleveland could land one with the No. 17 overall pick.

Vernon is set to make $15.5 million in each of the two remaining years on his contract.

Zeitler just completed his second season with the Browns, who signed him to a five-year, $60 million deal as a free agent in 2017 after five seasons with Cincinnati. The 29-year-old was one of Cleveland's best linemen last season, helping anchor the group following Pro Bowl tackle Joe Thomas' retirement.

Zeitler's spot will likely be filled by Austin Corbett, a second-round pick last season. Zeitler joins an underperforming line in New York that he should upgrade significantly.

The Giants struggled mightily to protect Eli Manning last season, allowing 47 sacks. But running back Saquon Barkley was the league's Offensive Rookie of the Year despite playing behind an inconsistent unit.

Zeitler should vastly improve that group, although New York could look to draft offensive linemen next month. But his addition allows the Giants to focus their first-round spot, sixth overall, on other needs, perhaps even on a quarterback.

New York also re-signed center Jon Hilapio, who was an exclusive-rights free agent and is projected to be a starter in 2019.

Halapio started the first two games of 2018 before he broke his right leg and ankle and underwent surgery, missing the rest of the season.

The trade for Vernon is the second major move on the eve of free agency by Browns general manager John Dorsey. He released veteran linebacker Jamie Collins earlier this week.

NOTES: The Browns tendered restricted free agent wide receiver Rashard Higgins and two exclusive rights free agents: defensive tackle Trevon Coley and defensive back Jermaine Whitehead. A fifth-round pick in 2016 by Cleveland, Higgins had a breakout season in 2018 with 39 catches for 572 yards and four touchdowns. If Higgins agrees to a deal with another team, the Browns can match it. If they decline, the Browns would get a fifth-round pick as compensation. Coley has started 29 games over the past two seasons. Whitehead played only special teams in seven games after being claimed on waivers from Green Bay.