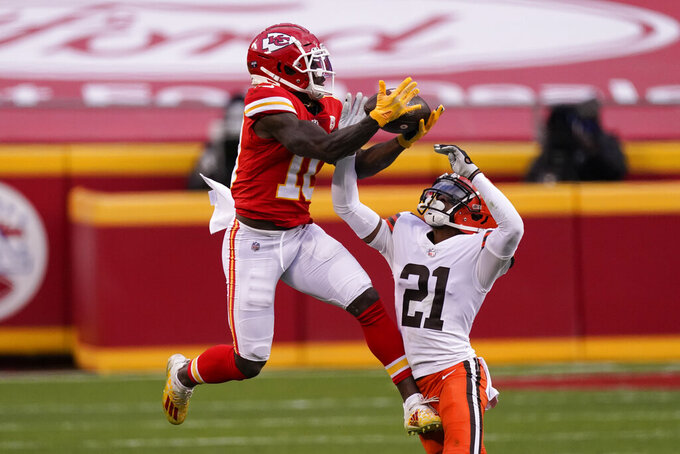 FILE - Kansas City Chiefs wide receiver Tyreek Hill makes a catch over Cleveland Browns cornerback Denzel Ward (21) during the second half of an NFL divisional round football game, Sunday, Jan. 17, 2021, in Kansas City. The Kansas City Chiefs traded wide receiver Tyreek Hill to Miami for a package of draft picks on Wednesday, March 23, 2022, and the Dolphins are giving the three-time All-Pro a $120 million, four-year contract extension, a person familiar with the moves told The Associated Press. (AP Photo/Charlie Riedel, File)

KANSAS CITY, Mo. (AP) — The Kansas City Chiefs have agreed with wide receiver Marquez Valdes-Scantling on a $30 million, three-year contract to help replace the departed Tyreek Hill, a person familiar with the contract told The Associated Press on Thursday.

The person spoke to the AP on condition of anonymity because the deal was pending a physical.

The move came one day after the Chiefs traded Hill, a three-time All-Pro and one of the league's most dangerous downfield threats, to the Dolphins for a package of five draft picks. It also comes less than a week after the Chiefs landed JuJu Smith-Schuster with a club-friendly, one-year deal in the hope that he'll bounce back from a shoulder injury.

Valdes-Scantling was a fifth-round pick of the Packers in the 2018 draft, quickly becoming a useful option for quarterback Aaron Rodgers in the passing game. He caught 123 passes for 2,153 yards and 13 touchdowns during his first four seasons in the league, appearing in all 16 games the first three before a hamstring injury hampered him last season. He wound up playing 11 games and catching 26 passes for 430 yards and three touchdowns.

Earlier in the day, the Chiefs announced the signing of wide receiver Corey Coleman, the No. 15 overall pick in the 2016 draft, in the hope that he can showcase the dynamic playmaking ability that once made him a star at Baylor.

Coleman spent two seasons with the Browns, catching 56 passes for 718 yards and five touchdowns, before he was traded to the Bills for a future seventh-round pick. Buffalo quickly released Coleman, then he spent time with the Patriots before he ended up with the Giants, where he appeared in eight games and caught five passes for 71 yards in 2018.

That was the last time he played in a game, though. The 27-year-old Coleman tore his ACL during the following preseason, then spent parts of the 2020 season on the Giants practice squad before spending last season out of football.

The Chiefs announced several other contracts on Thursday.

Defensive tackle Derrick Nnadi is returning after starting 52 of 64 games played since the Chiefs selected him in the third round of the 2018 draft. He's primarily a run-stuffer but is coming off a career-best three sacks last season.

The Chiefs also announced the return of quarterback Chad Henne to back up Patrick Mahomes, the signing of Austin Reiter to back up center Creed Humphrey, and left tackle Geron Christian, who made eight starts for Houston last season.

Blake Bell is also returning on a one-year deal. He helped the Chiefs win the Super Bowl during the 2019 season, then spent a year in Dallas before returning to Kansas City, where he served mostly as a blocking tight end last season.