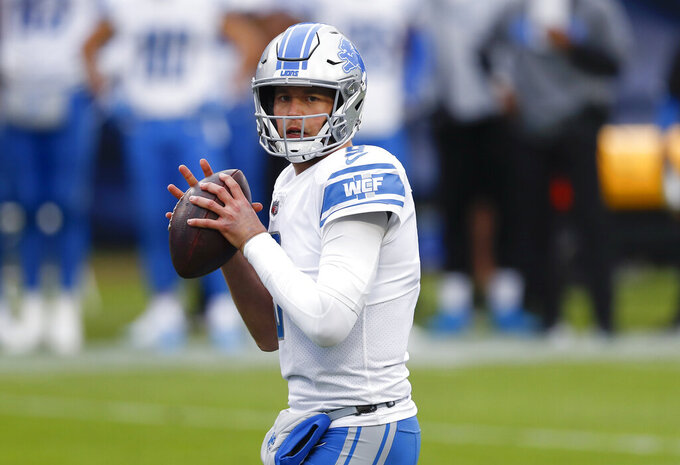 FILE - In this Dec. 20, 2020, file photo, Detroit Lions quarterback Matthew Stafford looks to past against the Tennessee Titans during the first half of an NFL football game in Nashville, Tenn. A person with direct knowledge of the situation says the Lions and Stafford have mutually agreed to explore the possibilities of trading him. The person spoke Saturday night, Jan 23, to The Associated Press on condition of anonymity because the team and Stafford did not announce the decision. (AP Photo/Wade Payne, File)

The Detroit Lions and quarterback Matthew Stafford are planning to part ways.

The Lions and Stafford have mutually agreed to explore the possibilities of trading him, according to a person with direct knowledge of the situation. The person spoke Saturday night to The Associated Press on condition of anonymity because the team and Stafford did not announce the decision.

Stafford expressed an interest in being traded after the season ended and the team responded by tabling the idea until a new general manager and coach were hired, the person said. Stafford was on a call with Lions general manager Brad Holmes and coach Dan Campbell earlier this week, according to the person, and they discussed moving on without each other.

Detroit drafted Stafford No. 1 overall in 2009 and he has two years left on a $135 million, five-year contract.

Stafford surpassed the 45,000-yard mark in the 165th game of his career, the fewest games an NFL player has had to reach that number, during the finale of the 2020 season. He threw three touchdown passes in that game against Minnesota to raise his career total to 282 .

Like many of Stafford’s accomplishments in Detroit, they were marred by a loss as the Lions fell to 5-11 last for their third straight double-digit loss season and his career record dropped to 74-90-1 in the regular season.

Detroit drafted the strong-armed Stafford out of Georgia with the hopes he could help the franchise have playoff success, building on the one playoff victory it has earned since winning the 1957 NFL title.

The Indianapolis Colts and New England Patriots are among the teams that may have an interest in Stafford, who turns 33 in February.

Stafford earned Pro Bowl recognition in 2014 season and was AP's Comeback Player of the Year in 2011 after bouncing back from an injury-stunted start of his career. He is No. 16 on the league's all-time list with 45,109 yards passing and 282 passing touchdowns.

The Lions have the No. 7 overall pick this year and likely will be looking for a quarterback, possibly Buckeyes star Justin Fields.