AP source: Panthers cut Boston, 2 others to save cap space 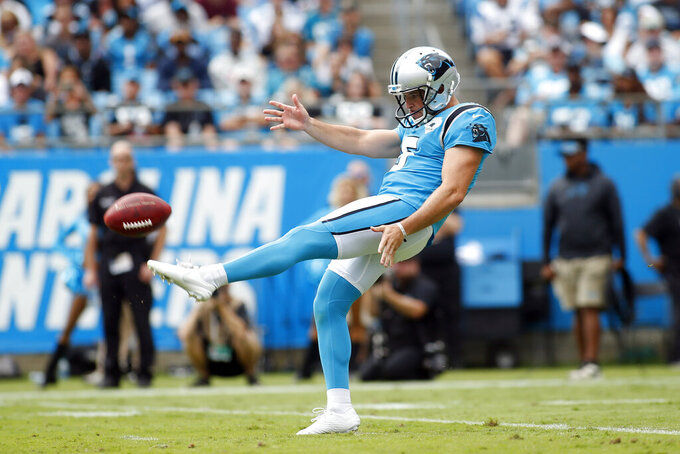 FILE - Carolina Panthers punter Michael Palardy (5) kicks against the Jacksonville Jaguars during the first half of an NFL football game in Charlotte, N.C., in this Sunday, Oct. 6, 2019, file photo. The Carolina Panthers are releasing veteran safety Tre Boston, defensive end Stephen Weatherly and punter Michael Palardy in a salary-cap, cost-cutting move, a person familiar with the situation told The Associated Press. The person spoke on condition of anonymity Friday, Feb. 19, 2021, because the moves have not been announced. (AP Photo/Brian Blanco, File)

The person spoke on condition of anonymity Friday because the moves have not been announced.

The moves will free up about $11.5 million in cap space for the Panthers, who are in the market for a quarterback and want to either re-sign or use the franchise tag on offensive tackle Taylor Moton.

The decision to release Boston comes after he signed a three-year, $18 million contract last offseason that included $8 million in guaranteed money.

Boston started all 16 games last season for the Panthers and had 95 tackles, two fumble recoveries, one interception and one sack.

This was Boston's second stint in Carolina. He spent three years in Carolina before leaving to play a year each with the Los Angeles Chargers and Arizona Cardinals. Boston has played in 104 career games with 76 starts during his seven-year NFL career.

It's unclear at this point if last year's rookie standout Jeremy Chinn will move from linebacker to safety to fill Boston's spot. Either way, the Panthers will have another hole to fill on defense.

Boston is the second defensive starter to be released this week. The team released two-time Pro Bowl defensive tackle Kawann Short on Tuesday.

Palardy injured a knee last offseason and didn't play at all last season.

Weatherly signed with Carolina last offseason but played in only nine games and had 17 tackles and no sacks.