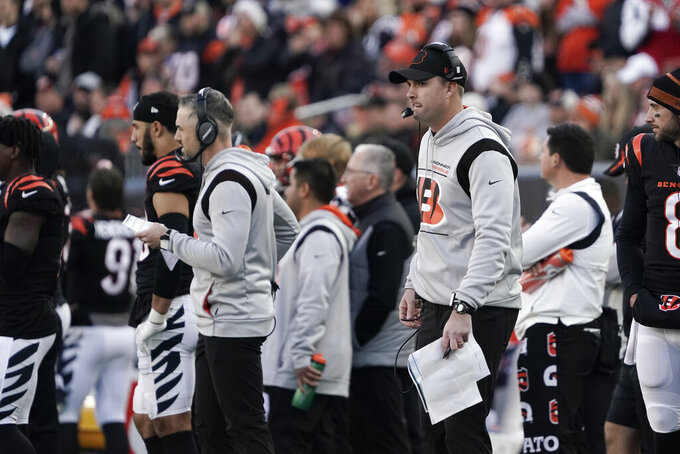 CINCINNATI (AP) — The Cincinnati Bengals came into Sunday's home game riding a wave of momentum and confidence after a pair of dominating wins.

By the end of the afternoon, the mistake-prone Bengals were left to contemplate a strange 41-22 loss to the Los Angeles Chargers. Cincinnati's star quarterback Joe Burrow walked off nursing a dislocated pinky finger, and numerous other injuries gave coach Zac Taylor more to worry about this week.

Burrow has vowed not to miss a game because of it. Taylor said he'll be limited in practice and is day to day.

The loss dropped the Bengals to 7-5. They're still in the chaotic AFC playoff picture, but squandered a chance to move up among the leaders. The Chargers are now 7-5, too, but hold the tiebreaker over the Bengals.

“You're going to lose some games — it's about how you bounce back,” Burrow said.

The Chargers stormed out to a 24-0 second-quarter lead before the Bengals could straighten things out. They got to 24-13 by halftime, and Joe Mixon's 7-yard touchdown run cut the deficit to 24-22 in the third quarter.

But early in the fourth quarter, Mixon fumbled and Chargers cornerback Tevaughn Campbell scooped it up and ran 61 yards the other way for a touchdown. Burrow was intercepted in the end zone later in the fourth and Cincinnati couldn't make another serious threat.

“There's not any moral victories, but we put ourselves in a position to win,” Burrow said.

Not much on Sunday. But the Bengals did show resiliency, with the injured Burrow leading them to 22 unanswered points after a terrible start. Burrow dislocated his right little finger on a strip-sack on the Bengals' first series. Still, he tossed a 29-yard touchdown to Tee Higgins to get Cincinnati on the board, and then showed his grit by scrambling for a 6-yard TD late in the first half.

Cincinnati's slow start had it playing from behind the entire game. Two starting offensive linemen were out with injuries and the blocking suffered. The Chargers, with the worst run defense in the NFL, bottled up Mixon after his back-to-back 100-yard games. Justin Herbert threw for 317 yards and three touchdowns.

“I think we can take some positives out of this thing,” Taylor said. “We're not looking to take many of them out. A lot of guys got in there and held the fort down."

Burrow threw for 300 yards and a touchdown, but had two interceptions, six sacks and lost the ball on a strip-sack. One interception was in the end zone. The other wasn't Burrow's fault. Receiver Ja'Marr Chase bobbled a ball that hit him in stride down the right sideline, and Chargers cornerback Michael Davis grabbed it out of the air at the Los Angeles 30. Chase had at least one other dropped pass in the game.

“There's no secret here. When you turn the ball over four times — four times — you're probably not going to win a football game,” Taylor said. “It's as simple as that.”

Starting OL linemen Riley Reiff and Trey Hopkins both have ankle injuries and are day to day. ... The team's best linebacker, Logan Wilson, was carted off the field with a shoulder injury. Taylor said he'll miss at least a couple of weeks ... LB Markus Bailey (left shoulder stinger) and CB Chidobe Awuzie (foot) are day to day.

The Bengals have had some big wins and big losses. Now they have to try to rebound from a mistake-filled debacle, led by a star quarterback with a sore finger. The San Francisco 49ers (6-6) come to town Sunday. Two of the Bengals' five remaining games are against AFC North foes Baltimore and Cleveland.