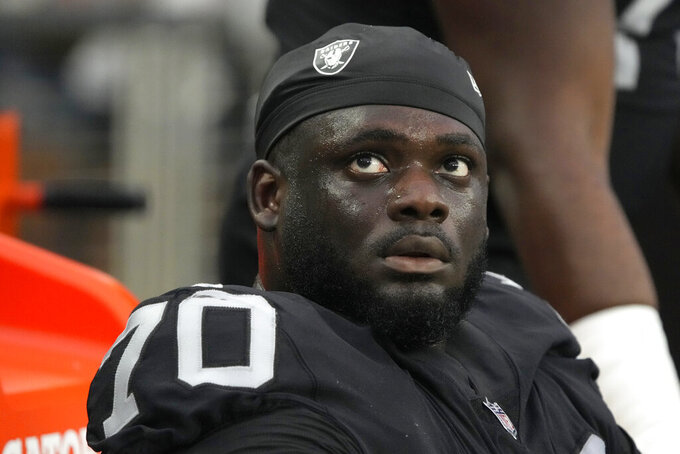 FILE - Las Vegas Raiders offensive tackle Alex Leatherwood looks up during the first half of the team's NFL preseason football game against the Minnesota Vikings on Aug. 14, 2022, in Las Vegas. The Raiders waived Leatherwood on Tuesday, Aug. 30, the third of the club's three first-round draft picks in 2020-21 to get dumped before the end of their second season. (AP Photo/Rick Scuteri, File)

Leatherwood, the No. 17 overall pick last year, struggled at right tackle before being moved to guard after four games. The Alabama product had difficulties inside, too, and dropped on the depth chart this summer before Las Vegas let him go. It's the first time the Raiders got rid of a first-round pick prior to his second season since 1988, when they dealt 1987 first-rounder John Clay to the Chargers for Jim Lachey.

The Bears have retooled their offensive line after giving up a league-leading 58 sacks last season. Leatherwood could complete with right guard Teven Jenkins and right tackle Larry Borom.