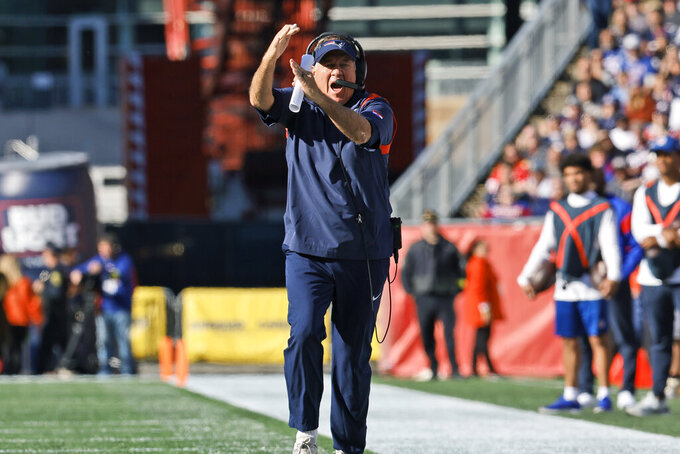 New England Patriots head coach Bill Belichick calls for a time out during the second half of an NFL football game against the Detroit Lions, Sunday, Oct. 9, 2022, in Foxborough, Mass. (AP Photo/Michael Dwyer)

OPENING LINE: Browns by 3 according to FanDuel SportsBook.

TURNOVER DIFFERENTIAL: Patriots minus-2; Browns even.

PATRIOTS PLAYER TO WATCH: RB Rhamondre Stevenson. He's taken on a bigger role in the rushing attack and had a career-high 161 yards last week. Stevenson will be even more integral this week with Damien Harris dealing with a hamstring injury. Cleveland has given up more than 200 yards the past two weeks and the Patriots will make the Browns stop them.

BROWNS PLAYER TO WATCH: QB Jacoby Brissett. He's played better than expected while filling in while Deshaun Watson serves his suspension. However, Brissett has thrown three interceptions late in Cleveland's three losses and the Browns, with their defensive issues, have little margin for error.

KEY MATCHUP: Patriots LB Matthew Judon vs. Browns LT Jedrick Wills Jr. and RT Jack Conklin. Judon was the AFC's Defensive Player of the Week after mauling the Lions. He got two sacks, forced a fumble and was credited with seven QB pressures against the Lions. New England isn't averse to moving him around to find the right matchup so the Browns will have to be on their toes.

KEY INJURIES: Patriots QB Mac Jones (ankle) was listed as questionable as he continues to recover from an ankle injury that has sidelined him each of the past two games. ... LB Josh Uche is out with a hamstring issue ... DT Lawrence Guy is questionable after sitting out against the Lions with a shoulder injury. ... RB Damien Harris is questionable with a hamstring issue. ... Browns DE Jadeveon Clowney (ankle, knee, elbow) and Pro Bowl CB Denzel Ward (concussion) are both out. This will be Clowney's third missed game in four weeks. Ward has had at least three concussions in the past four seasons.

SERIES NOTES: The teams are meeting for the second straight season, with New England holding a 13-12 edge in regular-season matchups. ... Cleveland won the only postseason meeting when the Bill Belichick-coached Browns beat the Patriots 20-13 on Jan. 1, 1995. ... The Patriots have won four straight. ... This is the first meeting in Cleveland since New England's 33-13 win on Oct. 9, 2016. ... The Browns scored the game's first TD last year, the Patriots the next 45.

STATS AND STUFF: Belichick enters Sunday with 323 career victories (including playoffs), one shy of tying George Halas for second place among NFL coaches. Don Shula is first with 347. Belichick won 36 games with the Browns from 1991-1995. ... Belichick is 8-2 vs. the Browns. ... The Patriots will be looking to average at least 5.0 yards per carry for a fourth straight game for the first time. They've had three, three-game stretches (1977, 2020, 2022). ... The Patriots are converting on just 40% (6 of 15) of their chances in the red zone. ... New England hasn't posted back-to-back shutouts since 1982 when they beat Miami 3-0 and Seattle 16-0. ... LB Matt Judon was the AFC Defensive Player of the Week after having two sacks, a tackle for loss and forcing a fumble vs Detroit. He's the only player in the league with a sack in each of the first five weeks. Judon enters tied with San Francisco's Nick Bosa and Dallas' Micah Parsons with six sacks. With a sack this week, he'll set the team record for the most over six games. Judon (2021), Chandler Jones (2015) and Andre Tippett (1984) hold the record with 6 1/2. ... K Nick Folk extended his NFL record to 63 straight field goals under 50 yards with five against the Lions. His most recent miss inside the 50 was a 45-yarder in the 2020 opener. ... S Devin McCourty is one of three active players with at least 30 interceptions. ... Rookie DB Jack Jones has an INT each of the past two games. He can become the first New England rookie with a pick in three consecutive games since McCourty in 2010. ... The Browns lead the NFL with 962 rushing yards, averaging 192.4 per game. ... Cleveland leads the league in rushing first downs (57), runs over 10 yards (33) and runs over 20 yards (11). ... RBI Nick Chubb is first in rushing yards (593) and TDs (seven). ... WR Amari Cooper rebounded from a one-catch game to get seven for 76 yards and a TD last week. ... DE Myles Garrett remains one sack shy of Clay Matthews career record for sacks (62). Garrett played last week after missing one game following a car crash but had minimal impact. ... The Browns gave up 238 yards rushing last week to the Chargers, who came in averaging a league-low 64.5 per game. ... Cleveland traded for LB Deion Jones this week to help its rushing defense. He spent six seasons with Atlanta. ... Rookie K Cade York missed a potential game-winning kick from 54 yards last week with 11 seconds left. Earlier he misfired on a 45-yarder. York has also missed two PATs at home.

FANTASY TIP: Belichick typically tries to take away an opponent's strengths, so look for the Patriots to stack the box to slow Chubb. That could open things up for Cooper, who is Brissett's favorite playmaker as Cleveland's most seasoned and dependable receiver.