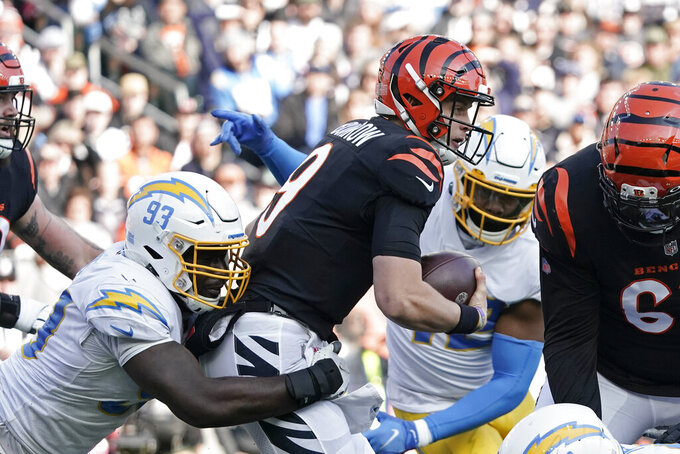 BETTING LINE: 49ers by 1, according to FanDuel SportsBook.

TURNOVER DIFFERENTIAL: 49ers minus-4; Bengals minus-2.

49ers PLAYER TO WATCH: DE Nick Bosa has a career-high 12 sacks this season. His 102 sack yards are most in the NFL. Bosa and Bengals quarterback Joe Burrow are buddies from their Ohio State days, and Burrow is likely to be running from him often.

KEY MATCHUP: Burrow vs. 49ers' pass defense. Burrow, after dislocating the little finger on his throwing hand, had one of his worst games of the season. He completed a season-low 60% of his passes, tossed two interceptions and was sacked six times. San Francisco's pass defense has been solid, holding opponents to an average of 205.1 yards per game through the air.

Bengals: Burrow dislocated the pinky finger on his throwing hand last Sunday and is limited in practice this week. ... Offensive linemen Riley Reiff and Trey Hopkins already missed a game and are day to day with ankle injuries. ... LB Logan Wilson is expected to miss at least a couple weeks with a shoulder injury. ... LB Markus Bailey (left shoulder stinger) and CB Chidobe Awuzie (foot) are day to day. ... G D’Ante Smith and CB Trae Waynes have been cleared to practice.

STATS AND STUFF: Niners LB Azeez Al-Shaair had 16 tackles, a forced fumble and a half-sack last week. ... San Francisco forced four fumbles last week, the most in a game since the 49ers had five in a loss to the Seahawks on Nov. 11, 2019. They lead the NFL with 18 forced fumbles on the season. ... San Francisco is second in the NFL with 50 points scored in the final two minutes of the first half. ... The 49ers rank second in the NFL gaining 6.31 yards per play on first down. ... San Francisco has converted a league-best 77.4% of red-zone drives into TDs. ... Niners QB Jimmy Garoppolo has thrown three INTs the past two weeks after having only one the previous four games. ... The Bengals went down 24-0 in the first half before losing to the Chargers 41-22 last week. They had previously won two straight. ... Cincinnati has the fewest penalties (50) and penalty yards (424) in the NFL. ... The Bengals' offense in third in the league in red-zone TD percentage (69.7). ... Burrow ranks third in the NFL in yards per passing attempt (8.27) and fourth in pass plays of 40 or more yards (9). ... Cincinnati RB Joe Mixon is second in the league in rushing yardage (978) and attempts (227). He's tied for third with 12 rushing TDs. ... The Cincinnati defense is tied for fourth in rushing yards allowed per game (92.5), fourth-down efficiency (42.9; 6 for 14), and sacks (32). ... Bengals rookie WR Ja’Marr Chase is tied for third with six receptions of 40 or more yards, and tied for fourth with eight TD catches. ... Bengals K Evan McPherson is tied for first in the NFL with seven field goals of 50 or more yards.