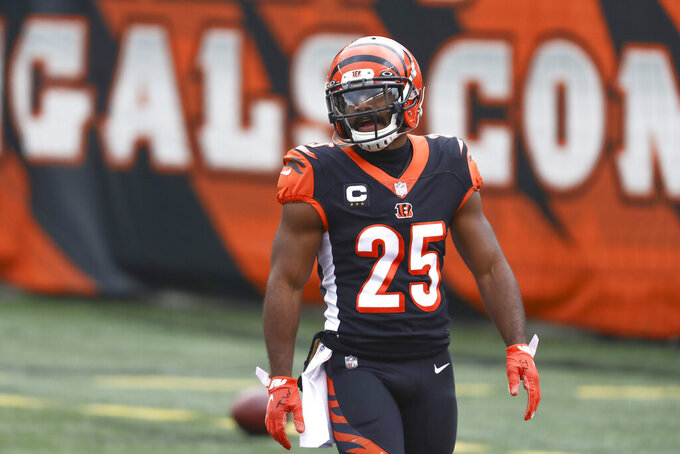 FILE - Cincinnati Bengals running back Giovani Bernard (25) warms up before an NFL football game against the Baltimore Ravens in Cincinnati, in this Sunday, Jan. 3, 2021, file photo. The Bengals continued to part with veterans when they released running back Giovani Bernard on Wednesday, April 7, 2021. Bernard, a free agent, played his entire eight-year NFL career in Cincinnati and established himself as a reliable blocking back and receiver.(AP Photo/Aaron Doster, File)

CINCINNATI (AP) — The Cincinnati Bengals continued to part with veterans when they released running back Giovani Bernard on Wednesday.

Bernard, a fan favorite who had a year left on a two-year contract that would have paid him $4.1 million in 2021, played his entire eight-year NFL career in Cincinnati and established himself as a reliable blocking back and receiver. The 29-year-old Bernard became a starter for the last 10 games of 2020 after Joe Mixon suffered a foot injury.

A 2013 second-round draft pick by the Bengals, he played in 115 games with 30 starts, rushing for 3,697 yards and 22 touchdowns. His 342 receptions are the most by a running back in Bengals history, and his 2,867 receiving yards are the second most.

The Bengals had already traded defensive end Carlos Dunlap in midseason last year and released defensive tackle Geno Atkins last month. Both had been with the Bengals for 11 seasons. Receiver A.J. Green, who'd spent his entire 10-year career with the team, signed with Arizona as a free agent.

Bernard's best performance on the ground during his stint as a starter last year was 83 yards in a Monday Night Football upset of the the Pittsburgh Steelers on Dec. 21, his best since the 2017 season. He finished 2020 with 124 carries for 416 yards and three touchdowns, to go along with 47 receptions for 355 yards and another three scores.

Cincinnati let Bernard go after extending the contract of feature back Mixon last fall with a four-year, $48 million deal and the re-signing of Samaje Perine, who played in all 16 games last year, to a two-year pact.

“No better friend, teammate and mentor” than Bernard, Mixon said in a tweet Wednesday. “I’ll always cherish our time together and can’t thank him enough for all he has meant to my career. Wherever he goes is getting a great player and even better person.”