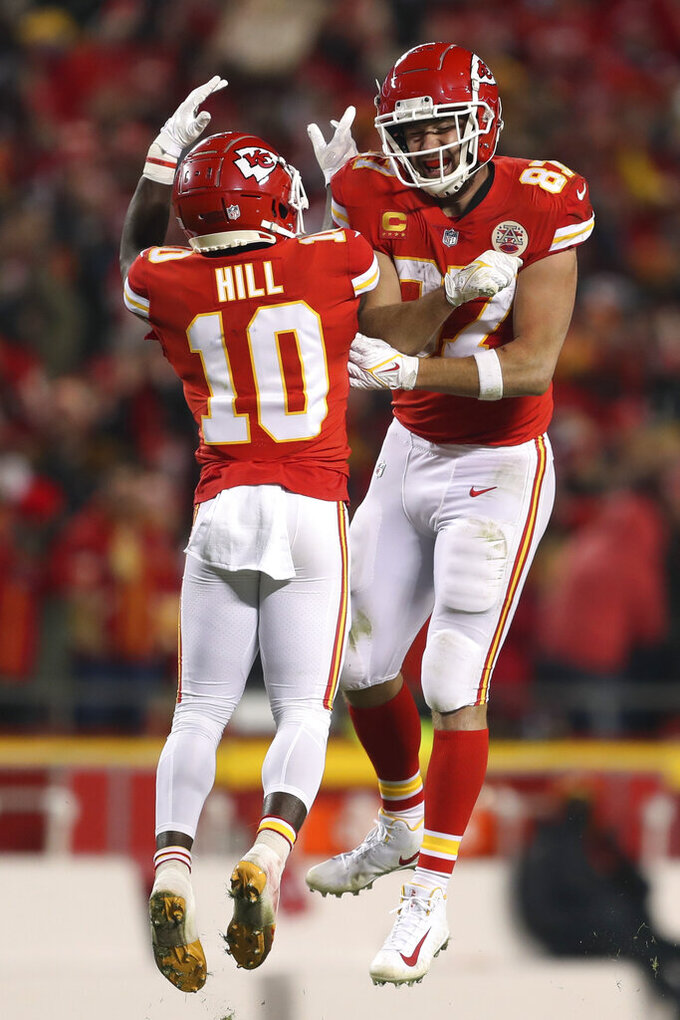 BETTING LINE: Chiefs by 1 1/2, according to FanDuel SportsBook.

TURNOVER DIFFERENTIAL: Bills plus-8; Chiefs plus-4.

BILLS PLAYER TO WATCH: RB Devin Singletary was an afterthought the first 12 games of the season with just 495 yards and two touchdowns; that included 25 yards rushing in a 38-20 win in Kansas City. But in the past six games, Singletary has combined for 456 yards and seven TDs, including one score through the air.

CHIEFS PLAYER TO WATCH: TE Travis Kelce dealt with COVID-19 late in the season, but it hardly hampered him against the Steelers last week. He had five catches for 108 yards and a touchdown while also throwing a TD pass on a trick play.

KEY MATCHUP: Chiefs QB Patrick Mahomes will face the league's No. 1 pass defense and overall defense, one week after he was 30 of 39 for 404 yards and five TDs against the Steelers. He became the first player in NFL history with at least 400 yards passing, five TDs and fewer than 10 incompletions in a postseason game. Mahomes was 33 of 54 for 272 yards with two touchdowns and two interceptions in a loss to Buffalo in October.

SERIES NOTES: The Bills and Chiefs have split four previous playoff meetings with Kansas City winning last year's AFC title game 38-24. Buffalo beat the Chiefs 38-20 when the teams met in October. The franchises date back to the AFL, in which the Chiefs won the only playoff meeting.

STATS AND STUFF: The winner of this game will host Cincinnati for the AFC championship. ... The Chiefs have won five straight playoff games at Arrowhead Stadium. It is the longest current streak in the NFL. ... Kansas City is trying to reach the AFC title game for the fourth straight year, joining the Raiders (1973-77), Bills (1990-93) and Patriots (2016-18) as the only teams with at least that many in a row. ... The Bills are making their third consecutive playoff appearance and fourth in five years under Sean McDermott. ... Buffalo has won a playoff game in consecutive years for the first time since its four-year Super Bowl run (all losses) from 1990-93. ... Buffalo has lost eight straight playoff games away from home, including Super Bowl losses at the Rose Bowl and Georgia Dome. Buffalo’s last win away from home came at Miami 29-10 in the AFC championship game on Jan. 17, 1993. ... Buffalo scored on each of its first seven drives against New England last week, becoming the NFL’s first playoff team to finish a game with no punts, field goals or turnovers. ... QB Josh Allen’s five TDs passing against New England set a Bills playoff record. By completing 21 of 25 attempts for 308 yards, Allen finished with a 157.6 passer rating, the second best in an NFL playoff game behind Peyton Manning’s 158.3 in the Colts' 41-10 win over Denver in a wild-card game in 2004. ... Allen has 303 yards rushing in five playoff games to rank third behind Kenneth Davis (549) and Hall of Famer Thurman Thomas (1,442) in franchise history. ... The Bills are 9-0 this season when scoring a TD on their opening drive and 12-2 when topping 100 yards rushing. ... The Bills finished the season allowing an NFL-low 12 TDs passing. ... Chiefs coach Andy Reid could tie Don Shula for third-most postseason wins with his 19th. ... Mahomes was fourth in the NFL with 4,839 yards passing this season. He also had 37 TD passes. ... Mahomes needs 50 yards passing to surpass Russell Wilson (2,777) for most postseason yards in a player's first five seasons. ... Kelce has caught at least one pass in 126 consecutive games. He had 1,125 yards receiving this season for his sixth straight 1,000-yard season. ... Kelce had 118 yards and two TD receptions in last year's AFC title game against Buffalo. He needs six catches to pass Reggie Wayne (93) for fourth most in the postseason. He needs two TD catches to tie John Stallworth (12) for third in the postseason. ... WR Tyreek Hill set the Chiefs' record with 111 catches this season. He had 1,239 yards receiving. Hill had 172 yards receiving against the Bills in last year's AFC championship game. ... Chiefs DE Frank Clark needs one sack to tie Reggie White (12) for fourth most in the postseason since sacks became an official stat in 1982. ... Chiefs RB Jerick McKinnon had 142 yards from scrimmage against Pittsburgh. He became the fifth player in the past nine postseasons with at least 60 yards rushing and 60 yards receiving in a single game. ... The Chiefs held the Steelers to 44 yards of offense in the first half of last week's 42-21 win.