Bills return from bye week off to host skidding Dolphins 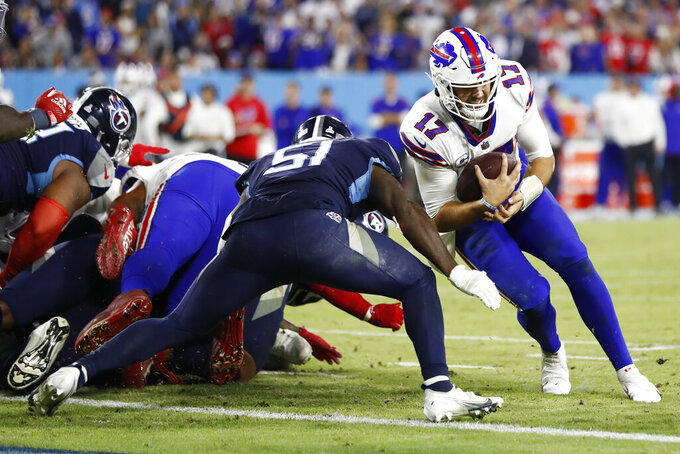 OPENING LINE: Buffalo by 13 1/2, according to FanDuel SportsBook.

TURNOVER DIFFERENTIAL: Dolphins minus-2, Bills plus-11.

DOLPHINS PLAYER TO WATCH: QB Tua Tagovailoa. After all the trade talk, all the doubting and a whole lot of losing, Tagovailoa came out last week and played his best game as a pro.

BILLS PLAYER TO WATCH: QB Josh Allen. After losing his first career meeting against Miami in 2018, Allen has overseen six straight wins in which he’s gone a combined 113 of 178 for 1,500 yards with 17 TDs passing and three TDs rushing.

KEY MATCHUP: Tagovailoa, making his 14th career start, vs. Buffalo defense. Tagovailoa lasted two series in Week 2 before hurting his ribs while being sacked, which led to him missing three games. The Bills have won 11 straight against quarterbacks with 16 or fewer starts.

KEY INJURIES: The Dolphins have a slew of big questions entering this week, including LB Jerome Baker (knee, hurt last week), CB Xavien Howard (shoulder and groin issues but played last week), CB Noah Igbinoghene (knee, ankle), WR DeVante Parker (shoulder, hamstring) and LB Jaelan Phillips (ankle). ... The Bills are healthy coming out of their bye with the exception of starting TE Dawson Knox, who has already been ruled out after having surgery last week to repair a broken right hand.

SERIES NOTES: Buffalo has won the last six games between the teams by an average score of 39-19. The Dolphins have never lost seven in a row to Buffalo. ... In those six games, the Bills have forced a combined 14 takeaways (seven fumbles, seven interceptions), made 22 sacks and have only once allowed 100 yards rushing.

STATS AND STUFF: The Bills are Miami’s second consecutive opponent coming off a bye week. ... Miami has lost six straight since an season-opening win over New England. The Dolphins haven't lost seven straight since an 0-7 start to their 2019 season. ... The Dolphins are 6-0 in games played on Halloween. ... Tagovailoa has combined to go 65 of 87 for 520 yards with six touchdowns and three interceptions in two games since returning from injury. ... Mike Gesicki ranks third among NFL tight ends with 37 catches and 427 yards receiving. He’s had seven or more catches and 85 yards receiving in each of his past two outings. ... Rookie WR Jaylen Waddle had six catches for 48 yards in his first meeting against the Bills. ... Howard got his second interception of the season last week to up his career total to 24, which leads the NFL since 2017. ... The Dolphins have just nine plays of 25 yards passing or more this season, while having allowed 20 against them, including two against Buffalo last month. ... The home game is Buffalo’s only one over a six-week span. ... The Bills are 4-0 under coach Sean McDermott coming out of their bye week. ... Allen finished 35 of 47 for 353 yards passing and three TDs with one interception against Tennessee. Including playoffs, his career record dropped to 11-1 with 300 or more yards passing, and 16-15 when committing a turnover. ... WR Stefon Diggs is 2 yards receiving shy of 2,000 since being acquired by Buffalo in a trade with Minnesota in March 2020. ... PK Tyler Bass is tied for the NFL lead with 63 points, having converted all 21 extra-point attempts and 14 of 15 field-goal chances. ... Buffalo allowed four TDs rushing against Tennessee, which is the most since giving up six in a 47-10 loss to New Orleans on Nov. 12, 2017. The Dolphins have combined for 471 yards rushing, while scoring seven TDs rushing versus five TDs receiving, in their past six meetings against Buffalo.

FANTASY TIP: Avoid any and all Dolphins. Bills RB Devin Singletary, who has lost playing time behind Zack Moss, had a season-best 82 yards rushing and scored his lone TD of the year on a 46-yard run in Buffalo’s first meeting with Miami.