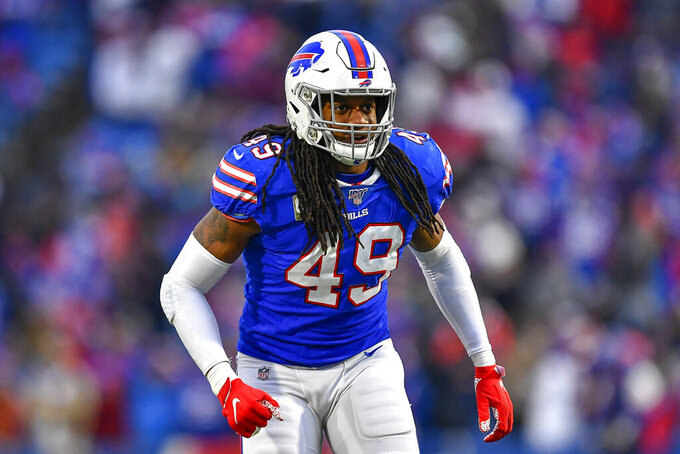 FILE - In this Nov. 24, 2019, file photo, Buffalo Bills middle linebacker Tremaine Edmunds (49) prepares for the snap against the Denver Broncos during the fourth quarter of an NFL football game, in Orchard Park, N.Y. Ferrell and Felicia Edmunds can't lose. Nor can they be prouder when the Pittsburgh Steelers host the Buffalo Bills on Sunday night, Dec. 15. It's a game that will feature all three of the Edmunds' sons _ the Steelers' Terrell and Trey Edmunds and the Bills' Tremaine _ facing off against each other. (AP Photo/Adrian Kraus, File)

ORCHARD PARK, N.Y. (AP) — Felicia Edmunds would rouse her three preteen boys from bed hours before school — and even on vacation — to put them through a rigorous daily workout of long runs and suicide sprints.

If Trey, Terrell and Tremaine Edmunds aspired to one day play in the NFL, Felicia's phys-ed teacher instincts kicked in by knowing they weren't going to get there by sleeping in or lying around all summer.

"Once they made the decision that this is what they wanted to do, then I said, 'OK, it's time to go to work because you can't achieve it by just saying it,'" she told The Associated Press by phone Wednesday. "You have to want it. And you have to put the time in."

Edmunds, a one-time college track star and wife of former NFL tight end Ferrell Edmunds, laughed at the memory, because in no way did she anticipate how things would unfold.

Not only are all three sons playing in the NFL, they'll all be on the field Sunday when the Buffalo Bills (9-4) travel to face the Pittsburgh Steelers (8-5) in a prime-time showdown of AFC playoff contenders.

The Steelers feature two of the Edmunds, with Terrell a second-year starting safety and Trey a backup running back and special teams contributor. The Bills' defense is anchored by second-year middle linebacker Tremaine Edmunds.

Per the Elias Sports Bureau, the Edmunds will become the first trio of brothers to appear in the same NFL game since Joe, Cobb and Bill Rooney all played for the Duluth Eskimos in 1927.

"It is iconic. It's spectacular. It's amazing. It's a blissful event," Felicia Edmunds said.

"I'm going to root for both teams," she added, before cracking a joke. "This will be the first time for me that no matter what call the refs make, it will not be a wrong call in my book."

The same, of course, can't be said for the Edmunds brothers.

Growing up competitive whether playing tackle football in the backyard or pickup basketball, they're eagerly awaiting to take their sibling rivalry onto a national stage.

"I think the easiest way to put it I guess is bragging rights," Buffalo's Tremaine Edmunds said, recalling how there would be times they couldn't make it up the basketball court without someone tackling the other. "Every time we step foot and do something, the only goal in our mind is to win. And nothing's going to change on Sunday."

Asked how long the loser or losers will hear about it, he answered: "Probably until we play again."

Terrell Edmunds is curious about the rooting interests involving a busload of family members expected to attend the game.

"It's going to be funny to see how they're going to split it up," he said. "It's a home game for us. Hopefully they pick the right jersey to wear."

A family dinner is planned for Saturday, and the three plan to swap jerseys following the game.

In between, all bets are off for the Edmunds, who are separated by 3 1/2 years. They all played college at Virginia Tech, though Trey eventually completed his career by transferring to Maryland.

Trey, the oldest, at 24 was the first to reach the NFL. He was signed as an unrestricted free agent with New Orleans in 2017, and is in his second year in Pittsburgh.

Tremaine and Terrell previously made history by becoming the first brothers selected in the first round of the same draft. Buffalo traded up to pick Tremaine 16th overall, while the Steelers took Terrell 28th.

Terrell recalled how Trey would win most of the battles because he was the biggest of the three through high school.

"Trey was pretty much the big dog running around the house," Terrell said, when asked which of his two brothers might have the edge Sunday. "I guess we're going to have to see. One of them has to win."

Same goes for the teams.

The Bills can clinch a playoff berth with a victory. The Steelers have won seven of eight to climb into the race for one of the AFC's two wild-card berths.

Bills coach Sean McDermott credited Edmunds' parents for the job they've done raising Tremaine, who has matured into a team leader at 21.

Tomlin broke into a laugh when asked to recall whether Terrell or Tremaine did most of the talking during the Steelers' pre-draft visit to Virginia Tech.

Looking back, Tremaine can appreciate those early morning workout sessions run by their mother. Difficult as it was to sometimes get out of bed, they proved invaluable in helping all three get this far.

"If there was ever a time when one of us probably didn't feel like doing something, we could always lean on the other one to somehow bring it out of us," he said.

"Everybody, I think, needs somebody to push them to that next level, and I think that's one thing that we all did," Tremaine Edmunds said. "We'd push each other to be better men, just everything. I can't thank them enough."