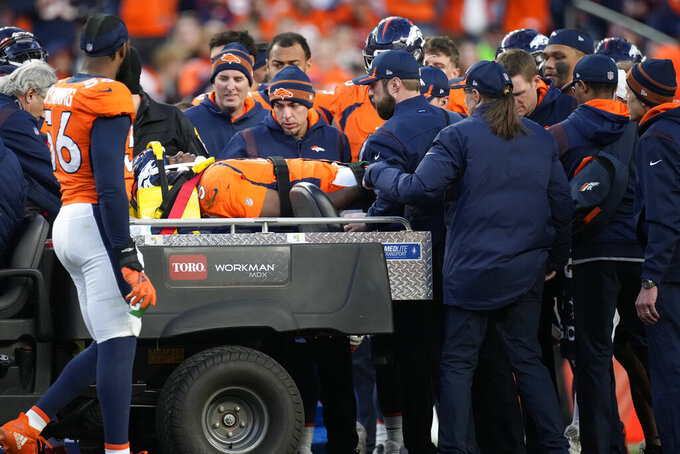 Denver Broncos quarterback Teddy Bridgewater is placed on a cart after being injured against the Cincinnati Bengals during the second half of an NFL football game, Sunday, Dec. 19, 2021, in Denver. (AP Photo/David Zalubowski)

DENVER (AP) — Khalid Kareem snatched the ball from backup quarterback Drew Lock on second-and-goal and the Cincinnati Bengals seized a first-place tie with the Baltimore Ravens atop the AFC North with a 15-10 win over the Denver Broncos on Sunday.

Another football was waiting for Kareem in the visitor's locker room after his fourth-quarter heroics with the Broncos (7-7) threatening to retake the lead.

“It’s game-ball worthy, no question about that,” coach Zac Taylor said after the Bengals (8-6) strengthened their grip on their playoff quest in the logjammed AFC race while sending the Broncos' postseason hopes plummeting.

“A really big play by him to step up and take the ball away,” Taylor said. “Fumble, interception, whatever they’re going to call that, tremendous effort.”

“I should’ve handed that thing off to Javonte," Lock said. “But also, if I run that thing into the end zone, make the defensive end miss, who knows what’s being said right now?”

After wresting the ball from Lock, Kareem tumbled to the ground, bounced up and rumbled down the Broncos' sideline before left tackle Garett Bolles chased him down and hammered out the ball, then smothered the fumble at the Cincinnati 40-yard line.

It turned out Kareem, who left the game with a concussion while the play was being reviewed, was down at his 15-yard line, wiping away his giveback.

Lock and the Broncos would get two more chances but never really had a prayer, gaining just 18 yards on 10 plays.

Lock engineered Denver's only touchdown drive when he went in following a scary collision with linebacker Joe Bachie that sent Bridgewater off on a cart and to a hospital for further evaluation of a head injury. Bachie suffered a knee injury on the play and didn't return.

The Broncos said Bridgewater was moving his arms and legs and coach Vic Fangio said after the game that Bridgewater checked out OK but would be held overnight for observation.

Lock threw a 25-yard touchdown pass to Tim Patrick with 1:15 left in the third quarter, giving Denver a 10-9 lead, but Patrick was whistled for taunting after the score, which quickly came back to haunt the Broncos.

Brandon McManus had to kick off from his own 20 and Trent Taylor returned it to the Bengals 32. Two plays and 45 seconds after that, Tyler Boyd raced into the end zone with a 56-yard touchdown catch from Joe Burrow to make it 15-10 with 30 seconds left in the third quarter.

“That stinks,” Broncos safety Simmons said. “Defensively, you’re playing fairly well. Offense goes down and scores. We take a 1-point lead. The last thing you can do ... is give up a play like that."

“We have great players that can make plays, whenever they’re there,” Burrow said. "We didn’t make as many plays as maybe we would have liked, but we got the job done.”

BOYD TO THE RESCUE

The Broncos bottled up star rookie receiver Ja'Marr Chase and second-year wideout Tee Higgins. Chase was held to a single catch for 3 yards and Higgins had two receptions for 23 yards.

Boyd, however, burned the Broncos for 96 yards on five catches, including his long TD, a critical 19-yard reception that set up a field goal as the first half expired and a 15-yard reception on third-and-10 from his 22 that allowed the Bengals to chew up more clock and yards and forced Denver to burn its last two timeouts before getting the ball back with a minute left.

“We could have played better overall as a team,” Simmons said. “Defensively, the glaring thing for me was no takeaways. You can say what you want but we didn’t get any takeaways. It’s tough to win like that.”

The Bengals took a 6-3 lead into the locker room on a big turn of events in the final 9 seconds of the first half.

Brandon McManus was wide right on a 51-yard field-goal attempt and Cincinnati took over at its 41. A 19-yard pass over the middle to Boyd brought Evan McPherson trotting onto the field to kick a franchise-record 58-yarder as time expired.

The Broncos were without starters ILB Kenny Young (concussion) and DE Dre'Mont Jones (foot) and CB Ronald Darby came out for a concussion evaluation.

Bengals: host the Baltimore Ravens on Dec. 26, seeking their first sweep of their AFC North rivals since 2015.