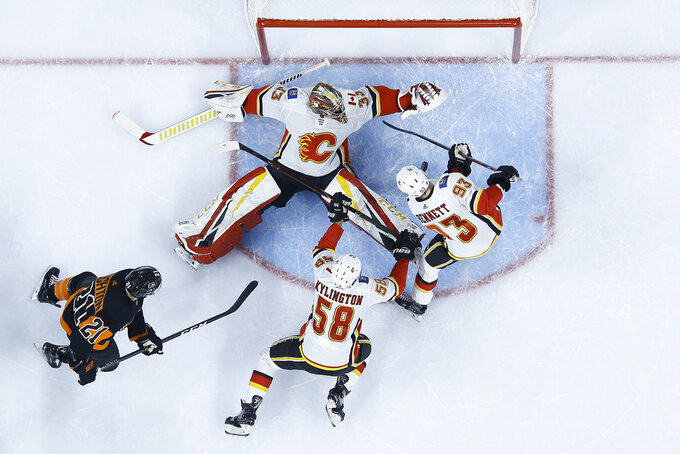 PHILADELPHIA (AP) — The Flames just needed to get out of their own way.

TJ Brodie scored 1 minute, 59 seconds into overtime after Matthew Tkachuk tied it with 4:17 left in regulation to lead Calgary to a 3-2 victory over the Philadelphia Flyers on Saturday.

Tkachuk assisted on the winner in the 3-on-3 extra session. Philadelphia's Jordan Weal turned the puck over in the Flyers offensive zone to set up a 2-on-1 break. Tkachuk sent a cross-ice pass to Brodie, who beat goalie Carter Hart to lift the Pacific Division leaders to the win.

"Not every game is going to be pretty and these are the games that make a difference at the end of the year," Brodie said.

Calgary committed five penalties, including two for too many men on the ice, resulting in four Philadelphia power plays. The Flames also gifted the Flyers a go-ahead goal in the third period when goalie David Rittich misplayed the puck way out in front of his crease.

When it mattered, though, Calgary figured out how to do what it has been doing all season — win.

"We settled in and found a way to get it done," coach Bill Peters said. "That's a greasy road win."

Johnny Gaudreau notched his 24th goal of the season for the Flames, whose 56 points are tops in the Western Conference.

Travis Sanheim and Travis Konecny scored for Philadelphia, which dropped its season-worst sixth straight game. The Flyers are in last place in the Metropolitan Division; they entered tied with Los Angeles and Ottawa for the fewest points in the league.

It has been a forgettable season for the Flyers, who already have replaced their general manager and coach.

"It's tough because we're playing good hockey," Konecny said. "It just seems like teams are just scoring on the one opportunity that they're getting. It usually doesn't go that way, but that's just the way it's going for us right now."

Tkachuk tied it with 4:17 left in regulation when he beat Hart past the right pad with a wrist shot from the slot.

Konecny had given Philadelphia a third-period lead, taking advantage of a mistake by Rittich to put the Flyers ahead 2-1 at 5:57 of the period. With Philadelphia's Claude Giroux applying pressure on defenseman Rasmus Andersson, Rittich came way out of his crease to play the puck.

Konecny intercepted Rittich's clearing attempt, and then fired a wrist shot from the left circle past the retreating Flames goalie for his 10th of the season.

The victory was a sigh of relief for the Flames goalie.

"I made a mistake that almost cost us the game, so I was happy," he said.

Asked if he spoke to Tkachuk after the tying goal, Rittich said, "Yeah. 'Thanks bro, I love you.'"

Gaudreau tied it at 1 with a pretty wrist shot from the right circle that whizzed over Hart's left shoulder during 4-on-4 play in the second period.

The 20-year-old Hart returned to the net after Michal Neuvirth suffered a lower-body injury in Philadelphia's 5-3 home loss to Carolina on Thursday, continuing the Flyers goalie carousel.

The rookie was solid, if not spectacular, and couldn't be faulted for any of the goals.

"I was seeing the puck," he said. "I felt comfortable. I wasn't overthinking things and just stuck to my game."

Veteran journeyman Mike McKenna was signed on Friday to back up Hart, who was making his sixth career start. If McKenna dresses for the Flyers, he would become the seventh goalie to suit up and that would tie an NHL record.

Sanheim got the Flyers on the board with a power-play goal with 7:50 left in the first period. His pass, which was intended for Weal in front of the net, caromed off the skate of Brodie and over the right shoulder of Rittich.

Rittich returned after missing the previous two games with a lower-body injury and made 32 saves.

Notes: Gaudreau, a native of South Jersey and a Philadelphia Eagles fan, will attend Sunday's Eagles-Bears NFL playoff game in Chicago with some teammates. ... Flyers C Nolan Patrick was back in the lineup after sitting out the past four games with an upper-body injury. ... The teams also went to overtime in their first meeting, a 6-5 home win by Calgary on Dec. 12. ... The Flames have scored 63 third-period goals. They entered the game leading the league in that category.

Calgary: At Chicago on Monday night.