Broncos knew what was coming but still couldn't stop it 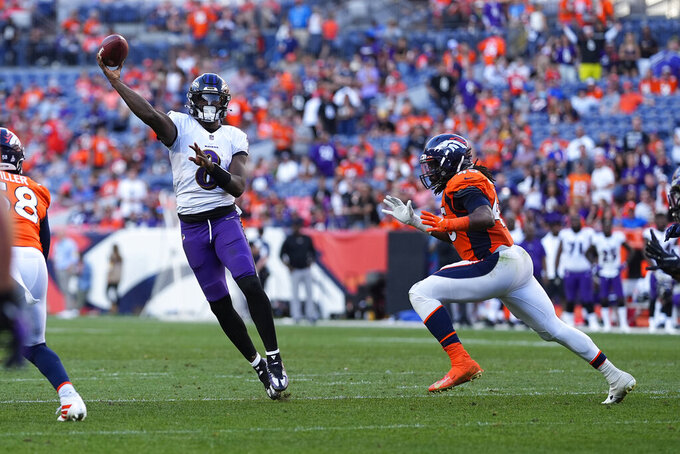 DENVER (AP) — Vic Fangio didn't appreciate John Harbaugh's decision to have Lamar Jackson sweep left on the final snap of Baltimore's 23-7 win in Denver just so the Ravens could match the longest streak in NFL history of 100-yard rushing games.

“I thought it was kind of bull (expletive)," the Broncos coach said Monday when asked if he had a problem with the Ravens not just taking a knee.

“But I expected it from them,” added Fangio, who was on Harbaugh's first coaching staff in Baltimore 14 years ago. “Because that’s just how they operate. That’s just their, you know, mode of operation; player safety is secondary.”

Harbaugh was taken aback by Fangio's harsh words, saying, “I thought we were on good terms. We had a nice chat before the game. Known each other for a long time. But I promise you, I’m not going to give that insult one second thought. What’s meaningful to us might not be meaningful to them.”

Harbaugh then took a shot at the Broncos for trying to score a meaningless TD in the closing seconds, saying, "I don’t know that there’s a 16-point touchdown that’s going to be possible right there, so that didn’t have anything to do with winning the game.”

The Broncos (3-1) had limited the Ravens to 97 yards on the ground, including just 23 by Jackson, his lowest total in almost a year, when Baltimore cornerback Anthony Averett intercepted a Drew Lock pass in the end zone with 3 seconds left.

Harbaugh jumped at the chance to go for the record. Instead of lining up in victory formation, Jackson took the shotgun snap and swept left for 5 yards, pushing the Ravens over the century mark for the 43rd consecutive game.

“Oh yeah, 100% my call,” declared Harbaugh enthusiastically and unapologetically after the game, explaining it was important to his players and coaches to match the mark set by the Pittsburgh Steelers from 1974-77.

A disgusted Fangio threw his headset to the ground after the final play, but didn't voice his displeasure in his postgame handshake with Harbaugh.

“Thirty-seven years in pro ball, I've never seen anything like that,” Fangio said Monday. “But it was to be expected, and we expected it.”

That's how it went all afternoon for the Broncos: they knew exactly what was coming and they were powerless to stop it.

The 1-2 punch of RBs Melvin Gordon II and rookie Javonte Williams, who seemed to drag Baltimore's entire defense on a 31-yard rumble in the first half. But OC Pat Shurmur abandoned the run even though the pair averaged 6.5 yards per pop and his QB combo was 19 for 37 for 178 yards with five sacks. The Broncos ran just four times in the second half.

A secondary that was pitched as the NFL's best got beat by Jackson, speedy WR Marquis Brown and TE Mark Andrews. Jackson's 316 passing yards was the third most of his career.

Rookie S Caden Sterns had two of the Broncos' three sacks a week after he had his first career interception.

Tom McMahon's special teams units own this category for their habitual breakdowns (this time it was a 42-yard punt return they allowed that led to a field goal as the first half ended).

“Yeah, we seem to have one play a game that pulls it down,” Fangio said when asked why the leaky special teams has been so hard to fix. “It's a good question, obviously one we've got to fix. We've been trying.”

10 — the number of punts by Sam Martin, who had punted just nine times coming into the game.

The Broncos are now down nine starters with quarterback Teddy Bridgewater in concussion protocol and rookie CB Patrick Surtain (ribs) day to day along with WR/KR Diontae Spencer (chest).

The hits to Bridgewater and Spencer should have been flagged, Fangio argued.

The Broncos may have to go with Lock at Pittsburgh (1-3) next weekend, and he won't have the excuse of being rusty again.