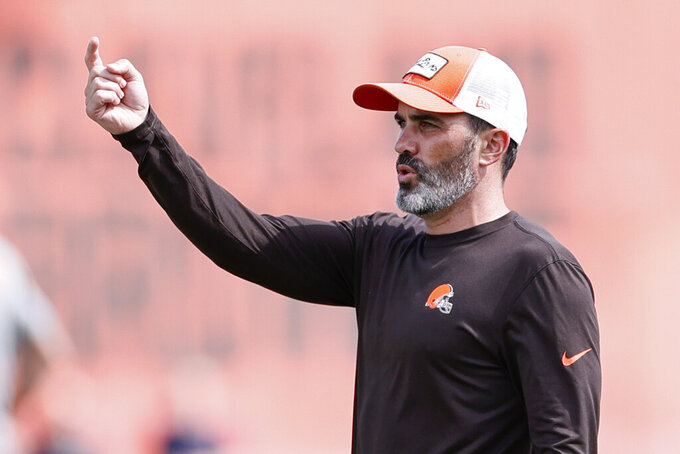 Cleveland made the moves following practice on Wednesday, shortly after coach Kevin Stefanski said Phillips had undergone surgery on a torn biceps.

Jackson will be the team's No. 4 end behind Myles Garrett, Jadeveon Clowney and Takk McKinley.

Phillips got hurt during Cleveland's recent joint practice with the New York Giants. Stefanski said the third-round pick in 2020 has been rehabbing at the team's facility.

"Hopefully, he attacks this rehab like I know he will and then see where we are as he gets healthy,” Stefanski said

Phillips was expected to be in the Browns' rotation of linebackers this season. There's a chance he could come back at some point.

The 26-year-old Mullens give the Browns an experienced No. 3 QB. He went 5-11 as a starter for San Francisco from 2017-20. Wearing No. 9, Mullens went through his first workout Wednesday with Cleveland's other players.

“The thinking is get a quarterback in here, take a look at him,” Stefanski said. “He has some prior experience in this system. (Offensive assistant) T.C. McCartney was with him in San Francisco, so had some intel on him as a person and a player.”

“I got to talk to a bunch of those guys yesterday, and you really do want what’s best for them,” Stefanski said. “So if guys land on another 53, you’re happy for them. When they don’t, you want them to be here because we know them."

“We feel like we’re a big part of their development.”