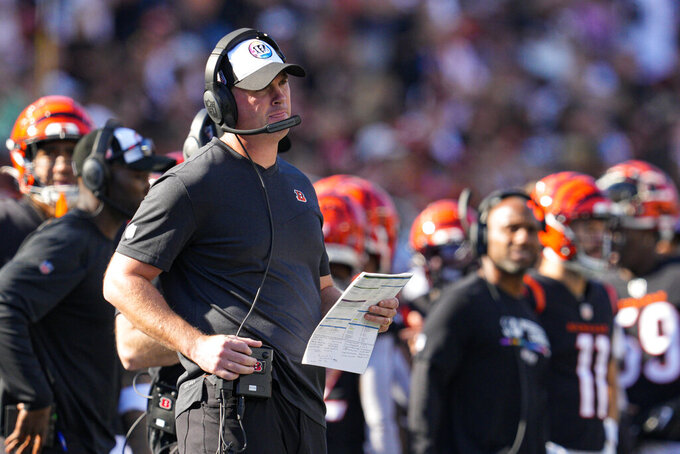 Cincinnati Bengals head coach Zac Taylor on the sidelines in the second half of an NFL football game in Cincinnati, Sunday, Oct. 23, 2022. The Bengals defeated the Falcons 35-17. (AP Photo/Jeff Dean) 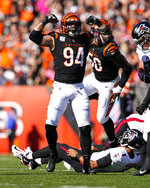 CINCINNATI (AP) — Joe Burrow last week predicted the next three games on the Cincinnati Bengals' schedule — those leading up the bye week — would determine how the rest of the season will go for the defending AFC champions.

So far, so good. Better than good, actually.

The Bengals quarterback had the second-best game of his three-year career on Sunday, torching the Atlanta Falcons with 481 passing yards and three touchdowns in a 35-17 win that was never close.

The Bengals (4-3) moved over .500 for the first time this season and remained tied with Baltimore for first place in the AFC North.

The next two opponents in that Burrow triumvirate are the Cleveland Browns, losers of four straight, and the Carolina Panthers, who just snapped a three-game skid with a 21-3 win over Tom Brady and the Tampa Bay Buccaneers.

Burrow is finally getting consistently good protection in the pocket and his receivers — arguably the best set of wideouts in the NFL — are catching everything thrown near them and blowing away defensive backs after they do.

Tyler Boyd, at 27 the elder statesman of the group, caught eight of his nine targets Sunday for a career-high 155 yards and a 60-yard touchdown two minutes into the game.

Ja'Marr Chase, the reigning Offensive Rookie of the Year, had eight catches for 130 yards and two touchdowns. Tee Higgins caught five and came up 7 yards short of getting a 100-yard game for himself.

Despite missing some key players, the Cincinnati defense held the Falcons' Marcus Mariota to eight completions for 124 yards and a touchdown while containing the running game, which has been Atlanta's primary weapon.

“It was a pretty complete game,” Burrow said. “Good to see. You'd like to score on every possession. I thought we could have. So we left something out there, but overall it was a complete effort.”

After an 0-2 start, the Bengals have won four of five.

“Consistency is the next step,” Burrow said. “Every single game we've had spots where we're really good, and it's about sustaining it over a whole game. We have to string together games like that. We've done that for two weeks and we have to keep doing it.”

The retooled offensive line was expected to heal everything that was ailing the Cincinnati offense, and the Bengals were criticized when the five guys didn't immediately click. They've improved significantly since. Burrow had time Sunday to drop back and survey the field, which yielded big results.

Joe Mixon is still playing solid, hard-nosed football, but the running game has been an afterthought. Mixon gained 58 yards on 17 carries (3.4 yards per carry) against the Falcons. After rushing for 1,205 yards last season, he has yet to top 100 in a game in 2022. He did have three catches for 33 yards against Atlanta.

Hakeem Adeniji was excellent in pass protection filling in when RT La'el Collins left with an injury. ... DT Jay Tufele had a solid game filling in for injured interior linemen D.J. Reader and Josh Tupou. He was credited with four stops and no missed tackles. ... Seldom-used DE Joseph Ossai had two quarterback pressures and his first NFL sack on just seven pass-rush snaps.

The expectations for free agent right tackle Collins were huge, but he's been limited by injuries. A sore back that sidelined him in training camp has lingered. He went to the locker room with an ankle injury in the first half on Sunday but came back and played in the second half, missing 26% of offensive snaps.

5 — Number of 400-yard passing games in Burrow's first three years in the league. He's the first quarterback in NFL history to do that.

Build on the momentum. Seeking their first conference win, the Bengals play the rival Browns on Halloween night in Cleveland.