Burrow is fine, but Bengals may be without Mixon, Higgins 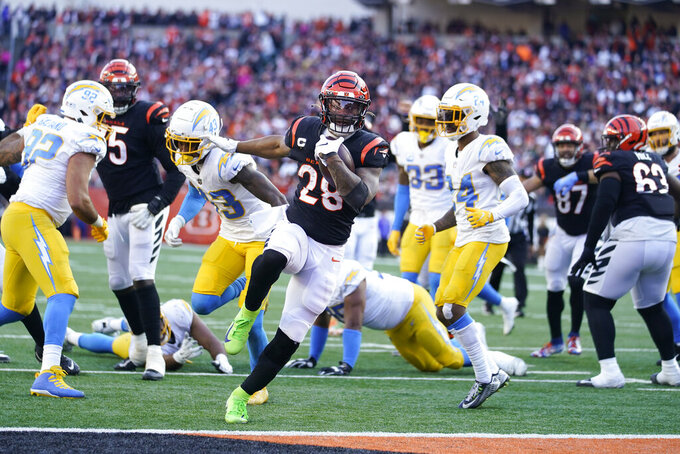 Cincinnati Bengals' Joe Mixon (28) runs in for a touchdown during the second half of an NFL football game against the Los Angeles Chargers, Sunday, Dec. 5, 2021, in Cincinnati. (AP Photo/Michael Conroy)

CINCINNATI (AP) — Quarterback Joe Burrow and his sore pinky finger are fine, but the Cincinnati Bengals could be without other key players, including running back Joe Mixon.

Mixon is listed as questionable due to an unspecified illness for Sunday's home game against the San Francisco 49ers. Receiver Tee Higgins (ankle) and cornerback Chidobe Awuzie (foot) also are questionable.

The Bengals had previously announced that their best linebacker, Logan Wilson, will miss at least a couple of weeks after suffering a shoulder injury in last Sunday's loss to the Chargers.

Burrow dislocated the little finger on his right hand on the first possession last Sunday. He stayed in the game, but his finger was sore and swollen. He was held out of practice on Wednesday but was back with full participation on Thursday.