Cam Newton: Focus is on present, the past is 'irrelevant' 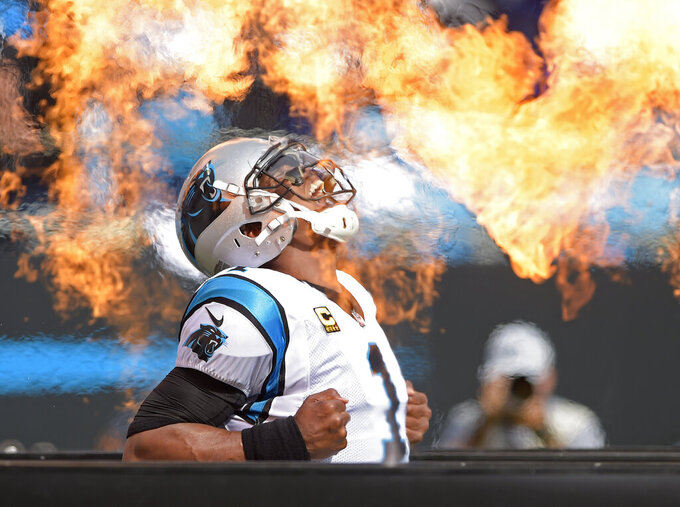 FILE - Carolina Panthers' Cam Newton (1) reacts at he is introduced before an NFL football game against the Dallas Cowboys in Charlotte, N.C., Sunday, Sept. 9, 2018. According to a person with knowledge of the situation, the Carolina Panthers have agreed to a one-year contact to bring quarterback Cam Newton back to the franchise that drafted him No. 1 overall in 2011. The person spoke to The Associated Press on condition of anonymity Thursday, Nov. 11, 2021, because the deal has not been announced by the team.(AP Photo/Mike McCarn, File)

CHARLOTTE, N.C. (AP) — Cam Newton was back home in Atlanta enjoying being a father and about to partake in one of his new favorites “taco Tuesday” for dinner when he glanced at his phone and noticed he'd missed a call.

“Matthew Rhule,” Newton said to himself as he read the caller ID.

Upon seeing the name of the Carolina Panthers' head coach — and later talking to him — Newton said he felt like he was “floating.” He became filled with a sense of exhilaration with the possibility or returning to an organization with which he'd spent nine seasons, earned an MVP award and led to the Super Bowl in 2015.

Within 48 hours Newton was on his way back to Charlotte, North Carolina, signing a one-year $10 million contract to finish the season with the Panthers.

Newton made it clear in a 30-minute teleconference Friday that he doesn’t hold any grudges about the Panthers releasing him prior to the 2020 season after he’d lost his previous eight starts while battling through shoulder and foot issues. He called the past “irrelevant” to him now.

The 32-year-old quarterback said his focus is on living in the present — and helping the Panthers (4-5) turn around things after losing five of their last six games.

“I'm in a position where it could easily be just about Cam,” Newton said. “This is not that type of a vibe. I'm happy to be here, and I want everybody to know I'm happy. But, it's time to win. So that is where all of my energy is.”

His energy, particularly, is on learning offensive coordinator Joe Brady's playbook as a quickly as possible. To do that, Newton is planning to stay extra hours at the stadium and said he's turned off his social media accounts.

Just how soon Newton can help the Panthers is uncertain.

Rhule first said Friday it is “not very likely” that Newton would play Sunday at Arizona after missing most of the game installation this week. Rhule quickly added “that might change" after seeing where Newton is following Saturday's practice.

Either way, Rhule said P.J. Walker will start and Matt Barkley, signed off the Tennessee Titans’ practice squad earlier this week, will be his backup. So if Newton is active he'd be the team's third quarterback.

Newton will travel with the team to Arizona.

The most likely scenario will be for Newton to have a small package of plays against Arizona and then start at quarterback the following Sunday against his former coach Ron Rivera and the Washington Football Team.

“Obviously, Cam is just getting started for us, so it’s probably more realistic to shoot for next week,” Rhule said.

This is the first time in his 11-year NFL career that he's joined a team midseason and had to spend time cramming to learn a new offense. There is also the matter of him being out of football for the past 2 1/2 months since being released by the New England Patriots on Aug. 31.

“I have to be realistic with expectations," Newton said. "I have to realize you haven't pushed your body to really take on the (pounding) of what has been asked of you. Mentally, you're going to be like, ‘man, I'm me.' But physically it is what it is. I pride myself on being ready and now it's just being realistic with what the expectation is and performing when that opportunity presents itself.”

Newton said he had three requirements before returning to the NFL. He wanted to join a playoff contender, to have a chance to play, and to join an offense surrounded by talented players (like Christian McCaffrey) with strong skill sets.

“Check, check, check — it was no-brainer," Newton said of returning to Carolina.

NOTES: Panthers defensive end Brian Burns, who injured his ankle last week when Patriots quarterback Mac Jones grabbed a hold of his leg to prevent a touchdown following a sack/fumble, is expected to play against Arizona. Burns is listed as questionable, but was a full participant in practice. ... Carolina has ruled out cornerbacks Stantley Thomas-Oliver and Rashaan Melvin for Sunday.